The hosts cracked several jokes about the #MeToo movement and diversity in television following a musical performance from their Saturday Night Live colleagues Kate McKinnon and Kenan Thompson that established the evening’s theme. The SNL stars sang in jest about “solving” the lack of diversity and issues of sexual harassment in a performance that included Kristen Bell, Sterling K. Brown, John Legend and Tituss Burgess.

Following the song, Che and Jost, host of SNL‘s “Weekend Update,” took the stage, and some of their best material went after the many men who have been implicated as the #MeToo movement has grown in the last year.

“It is an honor to be here sharing this night with the many, many talented and creative people in Hollywood who haven’t been caught yet,” Che said.

Jost responded: “That’s right. This year, the audience is allowed to drink in their seats. Hope you’re excited about that. Because the one thing Hollywood needs right now is people losing their inhibitions at a work function.”

“Netflix, of course, has the most nominations tonight. That’s right. And if you’re a network executive, that’s the scariest thing you can possibly hear except maybe, ‘Sir, Ronan Farrow is on line one.'”

Che and Jost also touched on the revival of Roseanne, which saw controversy after Roseanne Barr posted a racist tweet and was subsequently fired, while discussing how shows like Brooklyn Nine-Nine and Last Man Standing have been cancelled and then picked up by other networks.

“Roseanne was cancelled by herself, but picked up by white nationalists,” Jost said.

Che then added that he heard: “Roseanne is actually moving to Israel.”

“How messed up is your life when you have to go to the Middle East just to get a peace of mind?” he asked. “By the way, congratulations to Laurie Metcalf. You know how great an actress you have to be to get nominated for Roseanne now? That’s like nominating a cop for a B.E.T. award.” 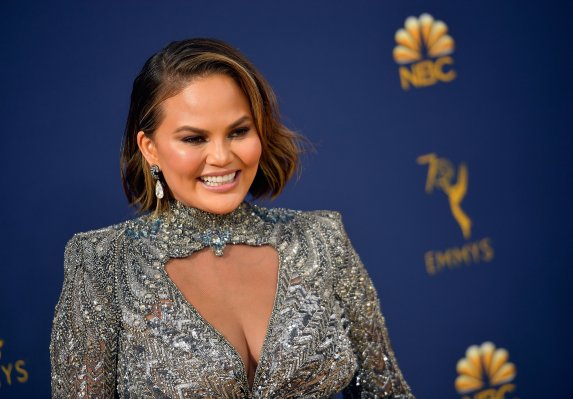 Chrissy Teigen’s Emmys 2018 Reaction Is Already an Internet Sensation
Next Up: Editor's Pick