Town Behind Viral Hurricane Florence Video Has Seen Floods Before. But Never Like This

The residents of Belhaven, North Carolina, know flooding. Most of the the homes in the town of 2,000 on the Pungo River in the Inner Banks region are built on stilts or have second-floor living spaces.

But they weren’t prepared for Hurricane Florence.

Videos from the small town have gone viral. One, posted by Amy Powell Johnson, has been viewed more than 980,000 times on Facebook and another 400,000 times on Twitter. They were some of the first images of the sheer volume of flooding that Hurricane Florence’s storm surge brought inland.

“This one is just particularly scary because the water is so high,” Belhaven resident Michelle Hooper tells TIME. “Higher than we’re used to, but we are used to a lot of water. A lot of places are going to get flooded out.”

The National Weather Service reported that storm surge levels for parts of eastern North Carolina had already reached the levels of Hurricane Irene in 2011, when the water rose more than 7 feet in some places.

Hooper, who left under a voluntary evacuation order and went inland, has been receiving updates from her neighbors since Thursday night and posting them to her Twitter account.

Hooper, a longtime resident who says she’s ridden out hurricanes in Belhaven since the 1990s, is glad she got out this time.

“It is stupid to stay with a storm like that,” Hooper says. “But at the same time if you’ve been through these storms for decades in the same home you know where your boundaries are.”

During the night, one of Hooper’s friends sent her a video that showed surging waves washing under the porch of her house. Another sent a picture of neighbors kayaking down the street to check on their business during a period of calm this morning.

But for residents who chose to stay behind in this resilient waterfront town, the ordeal may be far from over. Some may have gotten more than they bargained for.

“We don’t ever get hurricane-related deaths, it’s never that serious,” says Hooper. “I guess because we’re so prepared for it and used to it there’s just a plan always. But this one, I don’t know. Those waves were big in that video. It is scary. It’s still happening.” 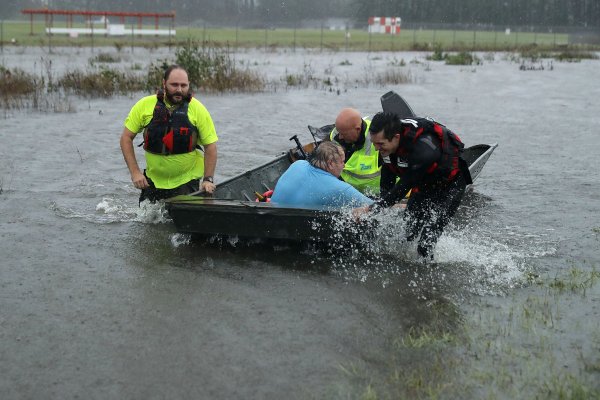