Hurricane Florence Is Exposing Major Problems With How We Categorize Storms

Hurricane Florence, once a Category 4 storm, was downgraded to Category 1 before it made landfall near Wrightsville Beach, North Carolina early Friday morning. But experts say that despite the apparent demotion, Hurricane Florence still stands to be a destructive and deadly storm for those in its path.

“Just because the wind speeds came down … please do not let your guard down,” Federal Emergency Management Agency (FEMA) Administrator Brock Long said at a press conference Thursday, during which he highlighted dangers like flooding from storm surge. “This is a very dangerous storm. Storm surge is why many of you have been placed under evacuation and we are asking citizens to please heed a warning. Your time is running out.”

Indeed, Hurricane Florence’s rapid downgrade from a Category 4 to a Category 1 underscores a potential public safety issue with the way hurricanes are measured and discussed. Hurricanes are categorized using what’s called the Saffir-Simpson Hurricane Wind Scale, which takes only a single measurement into account: the speed of a hurricane’s sustained winds. A hurricane is considered Category 1 if it has sustained wind speeds of 74 miles per hour (mph) to 95 mph, Category 2 with speeds between 96 mph and 110 mph, and so on. But hurricanes like Florence bring dangers beyond high winds, most notably storm surge and flash flooding.

“Florence is an excellent example of a storm that is a lower category than it was and yet is still extremely dangerous,” said Dr. Bill Lapenta, director of the National Centers for Environmental Prediction at the National Weather Service, in an interview Thursday. “It was a Category 4 [Wednesday] and since then it’s a Category 2, which simply means its sustained winds have decreased. But when you look at the magnitude of the dangers that have been predicted, that hasn’t changed.”

In the case of Hurricane Florence, one specific shortfall with the Saffir-Simpson scale is quickly becoming apparent: While it measures the wind speeds a hurricane is producing, it doesn’t take into account the speed at which a hurricane itself is moving. Those are often vastly different figures — while hurricanes can produce wind speeds of up to 150 mph and more (the average speed of an Indianapolis 500 race car), the storms themselves tend to prod along at speeds as slow as 5 or 10 mph, especially as they begin to hit land. A hurricane’s speed can determine how dangerous they are, as slower storms can dump biblical amounts of rain and create other hazards in a more limited area over longer periods of time. That, in turn, increases the risk for those in a hurricane’s path.

“As Florence approaches the southeast coast, it might be moving only 4 miles per hour, which is the speed I walk,” said Lapenta. “That results in people being exposed to hurricane-force winds much longer than they would otherwise have been, and that in turn effects inland flooding.” Other threats, like storm surge, aren’t measured or predicted by a given hurricane’s category either.

Any shortcomings with the Saffir-Simpson scale can have life and death consequences. Hurricane categories have become a convenient shorthand for residents, officials and the media looking to understand and convey the threat a storm presents. But a hurricane’s category alone often fails to adequately communicate that threat. That means people may be making ill-informed decisions about whether to evacuate their homes or ride out a hurricane and risk their lives in the process. And when hurricanes get downgraded right before making landfall, some people may wrongly interpret that as a sign of a lessened threat.

“We really have to think about the different types of ways of explaining the risks,” says Dr. Tricia Wachtendorf, a sociology professor and the associate director of the Disaster Research Center at the University of Delaware. Part of the solution, she says, lies in presenting residents with a more detailed, multifaceted picture of the storm that they are about to face. “Having a classification system or a cone of uncertainty is one approach, but that has to be balanced with other information as well,” she says.

Many meteorologists, officials and others have taken that advice to heart, especially after devastating storms like Hurricane Katrina, Hurricane Harvey, and Hurricane Maria. In the lead-up to Hurricane Florence, newscasters and political leaders pounded home the idea that, even if Hurricane Florence gets downgraded, it’s still expected to be a disastrous event. Meanwhile, the National Weather Service is working on other ways to communicate a hurricane’s threat. One product, for instance, aims to predict where flash flooding may occur up to three days in advance, Lapenta says.

The task facing forecasters and officials will continue to be providing residents with enough, but not too much, information leading up to a hurricane. “Part of the challenge is [balancing] the simplicity of the information when you talk about a category — and that can be really useful as you’re trying to convey information that’s as simple as possible — with the nuances and details that might be provided.” said Dr. Wachtendorf. In the case of Hurricane Florence, the warnings have certainly been straightforward. “My message is clear,” said North Carolina Governor Roy Cooper at a press briefing Wednesday. “Disaster is at the doorstep and it’s coming in.”

— With reporting from Jeffrey Kluger

The original version of this story misstated Dr. Tricia Wachtendorf’s position. She is the director of the Disaster Research Center, not the associate director. 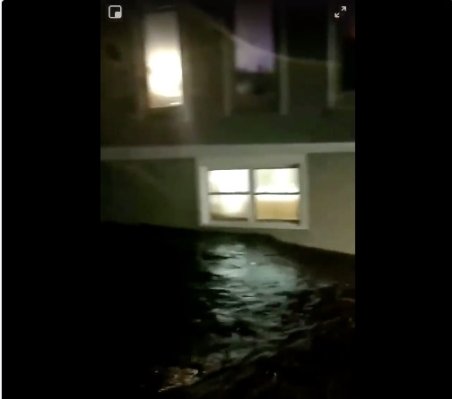 Town Behind Viral Hurricane Florence Video Has Seen Floods Before. But Never Like This
Next Up: Editor's Pick