The End Is Near for Haider al-Abadi, Iraq's U.S.-Friendly Leader

When Iraqi Prime Minister Haider al-Abadi finally arrived in Basra on Monday, he was clearly not welcome. “You only care about oil and border crossings and not how the people of Basra live,” read banners hung from fences and buildings in the city. “The people of Basra denounce the presence of the outgoing Abadi.”

Days of anti-government demonstrations in southern Iraq’s most populous city left more than a dozen protestors dead, and seem to have all but sealed the fate of Abadi, the U.S.-favored prime minister who has been in office since 2014. The blame for the Basra unrest is being put on Abadi, and other party leaders are calling on him to resign.

Abadi had been hoping for another term in office after the May parliamentary elections, which failed to produce a majority for any of the country’s political parties. The vote has been followed by months of political negotiations among Iraq’s political blocs.

As Abadi stood in Basra blaming those other political blocs for the unrest, protestors walked mournfully through streets carrying Iraqi flags, flowers and pictures of young men killed in clashes with security forces.

After taking power a little over four years ago, Abadi led Iraq through the battle against ISIS and personally announced the defeat of the militants. But now, with ISIS mostly gone, Iraqis are looking for the leader to fulfill his other promises of fighting corruption and bringing the country’s many militias under government control. In a January interview with TIME, Abadi said his ultimate goal post-ISIS was to “deliver to the people.”

But increasingly, the people have grown impatient. “All Basra got from Abadi…were promises,” says Amir al-Hussein, a hospital receptionist in the city. “That is why we have lost faith in him.”

Over the weekend protestors took to the streets burning government building and chanting against Iraq’s politicians. They demanded the lack of basics services in the oil-rich city, which suffers shortages of water and electricity. “This is why people are demonstrating,” said Hussien, “not because they want to help politicians throw blame on each other or help them create powerful blocs in parliament.”

Iran and the U.S. have long been in competition for influence over Baghdad, despite sharing an enemy in ISIS. Now, the countries’ interests in Iraq are even more divergent, with ISIS suppressed and tensions growing between Washington and Tehran since the collapse of the Iran nuclear deal.

The White House warned Iran on Tuesday that it would hold Tehran accountable for any attacks against U.S. facilities in Iraq. “Iran did not act to stop these attacks by its proxies in Iraq,” the statement said, despite the fact that it was the Iranian consulate that was burnt down by protestors in the mostly-Shi’ite city, not the American.

For years, Iraqi leaders have successfully used sectarian ideology to rally support for their parties, agendas and foreign patrons. Renad Mansour, a fellow at Chatham House, says many Iraqis have had enough of identity politics and their leaders pandering to foreign backers, like the U.S. and Iran.

But these protests have not been about the sectarian divides that have plagued the country for decades and helped create a fertile ground for Sunni jihadists groups like ISIS and a plethora of Shi’ite militias. Instead, they are about living conditions and the government corruption that protestors say is robbing them of access to basic services.

The fault line is now between the people and their leaders, Mansour says. “You have Shi’ite Iraqis protesting against Shi’ite leadership and Shi’ite Iran. Being Shi’ite isn’t enough if you don’t have water or electricity.”

The Dawa party, which Abadi belongs to, has led Iraq since the first post-U.S. invasion government in 200. Many Iraqis, even in Dawa’s Shi’ite support base, are frustrated with the government’s inability to provide basic services under the party. Some local media and activists likened Dawa’s long, dominant rule to that of Saddam Hussein’s Baath party.

Frustration was already evident in May’s parliamentary elections. Voter turnout was at the lowest it’s been since the toppling of Saddam and Mansour says many Iraqis felt their votes were worth little in the country’s current political environment. Despite dropping in popularity, it seemed Abadi would get another term as prime minister—thanks to Iraq’s fractured, top-heavy political system.

Both the bloc headed by militia leader Hadi al-Amari, who is close with Iran, and the bloc of Shi’ite cleric Muqtada al-Sadr, who has preached against both U.S. and Iranian influence, won more seats than Abadi. But forming a government in Iraq’s fragile democracy requires a careful balancing act of party, sectarian and foreign interests. Abadi may not have been the most popular leader, but he was perhaps as the most malleable, inside and abroad.

Abadi was big on the rhetoric of fighting terrorism and welcomed U.S. forces back to Iraq to help stamp out the Islamic State. He was also seen as a more conciliatory leader than his predecessor, Nouri Al Maliki, who had been in power since 2006 with the blessing of both the U.S. and Iran. Maliki, also a Shi’ite, was largely blamed for alienating the Kurds and Sunni Arabs, which contributed to ISIS’s sweep across the country in 2014. If Abadi goes, the U.S. would be left with no other strong allies in Baghdad—and even less influence in Iraq.

But Iraqis aren’t just weary with their leader. With the burning of the Iranian consulate, it seems many Iraqis have had enough of Iranian influence in their country as well. Says Mansour: “Iraqis are certainly fed up with their leaders being more interested in pleasing external allies than making sure the water in Basra isn’t brown and contaminated.” 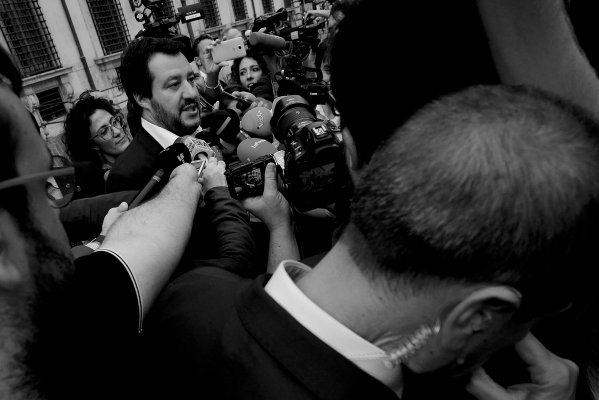 'We Want to Change Things from Within.' Italy's Matteo Salvini on His Goal to Reshape Europe
Next Up: Editor's Pick