On Thursday night, Rihanna closed out New York Fashion Week on a glamorous high note with her Fourth Annual Diamond Ball. Hosted by Insecure comedian Issa Rae and with performances from Grammy winner Childish Gambino and DJ Mustard, the charity event raised funds for Rihanna’s Clara Lionel Foundation — and proved a raucous party for celebrities like Seth Meyers, Odell Beckham Jr., Tiffany Haddish and Paris Hilton, who danced in designer duds at the bottom of Manhattan. (Also spotted: Twitter’s Jack Dorsey and Daily Show host Trevor Noah, and Rihanna, who stayed mostly out of the fray at a central table surrounded by family before getting up to dance.)

“We’ve got some good food, some music… and we’re working on making the world a little bit better, so you can feel less guilty about getting drunk,” Rihanna joked in her short notes to open the evening, which was kept phone-free for the first half to encourage guests to ostensibly skip the selfies.

“Rihanna, you are truly a good girl who went bad and then got good again,” Rae said during her monologue.

Inside the cavernous Cipriani Wall Street ballroom, about 650 guests sipped sparkling rosé in a space decked out with copious pink flowers before sitting down for a dinner of cheese tagliolini and short ribs.

The live auction was the main event, including items like Audi’s first electric car (the winning bidder will receive the first car off the assembly line — and bid a generous $120,000 for that pleasure; “They come equipped with seat belts,” hype man Meyers joked onstage to up the ante), an ultra-luxurious trip to Costa Rica for 20 that went for $260,000 and a set of rare bottles of Armand de Brignac champagne, with a trip to the wineries included in the price, for $35,000. Tiffany Haddish herself put down $75,000 for a pair of Chopard diamond earrings. Last year the Clara Lionel Foundation brought in about $5.5 million from this event, and director Justine Lucas told TIME they’re hoping to top that number with this year’s ball.

The Clara Lionel Foundation, named after Rihanna’s grandparents, pursues a number of charitable projects worldwide, often focusing on health and education. But that mandate has recently expanded. In the past year, Lucas said, they’ve provided emergency response support following crises in places like Texas, Puerto Rico and Mexico, and in the next year they will be raising funds for a $25 million campaign to improve preparedness and resilience projects. “[Rihanna’s] incredibly involved with the philanthropic work,” Lucas said.

“We became increasingly frustrated with this model we’re stuck in where we’re just reactionary to natural disasters for the four weeks afterward and we walk way,” Lucas explained to TIME. “We don’t think of natural disasters as something that’s going to continue to occur with increasing frequency because of climate change, and what that means is that there’s vulnerable communities that are bracing just to get hit.”

The CEO of Global Citizen, Hugh Evans, was recognized for his work during the evening, receiving the 2018 Diamond Ball Award. “We need to change the systems that keep people poor,” he said, noting that Global Citizen — which hosts an annual festival in Central Park — has been able to secure financial commitments “in excess of $37 billion to end extreme poverty” over its lifetime.

But the real highlight was Donald Glover, who performed a set as Childish Gambino from a central stage with a full backing band; as an introduction, Rihanna called him “one of the most talented guys I’ve ever met.” (And during the show, Tiffany Haddish briefly interrupted the action to shout out to the keyboard player, who was an old roommate of hers.) From hits like “This Is America” to “Redbone,” a shirtless Glover made sure to bring the heat before partiers dispersed to, of course, the after party at a downtown night club.

Seth Meyers said it best: “I am here because I like being in the same room as Rihanna,” he joked. “It doesn’t happen all the time.” He admitted he was, like everyone else, in love with the star — and only allowed to attend the event because his wife was similarly infatuated. “It’s important in marriages to have something in common,” he said. Stars on the red carpet were equally effusive. “I love Rihanna, she’s iconic and beautiful inside and out,” Paris Hilton told TIME. Added singer Normani: “She’s been such an advocate for education and health, and it’s been amazing to see.” 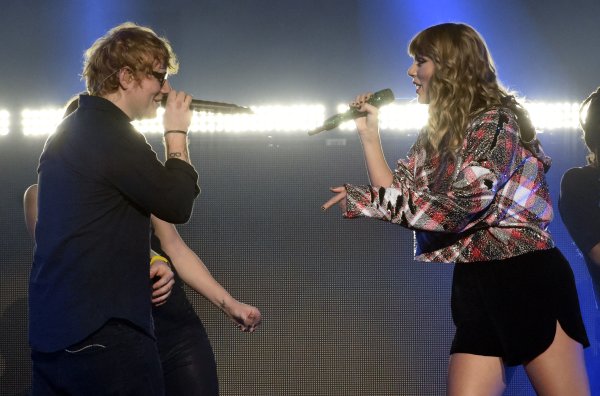 Taylor Swift Poked Fun at Ed Sheeran on a Nature Hike
Next Up: Editor's Pick