The Palestinian flag flies from the building housing the General Delegation of the Palestine Liberation Organization (PLO) in Washington on January 18, 2011.
Nicholas Kamm—AFP/Getty Images
Ideas
By Ghaith al-Omari
Al-Omari is a senior fellow at The Washington Institute for Near East Policy focusing on the U.S.-Israel Strategic Relationship. He is the former executive director of the American Task Force on Palestine and served as adviser to the negotiating team during the 1999–2001 permanent-status talks.

The Trump Administration announced plans Monday to close the Palestine Liberation Organization (PLO) mission in Washington D.C., sparking visceral reactions from Palestinian officials. The mission, which serves as a de facto embassy Palestinian embassy, has been given a month to pack up. The move was described by PLO Executive Committee Member Hanan Ashrawi as “crude and vicious blackmail” while the head of the PLO Delegation to the United States, Ambassador Husam Zomlot, called it part of an “ongoing campaign to liquidate our [Palestinian] rights and cause.”

The intensity of the Palestinian reactions cannot be explained purely by Monday’s announcement. After all, the PLO mission in Washington was regularly bypassed by senior Palestinian leaders in Ramallah who preferred to directly engage with U.S. officials—whether in terms of bilateral U.S.-Palestinian relations or regarding matters relating to the peace process.

But the move is particularly symbolic. And with an escalatory dynamic and heated tensions defining Palestinian-U.S. relations in recent months, the mission’s closure has now become a major flashpoint.

The establishment of a PLO mission in Washington in 1994 was a seminal moment. The PLO had understood since the 1970s that despite overwhelming international sympathy, any progress towards creating a Palestinian state would require engagement with the U.S.; since then it had repeatedly sought to establish such relations.

The euphoria that followed the signing of the Oslo Accords 25 years ago made achieving this goal possible. For leaders like Palestinian President Mahmoud Abbas, this was proof the PLO was universally recognized as the uncontested representative of the Palestinian people, and that the Palestinian issue was on its way toward resolution with American support. When Hamas forcibly took control of Gaza in 2007, leaving the Palestinian Authority (PA) only in control of parts of the West Bank, the PA’s relations with the U.S. proved essential both of ensuring that the international community isolated Hamas and continued to diplomatically and financially support the PA.

In 1997, as the peace process began to flounder, the operation of the PLO office came under increasing limitations that could only be bypassed if the president issued a waiver and certified that operation of the office “is important to the national security of the United States.” But these waivers were always readily signed by successive U.S. presidents—even when Palestinian-American relations were strained.

It’s easy to forget now, but Palestinian relations with President Donald Trump actually started on a high note. Trump welcomed Abbas at the White House on May 3, 2017 and hailed “positive ongoing partnership between the United States and the Palestinians.” Abbas returned the compliment a few weeks later when he hosted Trump in Bethlehem, calling him a “dear friend” and “a great guest of our people.”

Soon after that, however, tensions began to rise. The Palestinians were alarmed when the U.S. started exploring the possibility of convincing Arab states to establish relations with Israel prior to peace being reached between the Palestinians and Israelis. The U.S. wanted to create additional incentives for Israel and to widen the stakeholders in a peace process. The Palestinians, traditionally wary of Arab attempts to co-opt their issue, saw this as an attempt to marginalize them. That would become a persistent theme in their relations with the Trump Administration.

The rapid collapse of Palestinian-U.S. relations, however, happened on December 6 2017 when the U.S. decided to recognize Jerusalem as the capital of Israel and to move its embassy to the contested city. The following months saw a number of U.S. measures that sparked the ire of the Palestinians, including cutting U.S. aid to the Palestinians and to UNRWA, the U.N. agency tasked with providing for Palestinian refugees.

U.S. officials maintain that steps such as those relating to Jerusalem constitute a recognition of the reality that Israel considers Jerusalem as its capital and is unlikely to change that position. They argue that taking these thorny issues “off the table”—as Trump phrased it—simplifies the quest for peace. In their view, withholding aid and shuttering the PLO office are tools to pressure the Palestinians to “come back to the table.”

Palestinians see things differently. They see American steps regarding Jerusalem and UNRWA as an attempt to prejudge the outcome of peace negotiations in a way that denies them their rights, and regard withholding aid as “blackmail.” As such, Abbas decided to sever all contact with U.S. officials in December 2017 shortly after the US recognition of Jerusalem as Israel’s capital, announced his refusal to engage with any peace plan presented by the Trump Administration and embarked on a vigorous regional and international diplomatic campaign to counter these U.S. measures.

Another issue that has deepened the mistrust is Gaza. Controlled since 2007 by Hamas, the PLO’s bitter rival, the impoverished coastal strip has long been facing a dire humanitarian situation, with unemployment reaching 44%, and electricity only available for as little as four hours a day. Starting in March 2018, the security situation began to deteriorate and by the summer threatened to transform into yet another open conflict between Hamas and Israel. Abbas had contributed to the deepening crisis by imposing some financial sanctions against the Strip and refusing to cooperate with Egyptian and U.N. proposals to alleviate the humanitarian situation. The U.S. was frustrated with Abbas’ inflexibility and supported Egyptian and U.N. attempts to directly broker a truce between Israel and Hamas. Abbas saw this as yet another American attempt to marginalize him and the PLO.

After all this, Monday’s decision to close the PLO office in Washington has come to encapsulate the essence of the rising hostility between the U.S. and the Palestinians. The U.S. sees the move as a legitimate tool of pressure against an intransigent PLO, while the PLO sees it as proof that the US is intent on marginalizing it and denying Palestinians’ legitimate representation.

Yet both sides may have hit a dead end. With the closure of the PLO office, the U.S. may well have exhausted the diplomatic and financial pressure tools at its disposal. And while the Palestinians may have so far withstood American pressure, they are back in a situation similar to the pre-Oslo days: despite enjoying the support of many in the international community, they are unable to advance their cause because of the lack of U.S. support.

This new reality could end the already eroding Palestinian support for a diplomatic solution to the conflict. And to the detriment of Palestinians and Israelis alike, it could also usher the rise of extremist elements like Hamas. 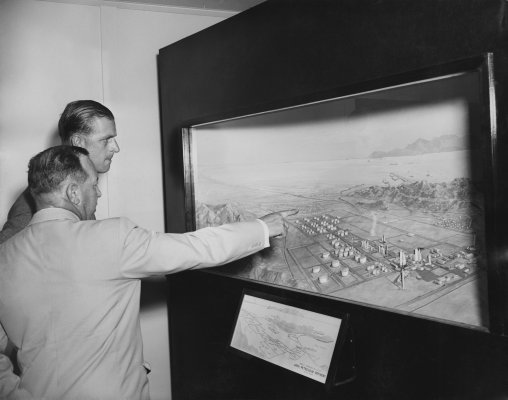 How a Forgotten Rivalry Between Superpowers Helped Shape the Modern Middle East
Next Up: Editor's Pick