Allies Are Doubting How Long President Trump Will Stay in Power. Here's How to Stop Irreversible Damage

The continuing melt-down in Washington, D.C., has profound and challenging domestic implications. But far more dangerously, the obvious chaos throughout the Executive branch — emanating from the President himself — is weakening our allies’ faith in America’s ability to lead.

The thinking of the President, recently immortalized as “crazy town” in a quote ascribed to White House Chief of Staff John Kelly in Bob Woodward’s meticulously researched new book, Fear, is at present a mystery to the world at large. The release of that book and the near-simultaneous appearance of an anonymous op-ed by a “senior official in the Trump Administration” in the New York Times, which described a serious “resistance” in the Administration, have perplexed our allies, partners and friends — and emboldened our opponents. Disparaging comments about the President attributed to Secretary of Defense James Mattis and Chief of Staff John Kelly are stunning — and despite their denials, the comments appear well-sourced and of a kind with those attributed to former Secretary of State Rex Tillerson.

All of this creates the impression abroad of an executive branch in near freefall. One observer with deep diplomatic and intelligence experience in Washington said to me recently, “I’ve heard of rats departing a sinking ship, but I’ve never seen them drilling holes themselves in the hull.” Over several trips to Asia over the past four months, I was repeatedly asked if our President would serve his entire term and often — with an embarrassed half-smile — if he was “stable.”

In all of the years I have spent as a senior policy maker, and more recently as the Dean of a widely known graduate school of international relations, I have never seen our prestige as a nation at such a nadir. It will take all the best efforts of the President’s international team, as well as the rest of us in contact with global interlocutors, to provide reassurance and ask for patience to our network of allies, partners and friends — and to prevent irreversible damage.

At the center of the concern, of course, is President Donald Trump. In two years as the “leader of the free world,” an increasingly ironic phrase, Trump has managed to personally alienate virtually every key U.S. ally. He has been dismissive and disdainful of major NATO leaders. In the Pacific, U.S. policy has been uneven, beginning with the mistaken withdrawal from the Trans-Pacific Partnership, which would have constructed the largest free-trade zone in history and excluded our key competitor, China. The Middle East has been a relative bright spot for the Administration, and it is popular in both Israel and Saudi Arabia (and in the Gulf broadly) for its tough stance on Iran. But even here, partners are beginning to worry about the President’s domestic woes and longevity.

This makes the November mid-terms a critical metric for foreign observers. A big reversal in the House of Representatives will further undermine the President’s credibility abroad and may magnify the Watergate-like parallels. Foreign leaders will be even less likely to believe the Administration has the longevity and credibility to lead global policy initiatives — from Syria to Iran to North Korea. While some international leaders would view the house flipping as “democracy working,” on balance they would see it as a storm warning of more chaotic behavior ahead. More revelations are likely, as more aides depart and seek to salvage their reputations by heaping opprobrium on the President and those remaining behind. This unvirtuous cycle will damage America’s reputation further in the eyes of the world.

Senior officials must do all they can to reassure our allies — and convince our opponents — that the U.S. is steady, in control and capable. This will require much personal contact with counterparts at every political level, from the Vice President through the Cabinet — including senior generals, who should execute exercises that emphasize interoperability and solidarity.

The message should be that, despite the frantic tweets and roiling waters of “crazy town,” the U.S.’s policy actions have remained relatively consistent. We are still attacking the Islamic State aggressively, still confronting China in the South China Sea, still supporting Taiwan and South Korea in Asia, still working closely with Colombia as their peace process unfolds and still deploying troops to the Arabian Gulf in support of Saudi Arabia and the Gulf States, among further examples. Directing skeptics back to the National Security Strategy from 2017, a fairly clear and indeed traditional statement of U.S. policy, will be helpful.

But in the end, such damage control can only help to a point. The top government leaders below the President know what needs to be done to keep the country safe. The question is whether Trump will allow them to bring order, at least in foreign policy, to the chaos coming from the Oval Office. 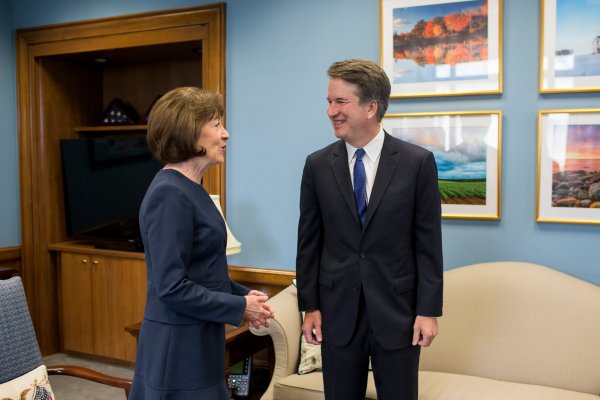 Activists Raise $1 Million to Pressure Collins to Oppose Kavanaugh
Next Up: Editor's Pick