Why Hurricane Florence Is So Dangerous

The National Hurricane Center says Hurricane Florence – with winds of up to 140 mph – is expected to be “extremely dangerous” when it hits the East Coast early Friday. But, it’s the water, not the wind, that has the potential to make the storm so deadly, experts say.

A storm as big as Hurricane Florence will hit with a “one-two punch” deluge of water, Erik Salna, the associate director of the International Hurricane Research Center at Florida International University, says.

First comes the storm surge – a rise in sea levels caused by storm winds. Then come the torrents of rain.

Hurricane Florence is currently a massive Category 4 hurricane. It’s gaining strength and could even be upgraded to Category 5 before it makes landfall early Friday, according to forecasts.

North Carolina Governor Roy Cooper urged residents not to underestimate the storm. “The waves and the wind this storm may bring is nothing like you’ve ever seen,” he said. “Even if you’ve ridden out storms before, this one is different. Don’t bet your life on riding out a monster.”

According to a 2014 study from the American Meteorological Society, storm surge and rain are the cause of 76% of direct deaths from hurricanes. The study found that from 1963 to 2012 90% of deaths occurred in water related incidents, mostly drowning.

Most of the deaths from hurricanes in recent years have come from people who stay put and get caught in the ensuing floods, retired Coast Guard Capt. Thomas Lennon tells TIME. Lennon, the chair of the Emergency Management and Homeland Security Department at Massachusetts Maritime Academy, says the biggest mistake during Hurricane Katrina – which claimed 1,833 lives – was that officials only ordered evacuations 24 hours before it hit New Orleans in 2005, and by then it was too late.

“The bottom line if you wait, it’s too late,” he said. “If you have to make large scale evacuations, make the call early. The term mandatory evacuation rings hollow because there’s no good way to actually enforce it but if you call it something else people are not going to follow.”

The National Hurricane Center says storm surge from Hurricane Florence could be up to 13 feet in some areas of North Carolina. Salna predicts it could rise as high as 15 feet.

“It’s possible it could be even higher than that depending on how quickly the storm moves to the coast, but we’re kind of expecting it to slow down as it moves to the coast and would probably cut down the storm surge,” AccuWeather hurricane expert Dan Kottlowski says. “Nonetheless, there still would be a very life threatening storm surge of somewhere around 10 to 15 feet.”

After the storm surge comes the deluge of rain. Up to 40 inches could fall in some areas in a short period of time. Up to 15-25 inches is expected in many areas where Hurricane Florence hits. The National Hurricane Center says such massive rainfall could produce “catastrophic flash flooding and significant river flooding.”

“Florence is going to drop tremendous amount of rain, not as much as [Hurricane] Harvey brought to Texas but there will almost definitely be flooding,” Salna says.

The flooding will depend whether Florence slows down and lingers over coastal areas as it moves inland, Salna says. If this happens, the result will be heavy rains that cause serious damage. 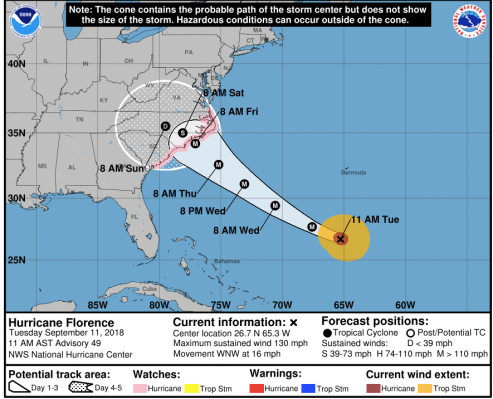 Hurricane Florence Will Destroy Infrastructure and Could Knock Out Power for Weeks, FEMA Warns
Next Up: Editor's Pick