In this image taken by Astronaut Ricky Arnold, Hurricane Florence gains strength in the Atlantic Ocean as it moves west, seen from the International Space Station on September 10, 2018.
NASA – Getty Images
By Ciara Nugent

Astronaut Ricky Arnold captured the massive Hurricane Florence from aboard the International Space Station this week as it rapidly strengthens on its way to the U.S. east coast.

Preparations for Florence are well underway on the East Coast, with more than 1 million ordered to evacuate. The Category four hurricane is expected to hit the mainland on Thursday night into Friday morning, according to the National Hurricane Center.

Hurricane Florence’s center is currently about 950 miles east-southeast of Cape Fear in North Carolina and about 405 miles south of Bermuda. The storm is producing sustained winds of 130 mph. The storm could further strengthen into a category five before it makes landfall on the east coast.

The NHC has issued a hurricane watch for the area between Edisto Beach in South Carolina and the North Carolina-Virginia border, including the Albermarle and Pamlico Sounds in North Carolina. 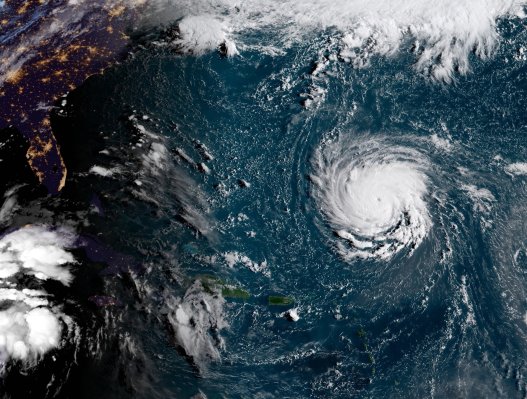 What to Know About Hurricane Florence If You're Traveling This Week
Next Up: Editor's Pick