An Australian newspaper has come under criticism after publishing a cartoon illustrating Serena Williams’ outburst at the U.S. Open that readers have compared to Jim Crow-era imagery.

Melbourne-based tabloid The Herald Sun published a drawing by editorial cartoonist Mark Knight depicting Williams throwing a fit on the court and destroying her racquet after the 23-time grand slam champion lost in the final match of the U.S. open to Naomi Osaka.

In the background, umpire Carlos Ramos asks Osaka, “Can you just let her win?”

But the illustration has drawn fierce criticism from a range of high-profile figures who say it bears strong similarities to the infamous Sambo cartoons and other racist images and characters of the Jim Crow period in the U.S.

Knight told the Australian Broadcasting Corporation that he had “no knowledge of those cartoons or that period” and that people were “making stuff up.”

The Sun, which is owned by a subsidiary of Rupert Murdoch’s News Corp., stood by Knight in an op-ed that said “the world has officially gone mad” with political correctness.

Editor Damon Johnston also defended Knight in a tweet saying the cartoon is “not racist or sexist” but “rightly mocks poor behavior by a tennis legend.”

“I’m upset that people are offended, but I’m not going to take the cartoon down,” Knight said, according to the Guardian. “I can’t undraw the cartoon. I think people have just misinterpreted. Maybe there’s a different understanding of cartooning in Australia to America… It was a cartoon based on her tantrum on the day and that’s all it was.”

But Knight’s critics, which included Martin Luther King’s daughter Bernice King, say the Sun‘s defense of Knight is “uncomfortable” and “without consideration for the painful historical context of such imagery and how it can support biases and racism today,” she said. “Why wouldn’t a human being care about that?”

“The Sept 10 cartoon not only exudes racist, sexist caricatures of both women, but Williams’ depiction is unnecessarily sambo-like,” echoed the National Association of Black Journalists, which described the drawing as “repugnant.”

The executive chairman of News Corp. Australia, Michael Miller, said criticism of Knight, “shows the world has gone too PC.”

J.K. Rowling also weighed in., saying the drawing “reduced” one of the greatest sportswomen alive to “racist and sexist tropes.”

It’s not the first time Knight has come under fire over what some readers saw as a racially insensitive illustration. In early August, the Sun was criticized for publishing a cartoon showing what appeared to be African youths wreaking havoc in a subway station. 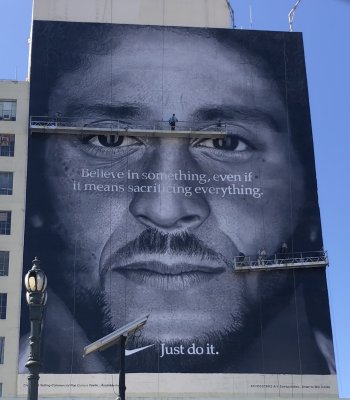