Syrian Civil Defence volunteers, also known as the White Helmets, evacuate a victim from a building following an air strike on the village of Maaret al-Numan, in the country's northern province of Idlib, on Dec. 4, 2016.
Mohamed Al-Bakour—AFP/Getty Images
By W.J. Hennigan

“We’ve tried to convey the message in recent days that if there’s a third use of chemical weapons, the response will be much stronger,” Bolton said in a speech on Monday in Washington. “I can say we’ve been in consultations with the British and the French who have joined us in the second strike and they also agree that another use of chemical weapons will result in a much stronger response.”

Syrian forces, backed by Russia and Iran, have been massing for weeks around Idlib’s borders where the last bastion of Islamist-dominated rebel groups is seeking refuge and posing the final obstacle for Assad to declare victory. For years, as the government retook areas like Aleppo and eastern Ghouta, Syria’s defeated rebels have fled to the northern province, which was established as a “de-escalation zone” guaranteed by Turkey, Russia and Iran.

In recent days, the U.S. government has received intelligence that the Syrian government intends to use chlorine weapons in the siege of Idlib, American officials say. Should an attack take place, Pentagon planners have drawn up a list of possible U.S. military responses. There is consensus within the Administration that, even in a conflict that has killed some 400,000 people, any Syrian use of forbidden chemical weapons must be punished.

The Trump Administration has calculated that Assad’s defiance risks a domino effect around the globe.

Assad has repeatedly denied the use of chemical weapons. The Russian and Syrian governments claim that the rebels — not Assad — plan to launch a chemical weapons attack. On Monday, Bolton called that statement “one of the most outrageous claims that I can think of” in the history of government-issued propaganda.

The United Nations has accused the Syrian government of launching more than two dozen attacks with chlorine, as well as the deadly nerve agent sarin, since the civil war began in 2011 — even though chemical weapons have been internationally banned after widespread use in World War I.

The use of chemical weapons in Idlib could further complicate Syria’s already complex, blood-soaked civil war. The Americans, Russians, Iranians, Turks, Israelis and more have all been involved in Syria’s conflict to varying degrees, turning it into a proxy battleground for various global interests.

The German Defense Ministry is reportedly considering joining possible airstrikes by U.S., British and French forces against Syrian targets, if another chemical attack is launched, according to the German newspaper Bild.

The United Nations and human-rights groups have pleaded against any military offensive in fear of unprecedented bloodshed. There are more than 2 million people, including some 70,000 fighters belonging to more than a dozen rebel factions. “Our top line message is there needs to be ways of dealing with this problem that don’t turn the next few months in Idlib into the worst humanitarian catastrophe, with the biggest loss of life of the 21st century,” UN Undersecretary-General for Humanitarian Affairs Mark Lowcock told reporters in Geneva.

The Trump Administration has already twice responded to Assad’s chemical attacks with military force. Trump ordered an attack April 2017 against the Shayrat air base after a warplane at the base dropped bombs on another town allegedly containing the nerve agent sarin. U.S. warships launched 59 Tomahawk cruise missiles at the base.

But Assad was not deterred from continuing to use chemical weapons that were supposed to have been removed from Syria in a 2013 deal brokered by President Obama to prevent further attacks. Russia was the framework guarantor of removing all the chemical weapons, but apparently did not live up to the deal.

On April 13, U.S. bomber jets, warships, and an attack submarine launched strikes along with French and British fighter jets in a more sweeping attack. The U.S. military said the main targets of the strikes were two storage facilities, one that produced sarin, and another was part of a command post, which were located west of the city of Homs. The third target was the Barzah Research Center, a military facility located near Damascus that conducted research, development, production and testing of chemical and biological warfare technology.

Now, the use of chemical weapons is a “red line” that, if crossed, will trigger U.S. and European military response. Still, it remains unclear what precisely would prompt a new round of airstrikes, whether a chlorine gas attack or one that uses a deadly nerve agent, like sarin. The Administration has been deliberately vague on the topic.

“President Bashar al-Assad of Syria must not recklessly attack Idlib Province,” Trump wrote September 3 on Twitter. “The Russians and Iranians would be making a grave humanitarian mistake to take part in this potential human tragedy. Hundreds of thousands of people could be killed. Don’t let that happen!”

Russian warplanes began launching airstrikes in western Idlib, shortly after the tweet was published. Meanwhile, the Syrian government began a new round of artillery and rocket shelling in southern Idlib, and adjoining northern Hama Province, according to the Syrian Observatory for Human Rights, a monitoring group.

Syrian ground forces, however, remain on the outskirts of the province, awaiting orders to invade. 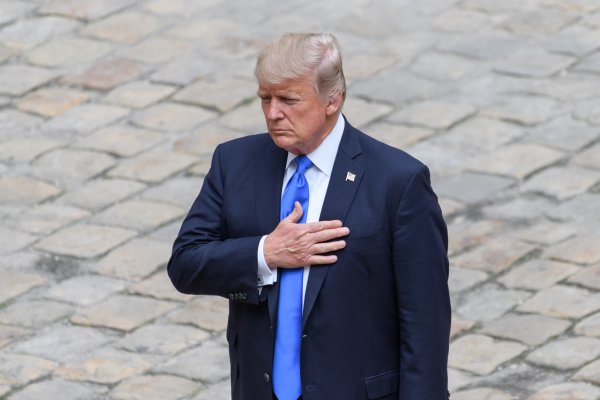 American Legion Comes Out Against Military Parade - As Long As U.S. Troops Are Still Fighting Overseas
Next Up: Editor's Pick