The Next Big Thing for Tech: The Internet of Everything

In a column I wrote here before CES, I outlined eight trends I suggested would come out of the show. I omitted a key trend known as the Internet of Everything (IOE), as it was implied throughout out most of the trends I listed. But now that I have digested the events of the show, I should have called it out as a trend in its own right because it ultimately became the true theme of this year’s CES.

This became very clear to me during a meeting I had with the CEO of Cisco, John Chambers, where he outlined Cisco’s thinking on IOE. The financial numbers he predicts for the impact of IOE in the public sector alone: $4.6 trillion. He believes it will have a dramatic impact on everything from city planning, first responders, military, health and dozens of other environments. When I hear numbers this big, I become skeptical. We’re talking about trillions of dollars here, not billions. However, when you look at the ultimate idea of what IOE is, these numbers could be on the mark.

The Internet of Everything has become a catch-all phrase to describe adding connectivity and intelligence to just about every device in order to give them special functions. At the show, for instance, there was an Internet-connected crock pot. You could control when it comes on and adjust its settings from the other side of the world. There were also various car vendors who introduced the next generation of connected automobiles. All of them referred to their cars as being part of IOE. Smart cars, smart appliances, smartwatches and more all end up with the “smart” moniker in front of them when they become tied to the Internet and interconnect to ecosystems of devices, software and services. The company behind the Sleep Number beds even announced a smart bed that monitors sleep patterns with 500 sensors built into the mattress, sending the results to an app on your smartphone or tablet.

As I walked the CES show floor, which by the way had 2 million square feet of exhibit space, it was hard to find a product that didn’t have some form of connectivity.This was especially true in the health section, where about 60 booths showed off health-related wearables that monitored steps taken, heart rate, calories burned and blood pressure. There were even personal EKG systems. I was wearing the Fitbit Force wrist band and found that I walked in excess of 20,000 steps each day I was at the show. When I checked out the various cars on the show floor, all were showing off how smart and connected they were. There were connected TVs, refrigerators, appliances, home automation systems; you name it, and it was connected in some way or another to the Internet or to a smartphone, tablet or PC.

The IOE focus on health is quite interesting and I consider very important. In the health section at CES, United Healthcare, which is one of the largest health care insurers in the U.S., had a large booth that highlighted various health monitoring devices and online educational services. Healthcare providers and insurers know that keeping you healthy and out of the hospital is much cheaper and better than taking care of the costs for you if you get sick — and especially if you’re admitted to a hospital. So they are very much behind IOE, suggesting that people use things like the Jawbone Up, Misfit Shine, Nike Fuelband, Fibit Force and dozens of other health devices used to motivate you and monitor your exercise. Some of these devices, such as connected blood pressure kits and connected blood glucose testing kits can even send the data they collect to your healthcare provider so that he or she can monitor your progress. As a type-2 diabetic, I was especially interested in a product from Dexcom: a continuous blood glucose monitoring system that uses a subcutaneous sensor inserted into the arm, belly or thigh and wirelessly communicates with a handheld digital monitoring device. This monitor then slides into an Internet connected docking system and can send an entire 24-hour or even a 10-day reading to your healthcare provider so he or she can see how you are doing with your meds and make adjustments in real time.

Connected cars will be the big differentiators for the auto industry in the near future. AT&T announced a major platform that can be used by car makers to add 4G connectivity and services to their vehicles. And last fall, AT&T introduced a foundry that will serve as a source for automakers to make their cars smarter. At CES, AT&T announced that Audi and GM would be using AT&T’s 4G solutions, and in a surprise move said that GM would move its OnStar services from Verizon to AT&T soon.

Intel, Nvidia, Qualcomm and most of the semiconductor companies at the show all announced new processors and services aimed at IOE with Intel announcing its Quartz chip for wearables and a new SOC (system on a chip) called Edison, which is the size of an SD card and provides a complete computer system for use in all types of IOE devices. I see Qualcomm as being one of the really big players and winners in IOE since the company has been championing IOE for the past two years and attacks IOE at two levels. Its mobile chips and radios are used in millions of smartphones and tablets now, and the company has also been pushing something it calls the Digital Sixth Sense, which relates to another important part of IOE: sensors. Qualcomm’s sensors are called Gimbal processors.

Billions of sensors will be shipped each year. These sensors give devices like lights, beacons, appliances and home automation systems a connection to other devices and Internet ecosystems. Market researcher IDC projects that by 2020, 220 billion connected devices will be in use. Qualcomm can deliver these sensors in dedicated products such as beacons and home automation systems, but they can also be added to the company’s Snapdragon mobile processors that power phones and tablets.

Although we have been talking about connected devices since the mid ’90s, I think we will look back at this year’s CES and realize it as the event where IOE finally hit the mainstream. Over the next three to five years, all companies will create products and services that fit into a world of smarter devices, services and ecosystems. While there will surely be some variants on this theme, the bottom line is that the Internet of Everything is the next big thing for tech and pretty much all industries, as they’ll all want to be part of this revolution.

One last note on IOE: What I share here is simply the trend. All industries will still have to deal with issues like security, privacy, hardware compatibility, software compatibility, synchronization, wired infrastructure, wireless infrastructure, data mining, data analysis and dozens of other things that will make IOE really work all over the world. While IOE is the next big trend, the next step will be to work on these major issues if IOE is to meet its full potential.

Bajarin is the president of Creative Strategies Inc., a technology industry analysis and market-intelligence firm in Silicon Valley. He contributes to Big Picture, an opinion column that appears every Monday on TIME Tech. 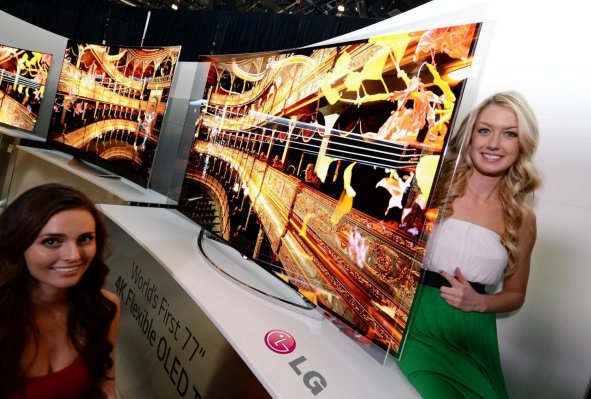 TVs That You Can Bend
Next Up: Editor's Pick