What to Know About Sweden's 2018 Elections

Rich, happy, stable, perhaps a little dull. Our utopian image of Sweden, with the world’s third highest standard of living and a famous welfare state, seems impervious to the kinds of dramatic political cleavages and populist insurgents that have swept the U.S. and much of Europe in recent years. But at parliamentary elections on Sunday, the far-right is likely to be a major player. Here’s what to know.

When are Sweden’s elections?

Voting takes place on Sunday, September 9 for the 349 members of the Riksdag, Sweden’s legislative chamber. Results are due in early on Monday.

Who are the main parties?

Around a fifth of Swedes are expected to vote for the Sweden Democrats, a populist anti-immigrant party with neo-Nazi roots led by 39-year-old Jimmie Åkesson.

Meanwhile, Prime Minister Stefan Löfven’s center-left Social Democrats, one of the last avowedly social democratic parties in power in Europe, are likely to get their lowest vote share in over a century. They have come first in every election since 1917 and are expected to take 26 percent of the vote.

The Moderates, a center-right party that has governed Sweden a handful of times, wants to form a coalition with other parties from the right, called the Alliance. But their support has dwindled from 23 percent at the last elections in 2014 to around 17 percent according to recent polls. They are expected to lose votes to Sweden Democrats.

What do the parties agree on? What are they fighting over?

In the years following World War II, the Social Democrats were the main architect of Sweden’s welfare state. In exchange for some of the highest income tax rates in the world, Swedes get heavily subsidized healthcare and education, public pensions, and generous periods of parental leave. Löfven continues to preach an idea of Sweden as one big family that looks after all its members, telling a recent rally, “When you and I are at our weakest as individuals, then our society should be at its strongest.”

Today, the welfare system is a fundamental part of Swedish public life and over time has gained the support of all major political parties on both the left and right. Meanwhile, a strong economic model that balances free trade with a commitment to running budget surpluses meant Sweden sailed through the economic crisis of 2008 largely unscathed, without needing to impose austerity measures.

Nevertheless, the country’s broad safety net is now being used in arguments against the Social Democrats—albeit by a party that, unlike the far-right in other countries, supports social welfare policies. “The Sweden Democrats say that people who have lived and worked in Sweden all their lives and paid their taxes deserve good treatment when they get old,” says Michele Micheletti, a professor of Political Science at Stockholm University. “But then they say, ‘How can we do that for you if we accept all these other people?’ They want you to see it as a trade-off: it’s us or them.” The “them” are Sweden’s 18.5% foreign born population, most of whom arrived in the last few years.

What role does immigration play in Sweden’s elections?

In 2015, at the peak of Europe’s migrant crisis, 163,000 asylum seekers arrived in Sweden. With a population of just 9.7 million, that meant Sweden accepted more migrants per head than any other country in the E.U. Nevertheless, Sweden’s economy remains strong, and unemployment is low at 5.9%. But many have argued that Sweden’s rigid labor market and a skills gap between migrants and the existing population has made it difficult to absorb people fast enough.

“Almost all the political parties have become tougher on migration since 2015,” says Micheletti, pointing out that the numbers entering after 2015 fell dramatically, with only 27,000 people granted asylum in Sweden in 2017. “But no one has managed to make it an issue like the Sweden Democrats.”

As well as highlighting the pressure migrants could put on public services, Åkesson’s party has blamed migrants for a 15-year spike in violent crime in Sweden in 2017– though the number of murders in the country in 2017 was still only 117. Sexual offenses are also on the rise. There is no clear explanation for the increase, but a growing phenomenon of gang violence is often cited.

Are there other reasons for the rise of the far-right?

Though concern around immigration is the most obvious driver of the Sweden Democrats’ surge—polling suggests their popularity has almost doubled since the 2014 elections, when they won 12% of the vote—it’s only one factor.

“The party has become a lot better at campaigning and a lot more articulate,” says Matthew Goodwin, a Professor of Politics at the University of Kent in the U.K. and co-author of the book National Populism: The Revolt Against Liberal Democracy. Founded in 1988 as the successor to parties with white supremacist and fascist leanings, the Sweden Democrats languished for years on the fringes of national politics, scoring around 3% in elections.

But after he was elected leader in 2005 at the age of 25, Åkesson began rebranding. In 2006, he dropped the party’s old symbol, a flaming torch emblazoned in the Swedish flag, adopting in its place an anodyne blue flower, and limited references to its predecessor movement Keep Sweden Swedish. While still making use of xenophobic rhetoric— in 2009 he called Islam “our greatest foreign threat since the Second World War”—he adopted a “zero tolerance” policy on racism and began expelling members with more extreme views. In 2010, the Sweden Democrats won their first seats in parliament with 6.9% of the vote.

What’s driving the fall of the center-left party?

As Åkesson’s party was growing stronger, Löfven’s was suddenly weakening. From 1914 to 2006, the Social Democrats’ vote share never fell below 35%, often reaching nearly 50%.

Historically, working class voters have been “very strongly aligned” with the Social Democrats, Goodwin says, thanks to their support for support for labor rights and social welfare. He argues the party’s downfall mirrors the problem of social democratic parties all over the world. “In the late 1990’s, they made a calculation that they could focus on the middle class and social liberals—people you’d call the “winners” of globalization” —and that the working class had nowhere else to go,” he says. “That calculation has turned out to be fundamentally incorrect.”

In Sweden, where the welfare state has become a given, the Social Democrats have lost their most compelling platform. Rising inequality and stagnant wages, alongside the concerns about law and order, have left voters dissatisfied with the establishment. Despite pledges to increase spending on education and healthcare, the Social Democrats are likely to lose votes to their more radical neighbours, the Left Party. Running on a promise to rein in the gig economy and increase taxes for the richest in society, they are aiming to double their vote share to around 10%.

What’s likely to happen on Sunday?

Though outcome of Sunday’s vote is uncertain, the Social Democrats will likely remain the largest party, with the Sweden Democrats pushing the Moderates into third place. Sweden is used to coalition or minority governments, and the Sweden Democrats are likely to be in the position of kingmaker. But all the main parties have pledged not to join with them.”It’s looking like it will take a long time to form a government,” says Micheletti.

Whatever the outcome of Sunday’s vote, Goodwin says the Sweden Democrats are here to stay. “People tend to think of parties like the Sweden Democrats as kind of protest movements, that will go away eventually,” he says. “But national populism in Europe has been a long time coming and it’s going to be permanent force on the political landscape. This is a historic shift.” 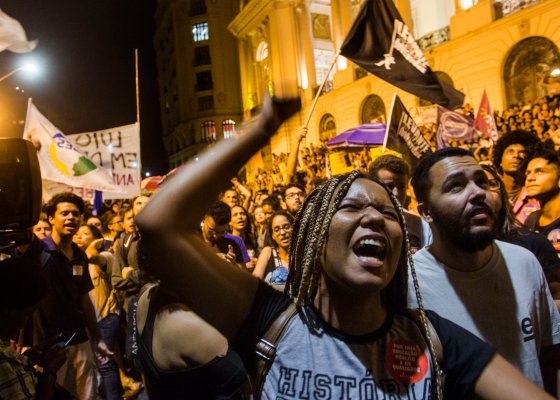 5 Emerging Markets Bracing for a Tough Fall
Next Up: Editor's Pick