A Dutch Teenager Had a Dream to Clean Up the World's Oceans. 7 Years On, It's Coming True

For someone who gets violently seasick, Boyan Slat spends a lot of time thinking about the ocean. The Dutch inventor has designed the world’s first ocean plastic cleanup system but admits he won’t be on the ship with it when it launches out of San Francisco on Saturday. “I am not a man of the sea,” he says.

After five and a half years of hard work, the 23-year-old Slat will watch from dry land as System 001 — a floating barrier nearly 2,000ft long — snakes its way out under the Golden Gate Bridge into the Pacific. Its destination is the Great Pacific Garbage Patch, a gyre of plastic waste twice the size of Texas held in position by ocean currents between California and Hawaii.

If all goes to plan, Slat says, an array of 60 systems could reduce the amount of plastic there by half by 2025. “I hope that this will be a turning point for the plastic pollution problem,” Slat tells TIME in a phone interview a few days before the launch, in between final preparations. “For sixty years it has only gotten worse and worse. Now hopefully we’re turning the tide.”

The eradication of the garbage patch, and more broadly the salvation of our oceans, has been Slat’s single-minded goal ever since he was 16 years old, when a diving trip to Greece yielded more plastic bag sightings than fish. Struck by the idea for a floating barrier that could collect plastic using the power of ocean currents alone, he founded his company, The Ocean Cleanup, aged just 18.

The idea grabbed imaginations around the world. In 2015, an early prototype of System 001 was featured on TIME’s list of the best inventions of 2015. The project has come a long way since then, Slat says. “It takes a trained eye to see the similarities.”

What was originally envisaged as a large rigid barrier arranged around a central tank for collecting plastic, is today an unmanned, modular system that moves with the currents, naturally gravitating to areas of higher concentration. From the air it looks like a pipeline sitting on the surface of the sea, but beneath the waves lies a 10ft deep ‘skirt,’ which traps plastic accumulated by the current.

Because the system is solid rather than a net, Slat says sea life will be protected from becoming ensnared. The hope is that plastic will accumulate as if on a seashore, ready to be collected by boats and taken for recycling.

It’s an ambitious plan, and one that has received millions of dollars of funding thanks to fast-shifting public opinion on plastic. In December 2017, 193 countries signed a U.N. resolution to eliminate ocean plastic pollution, and big corporations like McDonald’s are moving to remove single-use plastics from their stores. (Some say not fast enough.) The U.N. says over 8 million tons of plastic still enter the oceans each year – the equivalent of a garbage truck full of plastic every minute.

But reducing our addiction to plastic is just one half of the equation, Slat says. “These garbage patches won’t go away by themselves. Even if we were to close the tap today the plastic would still be there in 100 years.”

Slat sees his mission as a race against time. Plastic gradually breaks down into smaller and smaller pieces called microplastics which can eventually enter the food chain. Currently, however, just 8% of the plastic mass in the Pacific garbage patch is microplastics, according to research carried out by The Ocean Cleanup published in the journal Scientific Reports. “But of course what’s going to happen over the next few decades is that all the other 92% of plastic will be turned into microplastics as well,” Slat says. “So the sooner we get it out, the better.”

A thorny question remains in what will happen to the plastic that is brought back to shore from The Ocean Cleanup’s systems. Slat says he wants to turn it into branded merchandise, but acknowledges that all depends on the quality of the plastic, which remains a mystery. In any case, most of the plastic in the oceans is single-use, Slat argues. “By not making it into anything single-use, you can already reduce the chances of it ending up back in the oceans by 99%,” he says.

But it’s possible that lots of the waste returned to land will have to be carted off to third-party recycling plants and eventually recycled into more single-use plastics that might one day return to the oceans. The task ahead isn’t so much Herculean as Sisyphean. 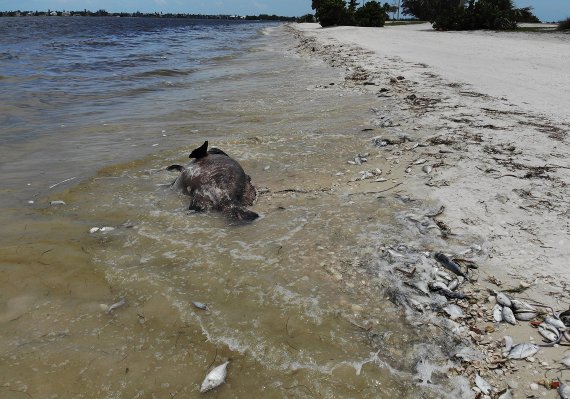 Red Tide Is Spreading to Florida's East Coast. Here's What to Know About It
Next Up: Editor's Pick