Serena Williams Is One Step Closer to More Sporting Immortality

A year ago, Serena Williams fought for her life. Now, she’s fighting for another piece of sports history. Williams wrote the latest chapter of her remarkable comeback story on Thursday night in New York City, as she made quick work of No. 19-seed Anastasija Sevastova of Latvia, 6-3, 6-0, in the U.S. Open semifinals. Williams had stumbled in the last two semifinals she reached at the U.S. Open, in 2015 and 2016 — she missed last year’s event to give birth to her daughter, Olympia, who just turned one. The complications from that delivery caused her to suffer a pulmonary embolism, required five surgeries, and left her bed-ridden for weeks.

Another semifinal loss for Williams would not have been a huge shocker. But she had alternative plans.

Williams, 36, has now reached the final of the last two Grand Slams. At Wimbledon, in July, Angelique Kerber beat her for the championship in straight sets. With a win at the U.S. Open on Saturday against Japanese phenom Naomi Osaka, who defeated American Madison Keys 6-2, 6-4 in the other semifinal, Williams would tie Margaret Court for the overall record of 24 Grand Slam singles titles. With 23 Grand Slam titles to her name, Williams already owns the post-1968 “Open Era” record.

A little over a month ago, Williams suffered the worst loss of her professional career, a 6-1, 6-0 drubbing at the hands of Johanna Konta of Great Britain at a tournament in San Jose. At that time, she was struggling to balance motherhood and her athletic career. Reaching another final in short order seemed like something of a longshot.

Williams, as is her wont, made it look easy. Sevastova broke her serve in the first game of the match; Williams upped the velocity of her groundstrokes, but Sevastova played stubborn defense. A hold put Sevastova up 2-0. The announced pro-Serena crowd of 22,450 — which was sitting under the Arthur Ashe Stadium roof due to rain — didn’t quite panic. But there was palpable concern.

No need; Williams then won 12 of the next 13 games. Sevastova kept trying drop shots; they kept landing in the net. “I think I was standing too far behind when I was playing them,” she says. “It didn’t work that well today, the drop shot.” Serena’s serves — which on average traveled some 10 miles per hour faster than Sevastova’s — overwhelmed her opponent. And Williams tried something a little different. She started charging the net. “I just usually only come in to shake hands,” she joked afterwards. But she’s been practicing her net game. The effort paid off: Williams won 24 of 28 of her net points, an 86% rate. Sevastova won just 3 net points (out of 6, for 50%).

The win sets up a tantalizing final between Williams and Osaka, 20, who considers Williams her idol. After beating Keys, Osaka was asked if she had a message for Williams.”I love you?” she replied. How did she save 13 of 13 break points against Keys? “This is gonna sound really bad, but I was just thinking ‘I really wanna play Serena,'” Osaka said. Why? “Because she’s Serena.”

“Even as a little kid,” says Osaka. “I always dreamed that I would play Serena in the final of a Grand Slam.”

Osaka started playing tennis because her father saw the Williams sisters compete at the 1999 French Open; he decided to teach his daughter the game. Osaka lived in her native Japan until she was three, then moved to Long Island, where she lived until she was nine. A dual citizen of both Japan and the United States, Osaka competes for Japan since the Japanese Tennis Association committed more resources to her development. Osaka — whose coach, Sascha Bajin, is Serena’s former hitting partner — won the top-tier Indian Wells, California tournament in March. She then beat Serena in straight sets during the first round of the Miami tournament that same month. “I can only go up from that match,” Williams says.

After that loss Williams’ coach, Patrick Mouratoglou, told her she had to put tennis before family in order to return to form. He asked Williams to immediately report to his academy in France to prep for the clay court season. Williams blanched, and chose to spend a few more weeks at home with her family. Once she arrived in France, she agreed to stop breastfeeding Olympia — she believed breastfeeding hurt her fitness level — and according to Mouratoglou, she worked harder than ever.

So now she’s back in the U.S. Open final, for a ninth time. She’s won six U.S. Open singles championships, her first coming in 1999, her last sixth in 2014. After her semifinal win, Serena said just making the final feels like a victory, But don’t buy that. Yes, just reaching the Wimbledon final this summer, and advancing this far in the U.S. Open a year removed from a near-death experience, continues to inspire her millions of admirers — especially working moms. But losing to consecutive Slam finals will gnaw at a competitor like Williams.

“This is just the beginning,” says Williams. “I’m on the climb still.” The peak is now one match away. What a view that will be. 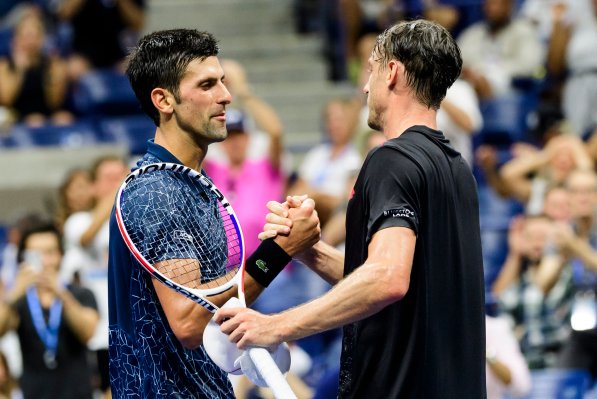 U. S. Open Match Stopped Because Player's 'Excessive Sweating' Made the Court Slippery
Next Up: Editor's Pick