12 People on Flights to Philadelphia Have 'Flu-Like Symptoms,' Officials Say

An Airbus A330 belonging to American Airlines.
Andia—UIG via Getty Images
By Jamie Ducharme

A total of about 250 passengers, plus crew members, aboard two American Airlines flights — Flight 755 from Paris, and Flight 717 from Munich — were held for medical review on Thursday, a Philadelphia International Airport spokesperson said in a statement provided to TIME. Except the 12 passengers experiencing flu-like symptoms, everyone was cleared for release, according to the statement.

Benjamin Haynes, a spokesperson for the Centers for Disease Control and Prevention, confirmed to TIME that the CDC was involved in evaluating passengers.

“CDC is aware of two American Airlines flights from Paris and Germany that arrived at PHL airport this afternoon with ill passengers on board,” Haynes said in a statement. “CDC and Philadelphia public health officers worked with EMS and [Customs and Border Protection] officials to evaluate and test the ill passengers for influenza and other respiratory illnesses. Twelve passengers from the two flights reported [a] sore throat and cough; none were identified with fever. None of the passengers are severely ill, and they will be released and informed of test results in 24 hours.”

A representative from American Airlines told TIME that all passengers deplaned normally, and neither the passengers nor the aircrafts were quarantined. Medical examinations occurred after passengers got off the planes.

The incident comes just a day after 11 people on an Emirates flight from Dubai were hospitalized after landing at John F. Kennedy Airport in New York City. Test results from those patients came back positive for influenza, and all but one had been discharged by Thursday afternoon. The remaining patient was admitted for influenza treatment. 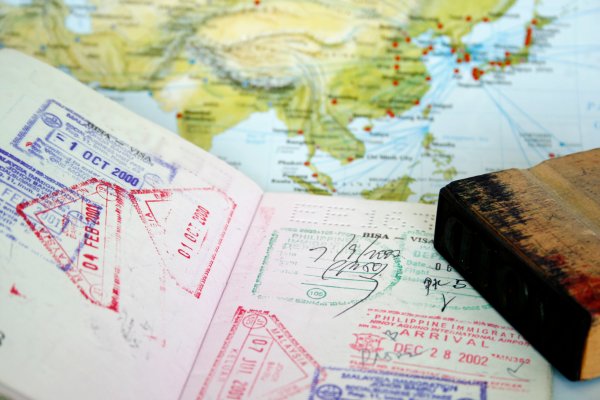 These Countries Have the Most Powerful Passports in the World
Next Up: Editor's Pick