Murphy Brown Is Back. And the Timing Couldn’t Be Better

On a sticky August night at a restaurant near the Kaufman Astoria Studios in Queens, N.Y., the reunited cast, writers and staff of CBS’s Murphy Brown, including Candice Bergen, are gathered for a drink and some food after a taping of the reboot of the iconic 1990s newsroom comedy. The series hasn’t premiered yet, and there’s a kind of wobbly joy in the room.

Most of the characters are familiar. Viewers will remember Murphy’s colleagues Corky (Faith Ford) and Frank (Joe Regalbuto) and her producer Miles (Grant Shaud). Then there are new additions like Nik Dodani as the social-media editor dragging the olds into the digital era and Tyne Daly as Phyllis the barkeep–as well as Jake McDorman, who plays Murphy’s now-grown son Avery.

But beyond the new characters, there’s also a new challenge: making a scripted show about journalists at a fake cable-news program who cover the presidency of a former reality-TV star who calls real journalists purveyors of fake news. It’s beyond meta. And in an era of reboots and revivals that range from bland (Fuller House) to lightning rod (Roseanne), Murphy Brown is re-entering the television landscape at a particularly auspicious moment. It’s a network show with aims as lofty as the many timely prestige shows on streaming and premium platforms. But it’s still a show filmed in front of a live audience, with sitcom beats familiar to anyone who watched TV in the ’80s and ’90s.

Show creator Diane English brings up another problem: How do you write an entertaining show about cable news when your competition is the 24-hour drama of actual cable news? “You think you’re going out on a limb and then you turn on the TV or you read the paper and something has been said like [Rudy] Giuliani saying truth is not the truth,” she says. “If we had ever written that, we would go, That’s ridiculous. But it has found its way into this week’s episode, because it’s a brilliant comedic line coming from a real person who took it very seriously.”

The membrane between reality and fiction, entertainment and news have been porous for a while, but on the Murphy Brown set, there’s no separation. At that afternoon’s taping, Bergen, now 72, unleashed an epic speech about a multiple-shirt-wearing character called Ed Shannon. It’s up there with any of Murphy’s classic takedowns. (Like the time she testified before Congress: “How can you claim to serve the public interest when the public is fed up with you?” asks a Senator. She answers: “Senator, I think what the public is fed up with is seeing their tax dollars spent on tropical vacations, health-club memberships and parking privileges for their elected representatives.”)

It just so happens that Shannon looks a lot like Stephen Bannon, President Donald Trump’s former campaign CEO and noted right-wing nationalist. The live audience cheers when Murphy calls men like him dinosaurs who will end up “extinct and in a museum with a gin and tonic in a gold diorama.” She hammers it home: “Underneath all that clothing is a white guy scared of losing his place at the table.”

The script of this one episode hits every raw spot in the American psyche right now–from immigration to office sexism. And it only gets more relevant from there. Murphy’s staff gets into a familiar journalistic debate over whether to have Shannon on the show to promote his book. One side argues that they would be normalizing a guy they see as a racist, but the network executives vote for having Murphy eviscerate him on camera because the ratings would be huge.

The words Nazi and libtards pop up at points during the episode, and the conversations feel a lot like the fights happening in kitchens and living rooms and break rooms across the country. The show is funny, but it’s undergirded by the national pain many feel. “We look at each other after the end of each scene and say, This show is so fearless,” says Bergen. “They take on everything and everyone.”

When Laura Krafft, the writer of the Ed Shannon episode, walks into the post-shoot restaurant gathering, people clap as she moves through the tables. She nailed it, but she will have no idea how well she captured the moment until a week after taping when the real Stephen Bannon is invited to be interviewed onstage at the New Yorker Festival and the Internet ignites in outrage. Even New Yorker employees threaten to boycott along with the punditocracy. When the episode airs, viewers will likely assume that it was written about the real Bannon incident, but in this case life followed art. We won’t spoil what happens on the show, but in real life, editor David Remnick withdrew his invitation to Bannon within hours.

Then the internet blew up. Again.

What this episode and all of the new episodes, which premieres on CBS on Sept. 27, tap into is an American culture clash wherein real injustice and perceived slights are covered with equal intensity. And perhaps the greatest division of all surrounds which voices deserve to be heard and which are too damaging to be amplified. Which is not to say that the show’s perspective is only progressive. The new Murphy Brown goes right to the marrow when it comes to the Trump Administration, but there’s a connection to his supporters via Corky, who, like Faith Ford herself, is from Louisiana and still lives there when she’s not filming. “I’m hoping that I can bridge some sort of gap here because I’ve been doing it in Louisiana for a long time,” says Ford. “I absolutely understand both sides because I live in the middle.”

And Murphy’s son Avery works as a liberal reporter for a rival conservative network called Wolf. Jake McDorman, 32, says his character may be more compassionate toward the right than Murphy because he spent the 2016 campaign out on the road talking to people all over the country. “He realizes that a lot of these people were just disgusted with the fact that they felt like they had no choice but to vote for Trump,” says McDorman.

Bergen says that she’s bracing herself for criticism from the right. After all, it won’t be the first time that her fictional character has struck a real-world nerve. In 1992, more than three years into its decade-long run on air, Murphy became a single mom. The next day, Vice President Dan Quayle accused the show of “mocking” the importance of fatherhood. The left rose up in revolt at the idea that there was only one kind of family. Two days later, the story was on the front page of the New York Times. English, of course, used a clip of Quayle criticizing Murphy in a subsequent episode. Everything is copy when you’re making a show about politics.

Murphy became the face of the culture wars, appearing on a TIME cover headlined “Hollywood & Politics” in which Lance Morrow wrote: “What is occurring today is a war of American myths, a struggle of contending stories. And pop culture, often television, is the arena in which it is being fought … On certain levels, the U.S. is a dangerously splintered and tribal country.” As she and her team put together the 13 episodes of this season, English marvels at how little things have changed since the first run.

In the ’90s, Murphy was certainly controversial. But in 2018, her mere existence on TV is political. In reprising her role as the acerbic and unapologetic Murphy, a role that earned her five Emmys and the devotion of a generation of young women who had never seen a boss like her on TV, Bergen has the chance to reach a new audience. “[Murphy] made her way in a man’s world,” says English. “People loved somebody who didn’t have that filter, who just really spoke her mind. She was most definitely a feminist but she didn’t walk around calling herself that. She just did it.” Both English and Bergen say they have heard from women who grew up with Murphy–who was in her 40s during the show’s original run–as a role model, someone who rebuilt her career after struggling with alcoholism and then started her family late.

And now, Murphy, like a Rip van Winkle of news, must learn to operate at the speed of social media after more than 20 years away. And again there’s no one quite like Bergen on TV, an actor in her 70s leading a prime-time comedy created by another woman over 70, Diane English. What are the odds? In fact, there’s no lead woman on the show under 50. (Faith Ford is in her early 50s, and Tyne Daly is also over 70.) “Maybe we’re going to be an example once again at this age,” says English. “We’re most definitely showing that we’re not done. We have plenty to offer.”

As high as the stakes are for Murphy Brown‘s second life, Bergen says she feels liberated now. “After 70, you have an angel on your shoulder.” 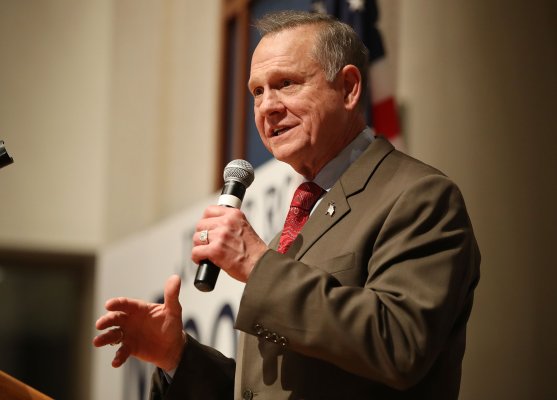 Roy Moore Is Suing Sacha Baron Cohen for Millions of Dollars After His Who is America? Appearance
Next Up: Editor's Pick