An Indian supporter of the LGBTQ community takes part in a pride parade in Bhopal on July 15, 2018.
AFP/Getty Images
By Abhishyant Kidangoor

A landmark judgment by India’s highest court has overturned a colonial-era law that criminalizes consensual gay sex, in a hard-fought victory for the LGBTQ community.

The five-judge bench reached a unanimous decision Thursday in the capital New Delhi. Delivering his decision, Chief Justice of India Dipak Misra said, “The LGBTQ community has the same fundamental rights as citizens. The identity of a person is very important and we have to vanquish prejudice, embrace inclusion and ensure equal rights.”

“History owes an apology to members of the community for the delay in ensuring their rights,” Justice Indu Malhotra, another judge in the bench said.

The court verdict is a major milestone for LGBTQ-identifying people across the country, where homosexuality remains a social taboo and gay people face endemic discrimination.

“Now more people will have the strength to come out,” says Tanveen Kaur Randhawa, one of 20 former students of the Indian Institute of Technology who filed one of several petitions in court earlier this year. “When you are treated as a criminal, it is not easy to come out and this step is very important because it ensures that you have the right to be who you are.”

India joins 17 Commonwealth nations that have overturned laws criminalizing homosexuality, a legacy left behind in most of these nations by the former British colonial rulers. Homosexuality still remains illegal in 36 Commonwealth countries, including Singapore, Kenya and Sri Lanka.

For much of the period before British rule, homosexuality featured prominently in Indian religious texts and sculptures. The law that criminalized it, Section 377, was put in place in 1861 and penalized anyone who “voluntarily has carnal intercourse against the order of nature with any man, woman or animal.” Although there has not been many prosecutions under this law, members of the LGBTQ community have claimed that it has been used to ostracize and harass them.

“A lot of people will now have the strength to approach police, if they are harassed,” Anurag Kalia, another petitioner in the case, tells TIME. Referring to incidents where victims of sexual abuse were also charged for sodomy under Section 377, he says, “The fear factor will go away.”

The ruling may also help dismantle the stigma attached to HIV and AIDS among gay men as the law impeded many from seeking the medical care they needed. Although a 2017 UNAIDS study showed that new HIV infections in India have decreased by 46% from 2010, experts say more LGBTQ people will now be able to approach doctors and medical services without the fear of discrimination.

“Even after a person’s infection is identified, they are reluctant to go to government hospitals to take the confirmation test,” says Rohit Sarkar, Senior Program Officer at India HIV/AIDS Alliance, a non-governmental organization that works to prevent HIV infections and meet other challenges related to AIDS. “Because there was not only societal discrimination but also discrimination by the law.”

In fact, the first challenge to the law was taken by the Naz Foundation, a NGO that works to create awareness of HIVS/AIDS and other sexual health issues. In 2001, they filed a petition challenging the law in the Delhi High Court.

“HIV/AIDS has been the entry point to start talks about LGBTQ rights in India,” says Sylvester Merchant, another Senior Program Officer at India HIV/AIDS Alliance. “We did not have our own Stonewall and hence, HIV was our starting point,” he says, referring to a violent uprising in 1969 by the LGBTQ community in New York City. The movement is thought to have been the starting point of the fight for LGBTQ rights in the U.S.

A long legal tussle ensued. New Delhi’s High Court decriminalized homosexuality among consenting adults in 2009, only to be later overturned by the country’s Supreme Court in 2012, following appeals from religious groups. The top court had then observed that less than 200 people were prosecuted in over 150 years for committing an offense under the section.

In 2016, five petitions to overturn the law were filed in the Supreme Court by prominent LGBTQ activists. The petitioners claimed that Section 377 violated their sexual autonomy, privacy and right to equality. Before Thursday’s verdict, about a dozen more petitions were filed by other parties arguing to quash the law.

While the ruling is welcomed by Indian LGBTQ activists, prominent voices in the community say challenges remain.

“The LGBTQ movement in India is very urban-centric,” says Samarpan Maiti, a scientist and rights activist who won the title of Mr. Gay India earlier this year. Maiti, who is a brain cancer researcher, says his motivation to sign up for the pageant was simply to create awareness. “I thought this would send a message to people in rural areas as they would likely take the word of a scientist who is living as an openly-gay man.”

Maiti has been working with LGBTQ people in underprivileged parts of India. He says spreading awareness to remote areas is a major hurdle as a majority of people in these regions consider homosexuality a disease, or at best, a phase. Maiti recalls how his mother blamed homosexuality on his city life when he came out to his family in 2016. Gaining her acceptance was a process that took a long time, he says.

“She never spoke about it and I was the one always bringing it up,” he says. “ I started showing her movies about the LGBTQ community and our issues and that’s how she finally accepted me.”

Gaining that kind of societal acceptance will not be a smooth journey either.

Petitioners faced strong opposition in court with Christian religious groups arguing against repealing the law. Even though Hindu and Muslim groups decided to stand back and not legally challenge the petition, members from all religious groups have vociferously defended their anti-gay stand in speeches and media appearances.

LGBTQ activists say the next step is pushing for marriage equality and property rights, but they will face an ongoing battle to ensure that their new-found right is not taken back from them, as it was in 2012.

“We cannot rest on our laurels,” says Harish Iyer, a prominent LGBTQ activist, who shot to fame after his mother posted a matrimonial advertisement seeking grooms for her son in 2015. “When love comes out of the closet, hate shall too raise its hood.” 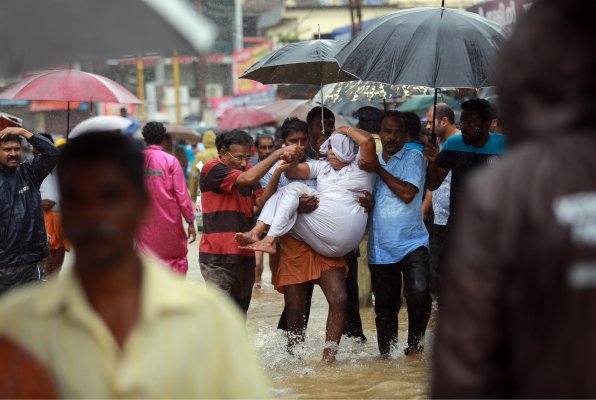 Why Were the Floods in India's Kerala State so Deadly?
Next Up: Editor's Pick