Sen. Bernie Sanders (I-VT) speaks during a news conference regarding the separation of immigrant children at the U.S. Capitol on July 10, 2018 in Washington, DC.
Alex Edelman—Getty Images
By Jennifer Calfas

Targeting some of America’s largest corporations, Sen. Bernie Sanders introduced a bill Wednesday that would tax companies like Amazon and Walmart for the amount of money their employees receive in federal benefits.

Titled the Stop Bad Employers by Zeroing Out Subsidies Act (or the “Stop BEZOS” Act), the legislation is aimed at taxing companies with employees who earn low wages and receive federal benefits like food stamps, public housing and Medicaid. Rep. Ro Khanna, a California Democrat, introduced similar legislation in the House last year.

The bill targets companies with 500 or more employees and would tax “equal to 100 percent of the qualified employee benefits” low-wage earners receive. With its title, the legislation jabs Amazon CEO Jeff Bezos — who is now far and away the richest person in the world with a net worth of about $168 billion and saw his company reach $1 trillion in market cap Tuesday.

“I think it is fair to say the American people are tired of having to subsidize the wealthiest people in this country who are paying wages that are just so low that people can’t get by,” Sanders said at a press conference.

“Our legislation gives large, profitable employers a choice: Pay workers a living wage, or pay for the public assistance programs their low-wage employees are forced to depend on,” Sanders added.

Citing a study from the University of California Berkeley Labor Center, Sanders said Americans pay $150 billion a year in taxes for employees with low wages who rely on government assistance programs to help make ends meet. Earlier this year, Amazon said in a government filing that its median salary is $28,446 — a figure, Amazon said, that include the compensation for part-time employees. The median salary for full-time Amazon employees is $34,123, the company said.

Amazon has pushed back on claims made by Sanders in recent weeks, saying the senator made “inaccurate and misleading” accusations against the company.

While Sanders has repeatedly targeted Amazon and Bezos in his battle against corporate welfare, he says the bill focuses on other large corporations with low-paid employees. He mentioned Walmart as well, one of the largest employers in America, and pointed to its owners, the Walton family. Walmart announced in January that it would raise its minimum wage from $9 to $11. 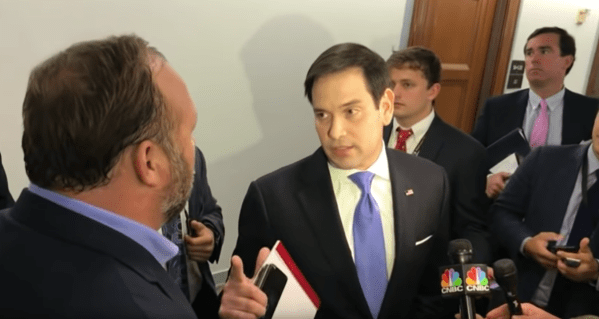