China’s Communist Party has snuffed out rumors President Xi Jinping will attend a military parade to mark the 70th anniversary of North Korea’s founding, which satellite images show could be the largest celebrations of their kind since North Korean Leader Kim Jong Un came to power in 2011.

Speculation had been rife that Xi would travel to Pyongyang to observe the annual Foundation Day celebrations on Sept. 9, but analysts told the Associated Press that Beijing’s decision to send a Li Zhanshu, the party’s third-ranking official, reflects Beijing sentiments over the lack of progress Pyongyang has made toward denuclearization.

Photographs published by Pyongyang-monitoring site 38 North show a larger build-up of shelters near the parade training ground than ever observed under Kim. In a blog post accompanying the images, analyst Joseph S. Bermudez Jr. writes that while the high number of shelters is not a definitive measure of its eventual size, it “suggests that Sunday’s parade will likely be considerably larger than the military parade earlier this year.”

North Korea traditionally commemorates its founding on Sept. 9, 1948, with pageantry and displays of its military arsenal; last year’s anniversary came weeks after North Korea conducted its sixth nuclear test and featured a gala event in honor of the country’s nuclear scientists. But while the scale of the 70th-anniversary celebrations — which will also feature North Korea’s famous choreographed mass games for the first time in five years — may have been scaled up as rumors of Xi’s attendance swirled, analysts say their size alone is unlikely to rile the U.S.

“It doesn’t matter how many soldiers or tanks or aircraft goose step or fly across Kim Il Sung Square,” Euan Graham, Director of the International Security Program at the Lowy Institute, tells TIME. What would be provocative, he says, is the parading of long-range missile launchers “as a way of flaunting the nuclear and long-range capabilities that North Korea has recently developed.”

Read more: Forget Donald Trump and Kim Jong Un. Here’s Why the People of North Korea Are the Real Solution

None of the types of launchers used for Pyongyang’s larger intermediate-range or intercontinental ballistic missiles are visible on 38 North’s satellite images, taken on Aug 31, although “they could still be onsite but housed in the heavy equipment shelters,” the post’s author notes.

In November last year, Kim declared his nuclear program complete after testing an intercontinental ballistic missile (ICBM) North Korea claims is capable of delivering a nuclear warhead anywhere in the continental U.S. That preceded a thaw in inter–Korean and North Korean–U.S. relations.

In a series of tweets last week, Trump said that restarting American war games with South Korea — which he froze following the summit — remained off the table for now and blamed China for stalling denuclearization talks.

Beijing remains committed to the U.N’s economic sanctions on the Kim regime, despite improving relations with North Korea, AP reports. A spokesperson for China’s foreign ministry told reporters Washington should “engage in self-reflection and stop flip-flopping and blaming others.”

While a huge 70th-anniversary parade might be meant to project power to a high-level Chinese delegation, says 38 North’s Managing Editor Jenny Town, it would also be intended as a message of strength to a domestic audience that has felt the economic pinch caused by sanctions over the past year.

“It may also be an overall projection of confidence that the North Koreans likely feel at the moment,” Town says, “having been able to change the diplomatic mood in their favor in less than six months after being the pariah for their nuclear pursuits for so long.” 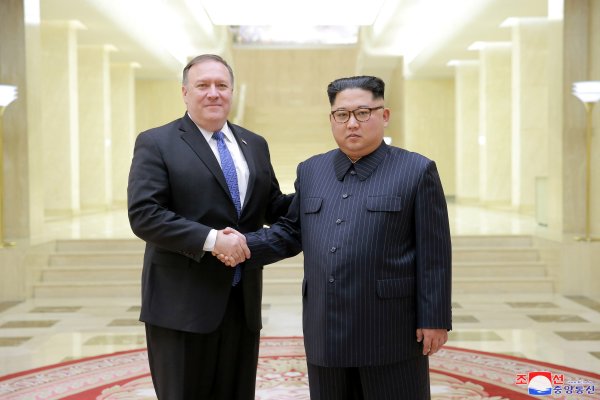 North Korea Accuses the U.S. of 'Hatching a Criminal Plot'
Next Up: Editor's Pick