Anger and Partisanship Dominated Day One of Brett Kavanaugh's Hearings

“If confirmed to the Court, I would be part of a Team of Nine, committed to deciding cases according to the Constitution and laws of the United States,” he said. “I would always strive to be a team player on the Team of Nine.”

Kavanaugh’s invocation of the lofty ideals of teamwork in partnership marked a stark contrast to the stunning partisanship and rancor that dominated the first day of his hearings. Even as the nominee stuck to the script that has successfully guided predecessors from both parties to the nation’s highest court, Democratic senators were prepared to show just how much they think the norms have been broken.

Within minutes of Republican Judiciary Committee Chairman Chuck Grassley beginning the session Tuesday morning, Democratis Sen. Kamala Harris of California cut in, arguing that she hadn’t had enough time to review more than 40,000 documents on Kavanaugh that were released Monday night.

“We can not possibly move forward with this hearing,” Harris said. As Grassley ruled that her motion was out of order, she fired back, “If we cannot be recognized, I move to adjourn.”

For more than an hour, the hearing went completely off the rails as Harris and each of the other nine Democratic members of the committee talked over Grassley’s attempts to begin his opening statement, criticizing the document review process and demanding to delay the hearing for more time to review Kavanaugh’s record.

“We are rushing through this process in a way that is unnecessary,” said New Jersey Democrat Cory Booker.

President Donald Trump highlighted the Democratic objections in tweets Friday evening, arguing that they were a “display of how mean, angry, and despicable the other side is.”

Both sides could make a point about transparency using numbers. The committee has received more documents about Kavanaugh than any previous Supreme Court nominee, but those more than 400,000 documents make up just 10% of his record, and don’t include records from his time working as staff secretary in George W. Bush’s White House.

Senators on both sides of the aisle bristled at each other, with little sign of collegiality or the team mentality that Kavanaugh — or “Coach K” — promotes when he coaches his daughter’s basketball team, according to a letter from team parents cited by Republican Sen. Jeff Flake of Arizona. Republican Sen. John Cornyn of Texas said the hearing had devolved into “mob rule” by the Democrats. Long-serving Democratic Sen. Patrick Leahy of Vermont lamented the way the nomination was playing out. “I’m just sorry to see the Senate Judiciary Committee descend this way,” he said.

Overseeing the chaos, Grassley let the Democrats vent for more than an hour, but wouldn’t call a vote on a motion to adjourn the hearing. “If people have got something to say, this chairman is going to let them say it,” he said. “But it’s pretty boring to hear the same thing all the time.” Later, as Cornyn complained that Democrats were running over their 10-minute allotment for opening statements, Grassley sighed, “I let the committee run me this time.”

Much of the Democrats’ frustration may be exacerbated by the fact that they likely won’t be able to prevent Kavanaugh from being confirmed. If Republicans stick together, they can push him through with a simple majority without any votes from the other side. Loudly and publicly voicing opposition is the only real recourse Democrats have to try to affect the outcome.

Read More: Democrats Want to Stop Brett Kavanaugh. They May Be Out of Options

Republicans on the committee charged that Democrats were following a game plan. Illinois Senator Dick Durbin, the No. 2 Democrat in the Senate, confirmed that there was a conference call over the weekend for Democrats to map out their strategy for the hearing. “There are always many conference calls (and meetings, etc.) before Supreme Court confirmation hearings,” a Democratic aide told TIME in an email. “There has been a lot to talk about in the last several days, including over the long holiday weekend.”

While Kavanaugh said that a judge must be “a neutral and impartial arbiter who favors no litigant or policy” and that he does not “decide cases based on personal or policy preferences,” the controversial president who nominated him hung heavy over many of the Democrats’ statements and Tuesday’s proceedings demonstrated what a uniquely political fight Kavanaugh’s nomination has become. It is “ultimately an effort to re-litigate the last presidential election,” said Republican Sen. Mike Crapo of Idaho.

Tensions in the hearing room, already high among the senators on the dais, were amplified by near-constant interruptions by protesters from the seats reserved for spectators in the back. As the committee bickered up front, dozens of protesters were removed throughout the day for standing up and yelling during the proceedings. “Kavanaugh is a danger to the future of America!” one protester cried. “My daughter deserves the right to choose!”

“Moving forward with this nomination is against everything we stand for as a nation!” yelled another protester wearing a shirt that said “spiritual gangster” on it. Multiple disruptions came from people who said they had preexisting conditions and were worried about their healthcare coverage. A group of women wearing red handmaids’ robes from the television show “The Handmaid’s Tale” kept a silent vigil outside the hearing room as people entered in the morning; as other demonstrators were escorted out throughout the day, those in the hearing room could still hear them chanting “Hell nah, Kavanaugh!” outside.

In fact, irritation with disruptive protesters became one of the only issues that sparked agreement between political parties during the day. Democrat Leahy said he wouldn’t keep reading his opening statement during the interruptions. “I don’t care whose side they’re on,” he said. Republican Sen. Orrin Hatch of Utah complained about the “insolence” of the protesters and said, “These people are so out of line they shouldn’t even be allowed into the doggone room.”

Throughout the chaos emanating from both the front and back of the room, Kavanaugh sat quietly at his desk facing the senators, in the eye of the storm.

“The Supreme Court must never, never be viewed as a partisan institution,” Kavanaugh said during his opening statement, which didn’t begin until just before 5 pm. “The Justices on the Supreme Court do not sit on opposite sides of an aisle.”

It was a rosy sentiment, and one that was undermined by the nearly seven hours of highly political fighting that had preceded it. 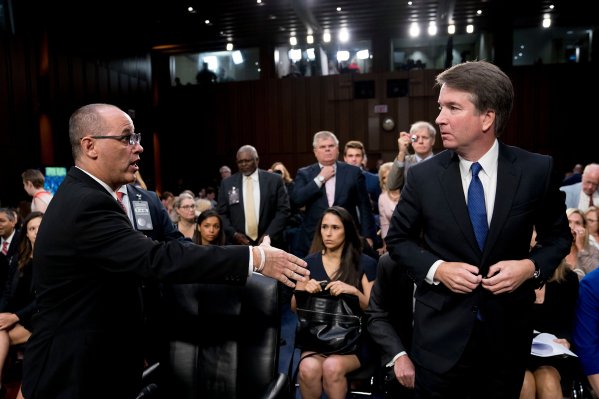 Parkland Father Tries to Shake Hands With Kavanaugh
Next Up: Editor's Pick