After Supreme Court Justice Ruth Bader Ginsburg issued a fiery dissent in Shelby County v. Holder, a case decided in June 2013 that invalidated a key part of the Voting Rights Act, then-NYU law student Shana Knizhnik was inspired to launch a Tumblr blog called The Notorious R.B.G. The site depicted a fierce image of the diminutive justice in the style of famed rapper The Notorious B.I.G.—and the famous meme was born.

That image helped turn Ginsburg into a bona fide pop culture icon—an unusual designation for any octogenarian, let alone a justice on the nation’s highest court. Now, the nation is mourning the improbable pop culture figure who died on Sept. 18 at the age of 87 of complications from metastatic pancreatic cancer.

The Notorious RBG meme has been so successful, Knizhnik told TIME in an interview conducted before Ginsburg’s death, because of “this humorous juxtaposition and contrast between the ’90s hip-hop icon that was B.I.G. and this octogenarian Jewish grandmother, which certainly doesn’t evoke images of bravado.”

“But at the same time, her work has spoken truth to power and she’s really done an amazing amount—even before she was a Supreme Court justice,” Knizhnik said.

Her death reiterated her wide-reaching popularity, and comes just two years after she was the subject of two movies: the documentary RBG and the Felicity Jones-fronted biopic On the Basis of Sex. She was also long parodied by Kate McKinnon on Saturday Night Live (Ginsburg had said she approved of McKinnon’s portrayal.) The meme has also resulted in two books: Notorious RBG: The Life and Times of Ruth Bader Ginsburg, written by Knizhnik and journalist Irin Carmon in 2015, and The RBG Workout, a detailed breakdown of the justice’s intense fitness regimen written by her personal trainer, Bryant Johnson, in 2017.

View of demonstrators, many with signs, during the Women's March on Washington, Washington DC, January 21, 2017. One sign features an illustration of US Supreme Court Justice Ruth Bader Ginsburg and reads 'Notorious RBG'. (Photo by Barbara Alper/Getty Images)
Barbara Alper—Getty Images

Meanwhile, her fan base on the left largely regards her as a hero. Some devotees plastered the Notorious RBG image on posters at the 2017 Women’s March in Washington, D.C. Justice Rebeca Martinez, who serves on Texas’ Fourth Court of Appeals, told TIME in an interview in 2018 that she organized a screening for RBG in Austin attended by guests dressed up like Ginsburg. Pennsylvania-based lawyer Amy Wallace said she adorned her house with art featuring the justice—and even got a tattoo of Ginsburg in April 2017.

And the meme continues to endure.

“Sometimes memes are flash in the pans — here today and gone tomorrow,” Ryan Milner, an associate professor of communication at the College of Charleston, who studies memes, told TIME in an interview conducted prior to Ginsburg’s death. “[This meme] has worked for a long time—especially as we’ve moved from the Obama administration to the Trump Administration and the court has gotten more conservative.”

Ginsburg is often credited as one of the primary legal architects of equal rights protection for women. As an attorney, she successfully argued several landmark equal rights cases in front of the Supreme Court, including a case that guaranteed men and women in the military equal access to a dependent’s allowance, and another case that allowed widowers to receive the same Social Security survivors’ benefits as widows.

President Bill Clinton appointed Ginsburg to the Supreme Court in 1993, and the Senate confirmed her by a vote of 96-3. She was only the second woman appointed to the court, following Sandra Day O’Connor’s 1981 appointment by then-President Ronald Reagan. As an associate justice, Ginsburg wrote landmark decisions in several cases, including one that allowed women to attend the Virginia Military Institute for the first time.

Her dissents also made an impact. When Lilly Ledbetter‘s pay discrimination case made its way to the Supreme Court, an all-male majority ruled in 2007 that Ledbetter’s case was invalid because she didn’t file her discrimination claim within an 180-day period. Ginsburg said the Court “does not comprehend, or is indifferent to, the insidious way in which women can be victims of pay discrimination,” and encouraged Congress to find a remedy. In 2009, President Barack Obama signed the Lilly Ledbetter Fair Pay Act into law.

Off-duty, her strict workout regimen with Johnson—whom she started working with in 1999 after her first bout with cancer—also contributed to her “notorious” persona. Johnson called Ginsburg a “super diva,” and said she would often show up to their training sessions on an hour’s sleep.

“I remember the justice had given me a couple of books about her, but I never really read them because the justice didn’t hire me to be a fanboy,” he said before her death. “It wasn’t until I saw the documentary that I realized why she has this cult following…women have so many rights because of all that she’s done quietly, behind the scenes—like a ninja.”

But despite her larger-than-life persona, the real Ginsburg was reserved and hard-working, according to people who worked with her in the past. Elizabeth Langer, a former attorney who worked with Ginsburg on the Women’s Rights Law Reporter journal at Rutgers, described her in 2018 as “very reserved and very diligent.” Kate Andrias, a law professor at the University of Michigan who clerked for Ginsburg in the 2006 term, said that she was an “exceedingly demanding” boss, but she also cared about her staff—mentoring them, taking them to the opera and bringing in cakes for birthdays made by her husband, Marty, who died in 2010.

“There’s a fairly stark contrast between the meticulous, careful and reserved person that I worked for and this pop culture icon,” Andrias told TIME in an interview before her death. “But, at the same time, when we were working for her, we could see her quiet wit and commitment to justice.”

Ginsburg seemed amused by her late-in-life fame. She said in 2014 that she owns “quite a large supply” of Notorious RBG shirts. She often liked to compare herself to the Notorious B.I.G. by noting they were both born in Brooklyn. In an interview at New York Law School in February 2018, she marveled at her status as a pop culture icon, saying: “I am soon to be 85, and everybody wants to take their picture with me.”

‘Her legacy isn’t over’

Many say it’s hard to deny the significance Ginsburg has had for so many women.

After giving birth to her daughter, Ginsburg entered Harvard Law School as one of only a handful of female students. She eventually graduated from Columbia Law School at the top of her class—but she didn’t receive any job offers. When one of her professors recommended her for a clerkship with then-Supreme Court justice Felix Frankfurter, she was turned down because he reportedly “wasn’t ready to hire a woman.“

“A lot of us have similar stories—I do,” Langer told TIME in 2018. “Her career path is a remarkable path for women to follow.”

The women who spoke to TIME for this story all say that they have their law careers thanks to Ginsburg—both for her work shaping equal rights as an attorney and as a trailblazer in her own career.

“I know that without her efforts, I wouldn’t be in this seat. I grew up in this world—especially as a young woman of color—where the roles of women and men were divided,” Martinez, the Texas justice, said. “Justice Ginsburg knew that changing the culture meant changing the laws.” 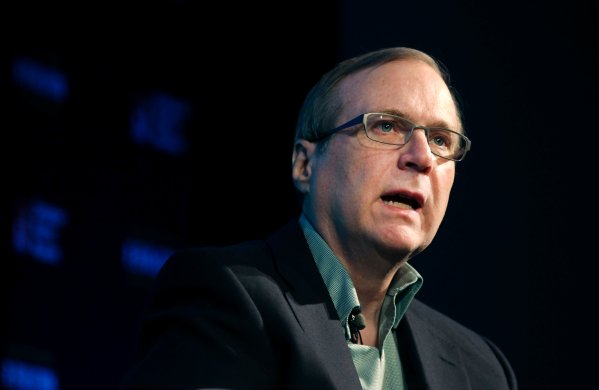 Steven Pinker's Tribute to the 'Low-Key Extravagance' of Microsoft's Paul Allen
Next Up: Editor's Pick