Ahead of Judge Brett Kavanaugh’s confirmation hearings Tuesday, Americans have expressed some of their lowest levels of support for a Supreme Court nominee since the 1980s and are split on his confirmation, according to a new poll from ABC and The Washington Post.

The public is divided on President Donald Trump’s Supreme Court pick, with 38 percent of Americans saying he should be confirmed by the Senate, and 39 percent saying he should not be, the poll says.

The results mark the most significant opposition to a Supreme Court nominee’s confirmation since 1987, when former President Ronald Reagan nominated Judge Robert Bork to the Supreme Court. (Fifty-seven percent of Americans said Bork should not be confirmed; he was ultimately rejected.)

Comparatively, 32 percent of Americans said Justice Neil Gorsuch should not be confirmed ahead of his Senate hearings, and 44 percent said he should. Former President Barack Obama’s nominees — Justice Sonia Sotomayer and Justice Elena Kagan — received a bit more support, with 60 percent and 56 percent of Americans supporting their nomination, respectively. All three of those nominees were confirmed by the Senate.

The public’s views of Kavanaugh falls largely along party lines, with 78 percent of Republicans and just 13 percent of Democrats supporting his nomination. Democrats have pushed back on Kavanaugh’s nomination with hopes to bar him from filling the seat vacated by retired Justice Anthony Kennedy, who was seen as the court’s swing vote. However, it’s unlikely his nomination will be derailed in a Republican-controlled Senate.

Debate over Kavanaugh’s nomination has also centered on the issue of abortion rights. More Americans believe the Supreme Court should not make it more difficult for women to get abortions, the ABC/Post poll says, and 59 percent of Americans believe Kavanaugh should publicly state his opinion on the matter before he being confirmed. Sen. Susan Collins, a Republican senator who Democrats have targeted as a potential ally to block Kavanaugh’s nomination, met with Kavanaugh last month and said he believed Roe v. Wade settled the issue.

The poll was conducted by Langer Research Associates and has a margin of sampling error of 3.6 points. 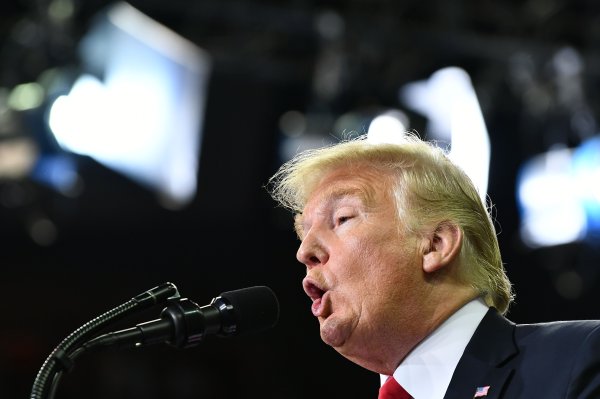 Trump Attacks Sessions for Charging Republicans
Next Up: Editor's Pick