The Ain Zara prison, which was handed over to the Justice Ministry from a Tripoli-based militia, seen in Tripoli, Libya on Feb. 2, 2012.
Ismail Zetouni—Reuters
By Eli Meixler

About 400 inmates escaped from a prison near the Libyan capital in a mass-jail break on Sunday after a week of deadly clashes between rival armed groups in the city.

The prisoners forced open doors and overwhelmed guards in the Ain Zara prison in southern Tripoli, Reuters reports, citing a police statement. The surrounding area has been wracked with fighting over the past week that pitted militia groups the Seventh Brigade, which hails from from Tarhouna, a town about 40 miles southeast of Tripoli, against the Tripoli Revolutionaries’ Brigades (TRB) and the Nawasi Brigade.

Numerous armed militias have attempted to wrest control of the city since the ouster of Libyan dictator Muammar Gaddafi in 2011. The recent surge in fighting, which began on Aug. 26, has included shelling in densely populated residential areas, with the death toll rising to 39 as of Friday and over 100 wounded, according to the Libyan Ministry of Health. An estimated 1,170 households, or around 5,800 people, have also been displaced, according to the European Civil Protection and Humanitarian Aid Operations.

Many of the prisoners were reportedly supporters of Gaddafi and found guilty of killings during the 2011 uprising, according to Agence France-Presse.

In a statement Sunday, U.N. Humanitarian Coordinator in Libya Maria Robeiro called on all warring factions to “immediately refrain from the use of indiscriminate weapons in residential areas, cease all hostilities and resume ceasefire talks.”

“Families in Tripoli are living in fear due to indiscriminate shelling landing in their neighborhoods from a far with no knowledge of who is behind these attacks and where they are coming from,” Robeiro said in a statement.

The U.N.-backed government in Tripoli has declared a state of emergency, while the U.N. Mission in Libya invited the “various concerned parties” to meet on Tuesday for an “urgent dialogue on the security situation.” U.N. Secretary General Antonio Guterres has also offered to moderate peace talks.

Separately on Sunday, two people were killed and seven wounded when a rocket hit a displaced persons camp for the Tawergha people in Tripoli. 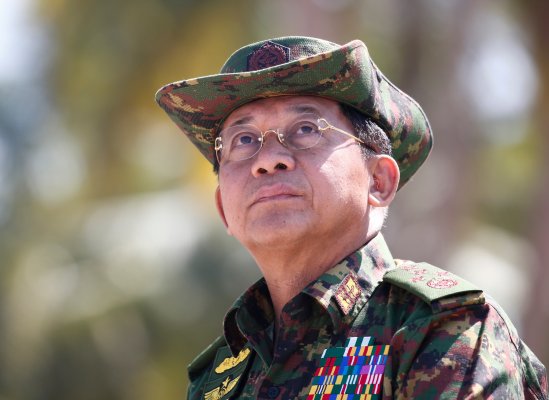 Why Facebook Is Cracking Down on Myanmar Military Accounts
Next Up: Editor's Pick