The Suspiria Remake Isn't That Scary. But That's Not Even the Worst Thing About It

Girl goes to ballet school run by witches: Now there’s an elevator pitch for you, and it pretty much covers the plot of Dario Argento’s glorious 1977 giallo masterstroke Suspiria: Jessica Harper, as naïve young ballet student Suzy Bannion, is put on a secret diet that makes her feel weird and later discovers a hidden room at the school where witches get together and hatch evil schemes. Suspiria was never about the plot, though; it was all about the vibe, the bold splashes of fuchsia fake blood, the magnificent op-art board-game production design, and the music, a spooky, percussive earworm by the Italian group Goblin.

Luca Guadagnino, who may be a genius of sorts, has reimagined Suspiria. But it isn’t a work of genius. (The film, an Amazon production, premiered in competition at the Venice Film Festival.) Guadagnino has specialized in lush, passionate movies—I Am Love, Call Me By Your Name—that are gorgeous to look at but also manage to speak in a language of smell, taste and touch, and any number of other sensations that we don’t even have words for. They’re wonderful films, and the fact that this new Suspiria is, technically speaking, a remake of a classic shouldn’t be held against it. Railing against the idea of remakes is counterproductive: They’re no more invasive or sacrilegious than old symphonies reinterpreted by new orchestras, and the idea of what a sensualist like Guadagnino might do with this material was intriguing.

But this new Suspiria is bland, grisly, boring and silly. There is nothing poetic or erotic about it. It’s not the fault of the actors, among them Dakota Johnson as Susie, reinvented here as a Mennonite naïf with big Martha Graham dreams, or Guadagnino regular Tilda Swinton as Madame Blanc, one of the top instructors at the elite Berlin dance academy where Susie is accepted as a student. (She’s also a witch, of course, one of many who flit about the school leering and smirking at the young dancers while also blathering on about a mysterious unseen presence named Mother Marko.) These two performers, and a host of hardworking supporting ones (including Harper, in a cameo), do all that is asked of them, sometimes even making their actions—if not their Pina Bausch by way of “What a Feeling!” dance movies—quasi-believable.

But Guadagnino is tripped up by his own ambitions. He has made the plot and the setting insanely complicated: The story, which is divided into six interminable acts—plus an epilogue, oy!—is set in 1977 Berlin, just as the still-divided city is gripped by the drama of the Lufthansa Flight 181 highjacking and violent Red Army Faction activity. Somehow, these details are supposed to be integral to the story: When one of the dancers (it’s Chloë Grace Moretz, in a teeny-tiny role) goes rogue, nearly exposing the school’s secrets, the witchy schoolmarms tell the other students she’s a terrorist. But mostly, the political backdrop is an extra layer of needless complication. Guadagnino is thinking too much and feeling too little.

And even if Suspiria is at times unpleasantly grim, it’s not exactly scary. There are nightmare visions of worms, broken mirrors and blood-smeared walls. In the movie’s most unnerving sequence, one young dancer becomes a kind of possessed puppet; she’s thrown violently against walls, her limbs becoming twisted and broken. This is after the witches work some eye-voodoo on her, causing her to shed copious, gelatinous, blinding tears. But all these bodily fluids and bones poking through skin notwithstanding, this Suspiria is more cerebral than visceral. The squeamish should know that the witch shenanigans include some ritual meat-hookery. There’s also a kind of Pilobolus hootenanny in a red room, presided over by an extra-senior-citizen Jabba the Hut in sunglasses. Don’t say I haven’t warned you.

It could all be OK, maybe, if Guadagnino, cinematographer Sayombhu Mukdeeprom and production designer Inbal Weinberg had chosen a more vibrant color palette: While it’s their right to rethink Argento’s vision as they like, does anyone really want to see a beige Suspiria? On the plus side, the music, by Radiohead’s Thom Yorke, is suitably chilly and sonorous, and the costumes are rather grand: Giulia Piersanti gets the late-1970s Eyes of Laura Mars thing down perfectly, putting the cast in lots of tall boots, belted coats and billowy tunic dresses, with the occasional swirling cape. There are some nice kimonos—good for running to and fro between secret rooms—and Swinton, in one of the two roles she has here (one should be left a surprise) has a superb wardrobe of floor-sweeping monastic black jersey dresses. Of course, she looks great in everything, and watching her is never dull. She’s a witch with a pulse. But not even her powers are enough to reanimate the gray corpse of this Suspiria. 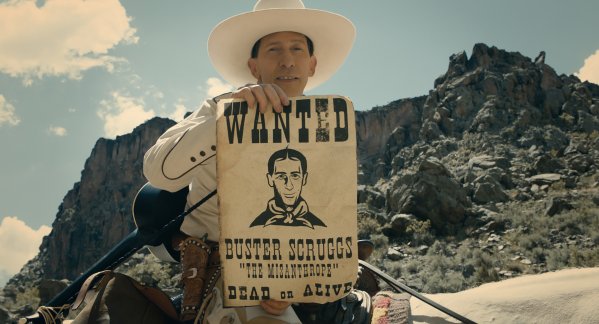 Venice Review: The Coen Brothers Reinvent the Classics in The Ballad of Buster Scruggs
Next Up: Editor's Pick