An Australian filmmaker was sentenced Friday to six years in prison by a Cambodian court on espionage charges related to flying a drone at an opposition party rally last year.

James Ricketson, 69, faced up to 10 years in prison for “collecting information that could be damaging to national defense” per the country’s criminal code. He has been detained since his arrest in June 2017.

“My love for Cambodia and its people is heartfelt,” Ricketson said in a statement released by his family after the verdict was announced Friday, his 456th day in Phnom Penh’s overcrowded Prey Say prison. “I am a film maker and a journalist, I have not committed the crime for which I have been sentenced.”

“They whisked him out of the room pretty quick, I didn’t get a chance to talk to him or give him a hug,” Jesse Ricketson tells TIME. “It’s just heartbreaking.”

Prosecutors said Ricketson, a frequent visitor of Cambodia over the past 23 years, used documentary filmmaking as a cover for espionage, though they never specified which country he was believed to be spying for.

“All his filming activities cause the international community to hate Cambodia, this is his intention,” prosecutor Sieng Sok said in a closing statement quoted by ABC.

The CNRP was disbanded last year amid a crackdown ahead of elections this past July, in which Hun Sen’s ruling Cambodian People’s Party won all 125 seats.

“From day one, James Ricketson has been a scapegoat in Hun Sen’s false narrative of a so-called ‘color revolution’ used as an excuse to crack down on the political opposition and civil society critics,” Robertson said. “Cambodia should stop tormenting Ricketson and his family, release him immediately and unconditionally, and quash this conviction.”

While on a visit to Indonesia, Australian Prime Minister Scott Morrison told reporters Friday that Ricketson “can expect to get all the consular and other support from the Australian government you would expect in these circumstances.”

In a statement to TIME, Australian Minister of Foreign Affairs Marise Payne said Ricketson’s options were limited to “the avenues open to him under Cambodian law.”

Those include filing an appeal or petitioning Cambodia’s King Norodom Sihamoni for a pardon.

“At the moment we’re just processing the news,” Jesse Ricketson tells TIME. “We’re going to keep doing everything we can to keep bringing this situation to an end as quick as we can.” 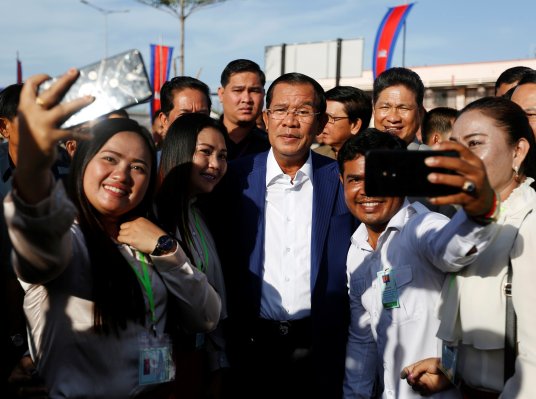 U.S. Expands Visa Bans on Cambodia After 'Flawed' Election
Next Up: Editor's Pick