How China Supports the Slow Strangulation of Myanmar’s Kachin Minority

Displaced Kachin villagers cross the Malikha river on a ferry to escape the fighting near Myitkyina between the Kachin Independence Army and the Myanmar Army, April 26, 2018.
Zau Ring Hpra—AFP/Getty Images
Ideas
By David Baulk / Fortify Rights
David Baulk is a Myanmar Human Rights Specialist with Fortify Rights and author of the recent report, “They Block Everything”: Avoidable Deprivations in Humanitarian Aid to Ethnic Civilians Displaced by War in Kachin State, Myanmar. Follow him on Twitter @DavidBaulk

On Monday, a U.N. Fact-Finding Mission called for top Myanmar military officials to be prosecuted for genocide, crimes against humanity, and war crimes. Their 18-month long investigation focused not only on the plight of the Muslim Rohingya, but also on the brutal wars in northern Myanmar.

Since 2011, armed conflict between the Myanmar military and the Kachin Independence Army (KIA) — one of the country’s many ethnic armed groups — has driven more than 100,000 civilians from their homes in Kachin State, with many fleeing toward the China border. Like the Rohingya, the predominantly Christian ethnic-Kachin are fleeing killings, torture, rapes and other violations by the Myanmar military. But there is an unseen strategy in the military’s war against the Kachin: the slow strangulation of aid to tens of thousands of civilians fleeing conflict.

For the last five years, my colleagues and I at Fortify Rights documented how Myanmar authorities have willfully frustrated aid groups’ efforts to access conflict-affected areas. People are surviving, but barely. Seven years into the conflict, and civilians still lack adequate access to food, healthcare, shelter and sanitation.

And if the Myanmar and Chinese governments have their way, things are slated to get much worse.

On May 21, the Myanmar military threatened to prosecute one of the country’s largest providers of humanitarian aid for delivering life-saving materials to a community in an area controlled by the KIA. If convicted, representatives of the Kachin Baptist Convention could face up to three years in prison. But the military’s attempts to choke off humanitarian aid to these communities are nothing new.

Since 2011, Myanmar authorities have denied the U.N. and aid groups unfettered access to displaced people living in areas under control of the KIA. Authorities will occasionally allow aid groups access to displaced communities in places tightly controlled by the military but effectively deny them access to civilians in conflict-affected areas. Given that much of Kachin State is a war zone right now, this is a problem.

Read more: Inside the Kachin War Against Burma

But the Myanmar military isn’t doing this by themselves. China also plays a role. A new 68-page report we released this week reveals that Beijing privately communicated to the Government of Myanmar and non-state ethnic armies that they did not want any U.N. or international aid groups near their shared border with Kachin State. To be clear, this is a foreign government instructing Naypyidaw to deny aid groups access to internally displaced Myanmar nationals.

Myanmar authorities were apparently all too willing to comply.

Moreover, aid groups crossing the border into China to evade restrictions in Myanmar are unable to operate officially and are forced to take enormous personal risks to do their work. Authorities in China harass groups they suspect of providing support to displaced communities, in some cases arresting them. Aid workers told us that when it comes to denying civilians’ access to assistance, the Chinese and Myanmar authorities are of one mind.

Couple these restrictions on aid groups on both sides of the Myanmar-China border with diminishing funding for aid from the international community, and there are more than 100,000 men, women, and children ripe for exploitation. The nexus between the conflict in Kachin State and the trafficking of Kachin women and girls to China has been well documented by the Kachin Women’s Association of Thailand (KWAT) and others, and the problem continues.

Nevertheless, Kachin civil society has been engaged on all fronts, from aid to advocacy. Earlier this year, more than 30 Kachin groups cited the Myanmar military’s crimes in Kachin State and called for the situation in Myanmar to be referred to the International Criminal Court (ICC).

The actions of the Government of Myanmar have prompted U.N. Special Rapporteur Yanghee Lee to remind the authorities that, “Any willful impediment of relief supplies may amount to war crimes under international law.”

Despite calls from U.N. officials, world governments and civil society groups to hold the Myanmar military accountable for their crimes in Kachin State and elsewhere, Myanmar’s power-brokers remain largely intransigent, resting with the assurance that their impunity is, in effect, backed by Beijing.

Myanmar’s strategic importance for China can hardly be overstated. The success of Beijing’s US$1 trillion Belt and Road Initiative (BRI) — which seeks to boost China’s trade within Asia and beyond through the development of infrastructure projects — rests on its access to the Indian Ocean via Myanmar. This and other multi-billion dollar investments in gas and oil, hydropower, jade, and other minerals have doubtless informed China’s push back on international calls for accountability as details of the Myanmar military’s crimes have made headlines.

But China’s “protection” for Myanmar is not a foregone conclusion, particularly within the U.N. Security Council. U.N. member states can and should employ unprecedented leverage to ensure Myanmar is referred to the ICC. The likelihood of China voting for such a referral is remote, but China getting out of the way and letting justice take its course is certainly possible.

It is long past time for the world to stand up and show the Government of Myanmar that the days of impunity for their crimes are over. 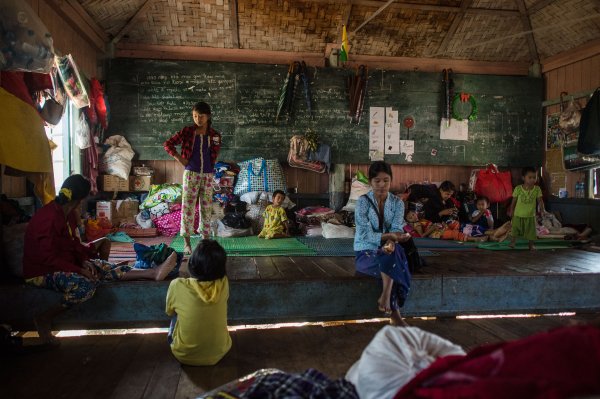