Andy Murray and Fernando Verdasco Are Having a Heated Disagreement Over the U.S. Open Heat Break Rule

Andy Murray of Great Britain returns the ball during his men's singles second round match against Fernando Verdasco of Spain on Day Three of the 2018 US Open at the USTA Billie Jean King National Tennis Center on August 29, 2018 in the Flushing neighborhood of the Queens borough of New York City. (Photo by Julian Finney/Getty Images)
Julian Finney—Getty Images
By Ashley Hoffman

Fernando Verdasco sent Andy Murray home at the 2018 U.S. Open on Wednesday, but not without a clash about the heat rule at the U.S. Open that continued to cause controversy.

The U.K.’s Murray and Spain’s Verdasco faced off in their at Arthur Ashe Stadium in New York City on Wednesday night which saw Verdasco besting Murray in the match 7-5, 2-6, 6-4, 6-4.

It was a scorcher with temperatures closing in on 100 degrees Farenheight, and both players took a beat during the heat break when they were tied in the second round.

Under the new stipulation, players can pause to rehydrate and cool off. But they’re strictly prohibited from speaking with their coaches, something Murray told reporters he witnessed Verdasco doing. Verdasco has denied this.

“[Verdasco] was having an ice bath,” Murray said during his postmatch news conference. “When I came out of the shower, his coach and his…I don’t know if he’s playing doubles with him, but one of the Spanish doubles players….was in there chatting to him, and you’re not allowed to speak to your coach. I went and told the supervisor.”

Murray said he raised the issue with the supervisor. “What are you guys doing? I mean, there’s clear rules here, and you’re allowing this to take place. I don’t get it. They obviously weren’t in there for long, but you got to do better than that. This is one of the biggest events in the world. If you have rules like that, you need to stick with them because one player getting to speak to the coach and the other not is not fair.”

The two tennis greats’ accounts differ. “I know the rule exactly. I didn’t speak anything to any member of my team,” Verdasco said in a post-match conference.

Murray has struggled with an ongoing hip injury, and this marked his return since his last match in 2016. As the tennis star bowed out of the Open, he shared remarks in an Instagram post that worked in a jab at Verdasco. “I’m off to get a health check as apparently I’ve started imagining things #liarliarpantsonfire,” the caption read.

The original version of this story misstated Andy Murray’s birthplace. He is from Scotland, not England. 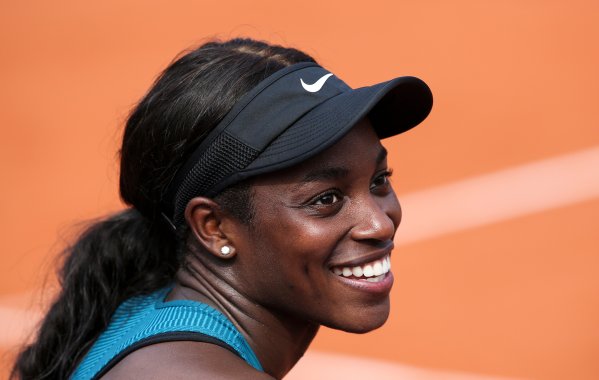 U.S. Open Champion Sloane Stephens Is Set to Defend Her Title—and Defy Her Critics
Next Up: Editor's Pick