A Mother Says Her 19-Month-Old Daughter Died After Being Held by ICE. Now She's Suing for Millions

A Guatemalan mother who says her daughter died weeks after falling ill in a Texas U.S. Immigration and Customs Enforcement (ICE) facility is suing the U.S. government for wrongful death.

Yazmin Juarez, 20, and her 19-month old daughter, Mariee, crossed the Rio Grande into southern Texas in an effort to seek asylum in the United States, according to the claim. The pair were apprehended at the border and temporarily detained at the South Texas Family Residential Center in Dilley, Texas four days later.

According to the claim, Mariee was a healthy, happy child when she arrived in the U.S. When Mariee was first processed by medical personnel at the facility, they noted no health issues before clearing her for custody. Juarez and her daughter were assigned to a single room with five other mothers who each had a child, several of them ill, the claim said. One of the toddlers had a constant cough, runny nose and was “very lethargic.” Juarez was told by one of the mothers that the boy became ill upon arriving at Dilley and was denied medical care.

After Marie’s condition worsened over several weeks, she and Yazmin were transferred from the facility to stay with family in New Jersey. Before leaving, a “licensed vocational nurse” cleared Mariee to leave. But according to the claim, the nurse was not medically qualified to do so.

Mariee spent the final six weeks of her life in a hospital being treated for a respiratory infection. She died on May 10, 2018.

Juarez’ attorney, Stanton Jones, filed a notice of claim Tuesday against the city of Eloy, Arizona, the contractor for the federal government in operating the Dilley detention facility.

“Those responsible for providing safe, sanitary conditions and proper medical care failed this little girl, and it caused her to die a painful death,” Jones said in a statement. “Mariee Juarez entered Dilley a healthy baby girl and 20 days later was discharged a gravely ill child with a life-threatening respiratory infection. We will do everything we can to ensure nothing like this ever happens again.”

Juarez is seeking $40 million in damages in the wrongful death suit.

The statement also included comments from Dr. Benard Dreyer, former president of the American Academy of Pediatrics and a pediatrician at New York University Langone Health, who reviewed Mariee’s medical records from her time at Dilley. He said it was clear ICE medical staff failed to meet the “basic standard of care” and that the medical staff engaged in “troubling practices,” including the use of unsupervised non-physicians to provide pediatric care over a long period of time.

“If signs of persistent and severe illness are present in a young child, the standard of care is to seek emergency care,” Dreyer said. “ICE staff did not seek emergency care for Mariee, nor did they arrange for intravenous antibiotics when Mariee was unable to keep oral antibiotics down. These are just a few of the alarming examples of how ICE medical staff failed to provide proper medical treatment to this little girl.” 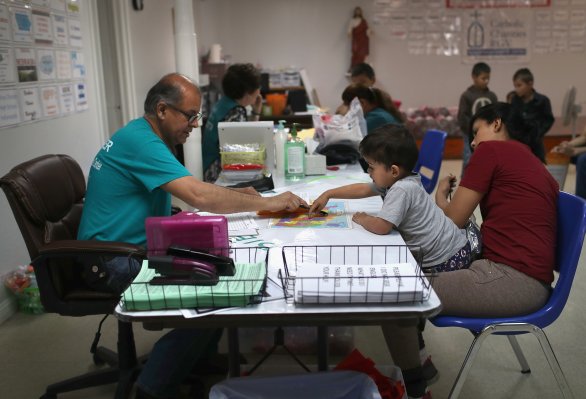 Border Crossers Get a Warm Welcome at Texas Charity
Next Up: Editor's Pick