What the World Can Learn from the Greek Debt Crisis

Greek Prime Minister Alexis Tsipras waves at supporters on Ithaca island, on August 21, 2018.
Menelaos Myrillas—AFP/Getty Images
Ideas
By Ian Bremmer and Leon Levy
Bremmer is a foreign affairs columnist and editor-at-large at TIME. He is the president of Eurasia Group, a political-risk consultancy, and GZERO Media, a company dedicated to providing intelligent and engaging coverage of international affairs. He teaches applied geopolitics at Columbia University’s School of International and Public Affairs and his most recent book is Us vs. Them: The Failure of Globalism.
Levy is an Analyst in Eurasia Group’s Global Macro practice.

On Aug. 21, Greek Prime Minister Alexis Tsipras announced the end of his country’s bailout era from the island of Ithaca, a reference to the successful end of the Odyssey and its hero’s arrival home. Given Greece’s ongoing economic challenges, the more apt mythological analogy would have been Sisyphus rolling an immense boulder up a hill—only for it to roll down when it nears the top.

Ten years and more than $300 billion in rescue loans later, the country has begun its recovery, but Greeks still have an economy that’s 25 percent smaller than it was before the crisis began. Its unemployment rate is the highest in the Eurozone. A third of Greeks now live in poverty or close to it. In terms of length and severity, Greece’s economic slide is comparable to the U.S. Great Depression.

There are lessons here for the rest of the world. Here are some of the biggest.

Austerity politics are dangerous, even if some countries, like Germany, still haven’t gotten the message. Populism is the driving political concern in today’s world, and austerity politics like those championed by policymakers in Berlin add fuel to the fire in two distinct ways. They widen the divide between haves and the have-nots within individual societies, helping to make resentment and fear the driving forces in domestic politics. They also exacerbate inequality among European member states: Germany and Greece have seemingly never been as far apart in terms of quality of life as they are today.

The Greek experience has strengthened the case argued by anti-Brussels governments coming to power across Europe—making compromise on the pan-European level harder than ever. Austerity may be good at balancing bank accounts, but it’s disastrous at shrinking widening inequality of both the economic and political varieties. Europe will continue to pay the price for that miscalculation for years to come.

Relatedly, the failure of austerity politics in Greece has created strange anti-establishment bedfellows. Before there was M5S and Lega in Italy, there was the Syriza-Independent Greeks coalition in Greece. The two were united by little, apart from their opposition to Brussels and the traditional power parties of Greek politics. More than three years on, it has proven a durable political partnership. As the politics of populism continue to swell across the developed world and beyond, the right-left divide of politics gives way to the “Us vs. Them” politics that pits political upstarts against the establishment, with increasingly little concern given to actual policy overlap. When the Syriza-Independent Greeks coalition government formed in 2015 following a bruising round of elections, it was considered an aberration born of unusually difficult circumstances; from the vantage of 2018, it’s looking increasingly as a sign of things to come, heralding a future of increased political paralysis.

Another critical lesson the Greek ordeal has taught the world: In the 21st century, the economic troubles of the present can extend far into the future. While most reports on Greece have understandably focused on the economic misery of the moment, the real tragedy of Greece’s lost decade of economic growth is that it will shortly become a lost generation of economic growth, even if the economy could manage to magically snap back to its pre-crisis levels tomorrow. Nearly 500,000 Greeks have already fled the country in search of better opportunities abroad, and there is little hope of these people returning as they start their careers and families elsewhere.

This is not the first time there’s been a mass migration of Greek workers, but the ones leaving this time around are the most educated and capable individuals that the Greek educational system has produced. Their flight means that Greece’s already-broken pension system will be starved of the country’s most economically productive members, and will exacerbate a looming demographic crunch already in the making as the elderly and the young get left behind. In a globalized world where the movement of people is now easier than ever (and particularly within the European Union), a country’s current economic missteps have the potential to reverberate for years to come.

As Greece continues to claw its way back to financial health, other countries would do well to track Greece’s progress. Nearly 3,000 years on from Homer’s epic poems, the country still has much to teach the world. 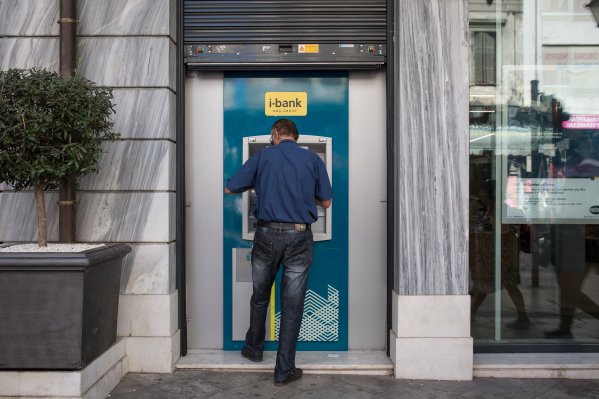 Greece Enters Post-Bailout Era, But Has Little Else to Cheer
Next Up: Editor's Pick