Congress might want to hold off ordering new signage for one of its office buildings.

A proposal to rename the Russell Senate Office Building in honor of Sen. John McCain, who died Saturday, seems to have found its first sticking point. From the floor of the Senate on Tuesday, Majority Leader Mitch McConnell told colleague he was appointing a bipartisan committee to study how to remember their late colleague — and mentioned renaming a conference room or adding a portrait of McCain to a conference room, but not a whole building.

“In order to make sure we realize these intentions, I’d like to put together an official group that can collaborate and bring together ideas from current members, former colleagues and friends. It will be bipartisan — as only befits John’s legacy,” McConnell said. He said it would be called “a gang” rather than a committee, a nod to McCain’s ability to form informal klatches of lawmakers to tackle dicey topics like immigration.

In the indirect way of the Senate, the message was clear: They are not likely to rename a building for McCain, and Republicans are the reason. For all of the outpouring of tributes, many of his GOP colleagues would rather keep the name of a Southern segregationist Democrat on the building rather than risk riling up rank-and-file Republicans who are not universally appreciative of McCain’s self-styled maverick streak.

Among Republicans, his favorability rating stood at 51% — a dramatic lag from the 71% of Democrats who held him in favor, according to a Gallup poll earlier this month. This helps explain why Democratic Leader Chuck Schumer raised the offer of renaming Russell, and why Republicans were slow to embrace that.

McCain’s relationship with his party has always been complicated. He worked with then-Sen. John Kerry, a Democrat and fellow veteran of the Vietnam War, to lay the groundwork for then-President Bill Clinton to normalize relations with Vietnam. He partnered with then-Sen. Russ Feingold on successful legislation to regulate political money and with then-Sen. Ted Kennedy on unsuccessful legislation to overhaul the immigration system; both Feingold and Kennedy were beloved on the left-flank of their Democratic Party.

At the same time, the base of McCain’s Republican Party distrusted him because of these collaborations. McConnell has long opposed McCain’s efforts on campaign cash. The party’s nativist streak has long thought McCain was too weak on immigrants in the country illegally. And some felt the mere fact that McCain challenged then-Gov. George W. Bush for the GOP’s nomination in 2000 showed disrespect for the Republican dynasty.

“John and I stood shoulder to shoulder on some of the most important issues to each of us,” McConnell said on the Senate floor Tuesday, “and we also disagreed entirely on huge subjects that helped define each of our careers.”

In the states, this antipathy toward McCain rings strongly. Even in McCain’s home state of Arizona, the state GOP censured him. “McCain” is an epithet there and in conservative confabs. And some rank-and-file Republicans still fault his decency toward Barack Obama in 2008 as a reason he lost his second White House bid.

So it’s little wonder Republicans have been slow to take up Schumer’s offer to peel “Russell” off the facades of the looming office building with views of the Capitol.

Senate Republicans note that when Teddy Kennedy died in 2009, his former colleagues didn’t rename property for the liberal lion of the Senate. Instead, they put up a portrait of him and his brothers in the Caucus Room and renamed it for the Kennedy brothers. “Are you telling me that John McCain matters more to Democrats than the Kennedys?” a Senate GOP aide said. “This is Chuck Schumer trying to make us hug John McCain, knowing damned well that it will hurt us with our base back home.”

Others in the GOP caucus found different reasons to oppose the move. Sen. Chuck Grassley said he favors a memorial for McCain but added: “I’m not sure that I would make a decision on a specific building at this point.” Sen. Lamar Alexander of Tennessee said lawmakers should not rush with a proposal just yet. Sen. Bill Cassidy of Louisiana suggested there were better ways to honor McCain than renaming the Russell building. Sen. Richard Shelby of Alabama noted that Sen. Richard Russell, of Georgia, was a fellow Southerner who was “well-respected” and “an icon.” (It’s worth remembering Russell’s legacy today is defined by his support of racial segregation and opposition to civil rights protections.) Sen. Jim Inhofe of Oklahoma wondered if Schumer had an “ulterior motive.”

Sen. David Perdue of Georgia said renaming the building would be “premature” and hasty — noting to Politico that McCain hated things moving too quickly or out of what the Senate calls “regular order.” Georgia’s other Senator, Johnny Isakson, said McConnell’s panel should come up with the ideas.

In Washington, if it doesn’t happen quickly and when the public is watching, it seldom gets done. McConnell, a master of this, knows that rule all too well and appears to be slow-walking the renaming of Russell.

That’s why Sen. Bob Corker, a Tennessee Republican who is retiring at the end of this term, noted McCain is popular now. “Who would want to vote against naming a building after somebody who just passed away?”

McCain’s fellow Republicans, apparently. Dragging out the proposed renaming would take some fuel out of the engine and perhaps relegate it to an idea never acted upon. 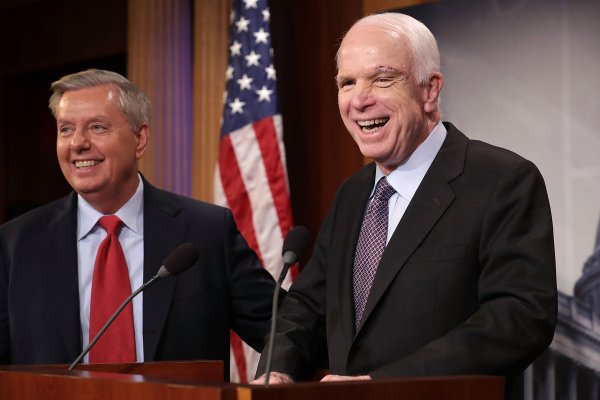 'He Failed a Lot, But He Never Quit'
Next Up: Editor's Pick