In the hall outside his study in our house in Wilmington, Delaware, my father had hung a small framed photograph, a group of old men on a bench wearing baseball caps. I had never asked who they were, but he may have once referred to it as “a reunion.” I didn’t think of my father as someone who attended reunions.

He was a lawyer who loved poetry, history, travel. He read Greek myths to my siblings and me on drives to school, or T.S. Eliot, or the Saint Crispin’s Day speech from Henry V. I was the only child from his second marriage, he was fifty-four when I was born. Older fathers have time. And mine had a wild imagination. We took runs in the evenings, crossing the border from Delaware into Pennsylvania, and he’d pretend we were crossing the border “into enemy territory.” “It’s 1945,” he would insist, a year which meant nothing to me. When we played squash on weekends he often let me win because at least I’d “fought valiantly for fifteen minutes, like the French.” When I asked him once why we didn’t go to church “like everybody else,” his response was, “I prefer Meet the Press.” Then he added, “don’t ever try to be like ‘everybody else.’” But we didn’t go to church because my father didn’t believe in God, though I’d never pressed back on exactly why, what he might have seen or experienced that would have inspired doubt. He was home for dinner every night and it never occurred to me he might have been someone who didn’t want to be home every night, who preferred hostile crossings. And risk. He loved that line in Tennyson’s Ulysses, “follow knowledge like a sinking star,” and that’s what he really wanted to do, what he believed everyone else should do, too.

He referred to my mother as “the national security council,” as in, when asked if he was free for dinner, “Let me check with the national security council.” My mother’s name is Carroll and he talked about life before meeting her as “BC,” a habit which maybe helped solder an idea that he had had no life before her. Though of course he had had one, I had just failed to ask about it. When he turned eighty he offered to take me on a trip, just the two of us, anywhere I wanted to go. I chose Italy since at the time I was thinking of moving there. I was twenty-six.

He had booked rooms at the Villa San Michele, in the hills overlooking Florence. Our dinners on the loggia got later as his afternoon naps stretched from an hour to two, sometimes more. He would look out over the hills and tell me stories about Roman emperors. He loved how Nero had drowned his enemies in a roomful of rose petals. He loved Hadrian and Hadrian’s Villa, outside Rome, which we would later visit and where he would tease about our comparatively small, modern lives, saying “we live like pigs.” He often asked what I wanted to do with my life, but I had no idea then. Your twenties always seemed a time for experimenting. Your twenties were not years for serious things.

We looked at churches in the mornings then swam laps in the hotel’s small pool in the afternoons, since he was adamant about the ritual of exercise. One day we took a helicopter out over the Tuscan archipelago. My father loved helicopters, as do I, maybe for that reason. I could sense the joy he took in each minute of those days, each meal, each new wine or encounter. He loved speaking Italian, arguing about Masaccio or Cimabue or Giotto, the violence of the Palio, and he even endured the very foreign experience of a trip to the Prada outlet, at my request. In Siena, a friend joined us, an Italian publisher. He told us how everyone had always wanted the Pope to write a book but that the Pope had absolutely refused until a journalist convinced His Holiness to enter into an email Q&A, the idea being the journalist would send questions and His Holiness would send answers. As the answers grew longer, evolving from paragraphs to chapters, the journalist realized the Pope was finally writing his book. It became a bestseller.

We ended in Rome, with drinks on the roof of the Hassler and then a walk through the Borghese Gardens, Hadrian’s villa. I was anxious. Maybe it was the fear that something could happen to him on my watch. Or maybe simply the realization that the watch was mine now. I was, as I’ve heard military wives say before husbands deploy, “pre-missing,” anticipating the loss before it occurs. When we got home I asked my father if he would do a Q&A with me, like the journalist and the Pope. I was starting to realize that there was very little I knew about him. We started strong, but then I got lazy, life felt busy, I stopped writing. I told myself I would get back to it when things got quiet. But things never get quiet. Or maybe it was something else. Maybe to acknowledge the time pressure to answer those questions was to acknowledge there was not much time left. A year later, after September 11th, 2001, my father was totally focused on the “first responders,” the special forces officers who went into Afghanistan “first,” the unimaginable risk of that. I remember it was then that he first told me the story of “Jimmy” Doolittle, the Lieutenant Colonel who planned the “Doolittle raid,” the U.S. military’s initial response to the Japanese bombing Pearl Harbor. I had never heard of Doolittle. He described how the pilots took off “without escorts.” When I asked what that meant he said, “it was a suicide mission.” They knew they would be shot down.

My father served in World War II. He wrote hundreds of letters home, primarily to his mother. “So far, I believe I am going to like my new job tremendously,” he wrote in one, “all of it is outdoors, and not unlike my Western experiences. Couldn’t help remembering the days when my idea of a perfect life was to ride through the hills packing a .45 and carrying a carbine, and now I’m paid to do it.” What he really wanted was to be a cowboy, not a lawyer, not even Emperor Hadrian. And he had been a cowboy once, I now knew, and had loved it, then had let that all go. At a dinner just before he died a diplomat who’d spent time in Asia asked my father, “Ned, were you OSS?” and he answered, “Oh no,” then abruptly changed the subject. After dinner that diplomat took me aside and said, “Well, that settles it.”

Two days after he died, a few days before Christmas in 2008, the former Director of the FBI, a family friend, came to the house in Wilmington. He handed my mother a newly declassified Bronze Star citation. It started like this:

For meritorious achievement in connection with military operations against an armed enemy and behind Japanese lines, Captain Edmund N. Carpenter II, while serving with the Air Ground Aid Section (AGAS)-a military intelligence/special operations unit based in the China Theater which had the mission to rescue American fliers shot down behind enemy lines, distinguished himself by his actions in March, 1945 in Indo-China which resulted in the successful rescue of six U.S. Naval aviators. Upon receiving intelligence that French Foreign Legion units, in heavy combat and surrounded by Japanese forces at Dien Bien Phu, were protecting the navy fliers, Capt. Carpenter volunteered to lead a solo mission to recover the fliers. He flew in an unarmed DC-3 from Kunming, China, through Japanese-controlled air space into Indo-China to the French defensive positions at Dien Bien Phu (“DBP”).

And then he explained. My father had been part of the mission to rescue these fliers known as the Doolittle pilots. A team was assembled to parachute behind enemy lines, find the surviving pilots, and bring them home. French foreign legion units in Dien Bien Phu, what was then Indochina, later Vietnam, were protecting the pilots but were under heavy Japanese fire. When my father landed, one of the wounded legionnaires told him where the pilots were. He found them and then radioed for help. A plane arrived and delivered them safely back to Kunming. Two days later, Dien Bien Phu fell. I did the math, in 1945 he was twenty-four.

I read that citation many times in the months after he died and thought of Florence and the helicopter flying low over Elba. I thought of the Tennyson poem and about a million other things he had said or taught me through the years, all little clues to who he was. I realized I would not only miss the father I knew but also a man I had never known, but would spend the rest of my life trying to understand. The photograph is still there, outside his study. It was taken at a “reunion,” of the surviving Doolittle raider pilots. 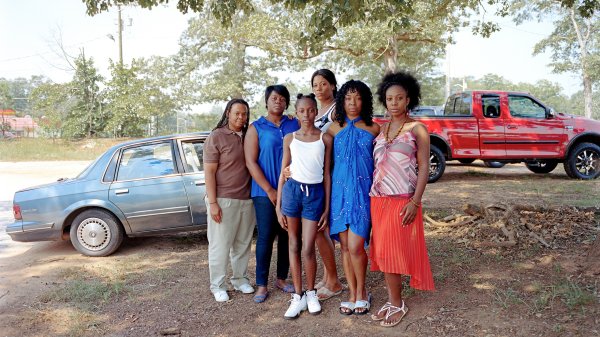 How the South Memorializes — and Forgets — Its History of Lynching
Next Up: Editor's Pick