Sen. Tim Kaine: What John McCain Taught Me About Governing, Losing and Life

Ideas
By Tim Kaine
Kaine serves as a U.S. Senator for Virginia.

A few hours before John McCain died, I stood on the stage of the Lee Theatre in Pennington Gap, Va., to rally Appalachian Democrats for the 2018 mid-term elections. After a warmup by a local bluegrass band, I told the story of John walking into the Senate Chamber in the middle of the night in July 2017, fresh out of the hospital after being diagnosed with glioblastoma, and casting a pivotal vote so that millions of Americans wouldn’t have their health care taken away. The audience was filled with the families and friends of coal miners who worry every day about health care. As I mentioned John McCain’s name, the crowd of rock-solid Democrats in the “Fighting Ninth” congressional district — a name earned by how loyal folks there are to their own party — spontaneously stood and applauded the American hero whose vote had helped save the lives of people they know and love.

I came to the Senate in 2013, knowing John McCain the legend, but not John McCain the man. I sought assignment to the Senate Armed Services Committee, where he had served for decades. He has been my colleague and Chair. We traveled together to Afghanistan, Israel, Saudi Arabia and elsewhere. He taught me a lot, and I am stunned that we won’t have him in the Senate anymore.

We all have McCain stories.

In my first months on the Committee, I unknowingly walked into a firefight with him over a pet peeve of his: cost overruns on the Ford-class aircraft carrier program. We build the carriers in Virginia, and he is a bear on cost overruns. When he didn’t like the tack I was taking on a line of questioning about why costs were high, he interrupted me, and the fight was on. I hadn’t been warned that it was a hot button with him, and my Irish temper came up as fast as his Scottish penny-pinching. We locked into a back-and-forth, with witnesses, trying to prove our points. After the hearing, I was worried that I had offended him — a first-year Senator battling with a Senate lion. But he clapped me on the back, and it was clear he loved it. McCain famously used to say, “A fight not joined is a fight not enjoyed.”

When my oldest son graduated from the Basic School at Quantico, in front of a packed crowd of proud Marine parents, the emcee introduced dignitaries and told the assembled crowd that, “Senator John McCain is here tonight.” The crowd applauded, and we all craned our necks to see where he was. My wife and I wondered why he had chosen to come to this particular graduation. Later, I realized that John wasn’t there. The Marine emcee had mistaken Senator McCain for Senator Kaine. When I saw him the next day, I told him the story, and he instantly responded, “I never knew a Marine who could spell.”

John was so many things but I will always remember him as a man who knew how the Senate should work and was bound and determined to make it function as best as he could. The annual writing of the defense bill is my favorite part of the Senate. We have hearings for two months, in which we listen to our military leaders and outside experts about our needs, capacities and challenges. Senator McCain and Senator Jack Reed, respectively our chair and ranking member, who endlessly battled about the virtues and demerits of Annapolis and West Point, put together a proposed bill with our dedicated staff. Then the 27 members of the Committee sit around a conference table and offer amendments until each member has proposed every item they want and no one has another issue to offer. For hours at a time: Democrat and Republican, an amendment offered, a debate and questions, then a final vote. Everyone is heard; no one is shut out. And when there is nothing more to offer, we vote on a final package. This year, with John absent physically but present in calls, notes and staff cajoling, we overwhelmingly passed the bill out of Committee. Both Houses — Democrats and Republicans — named the bill in John’s honor.

I will be reminded of John every day. I moved into his longtime Senate office in 2015. He had occupied it for more than 20 years, and there was only one office he liked better: Senator John Kerry’s, just around the corner in the Russell building. When Kerry became Secretary of State, McCain decided to switch offices, and I jumped at the chance to move into the space that McCain inhabited for so long.

And I will remember what he told me. The first colleague to seek me out after I returned to the Senate a few days after the November 2016 election was John McCain. He came up to me and said, “Tim, there is only one person in the Senate who knows just how you feel. You and I are the only ones who have been on a national ticket and lost. And my advice to you is just get right back to work.”

You’re right, John. After a painful loss, it is good to get back to work. And that’s how I’ll feel when I cross the threshold into your old office on Monday. 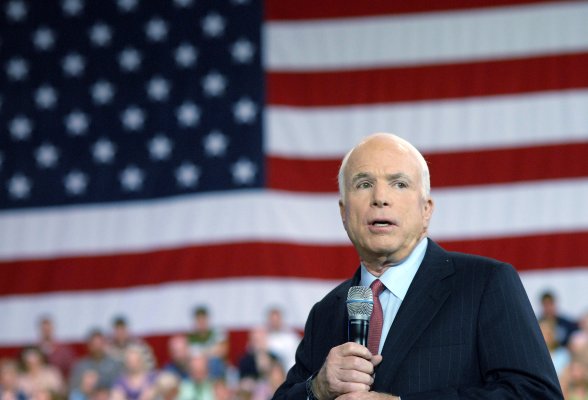 What We Know About John McCain's Funeral Services
Next Up: Editor's Pick