“My Life has many Misfortunes,” wrote French philosopher Michel de Montaigne in the 16th century, “most of which never happened.” Not coincidentally, Montaigne is also considered the father of the personal essay, which has these 500 years later begotten a populous line of literature: the parenting memoir in which nothing terribly bad happens.

The newest arrival in this family is Kim Brooks’ Small Animals: Parenting in the Age of Fear. The misfortune that befell Brooks was that when she left her 4-year-old son in a perfectly safe and cool car to run into Target for less than 10 minutes, someone reported it to the police, and a warrant was put out for her arrest. Nasty, but not life-threatening. She wrote an essay in 2014 that went viral about how impossibly judgy parenting has become, and received, for her troubles, a whole lot more judgment.

Small Animals attempts to assess how modern American parenthood has become synonymous with fear and has “made people worse, or at least, worse to each other.” Brooks arrives at many possible answers. Perhaps it’s because raising children is a much more intensive and intentional activity now than it has been. Or because the media play up stories of the calamities that parents visit upon children (and readers devour them), so people are more apt to think kids are perpetually in danger. Maybe America’s disavowal of state-sponsored child care is to blame, because it often puts parents, particularly mothers, in an impossible squeeze. No matter which is true, with ever present cameras and social media, what was once a domestic matter is now very public.

The result is that parents live in fear of being shamed–even highly educated, straight, white parents like Brooks, who are afforded the benefit of the doubt in a way low-income and minority parents are not. And it changes how they behave.

It’s all Great Stuff for an essay, with the perfect Montaigne level of narrowly averted misfortune. As a book, however, it’s strangely thin. Brooks seems to lack confidence not just in her (perfectly valid) parenting decisions but also in her own sprightly voice, and she quotes long and tedious passages from experts, friends and social-media acquaintances. Parents, time-poor as they are, have scant need for a book-length recitation of the ways in which child rearing blows.

The confidence that seems to have been shaken out of Brooks and her peers might possibly be restored by KJ Dell’Antonia’s cheerful, practical How to Be a Happier Parent. Dell’Antonia worked the parenting beat for the New York Times while raising four children on a New Hampshire horse farm, which may explain her pragmatic outlook.

She identifies the main challenges of parenting (not including judgment) and deals with each, one at a time: mornings, discipline, chores, sibling fights, screens and so on. She explains why each dilemma is worse today and then offers realistic, often research-backed nuggets on how to reduce the misery. Mornings are better if you get to bed earlier. Chores will get done if you’re consistent and don’t expect to be liked. Being a good parent doesn’t require intervening in every sibling scrap. One of her mantras: “You don’t have to go in there.” None of her ideas is revolutionary, but her cheerful assurance that these issues are surmountable and that parents are up to the task is like a restorative drink of fresh water in a sea of misery. So many parenting memoirs read like an employee whining about the boss; Happier Parent reads like a CEO who rolls up her sleeves and says, “Which problem’s next?”

Americans are not likely to give up judging fellow Americans for their parenting anytime soon. But with a little confidence, you can graciously ignore them. You don’t have to go in there. 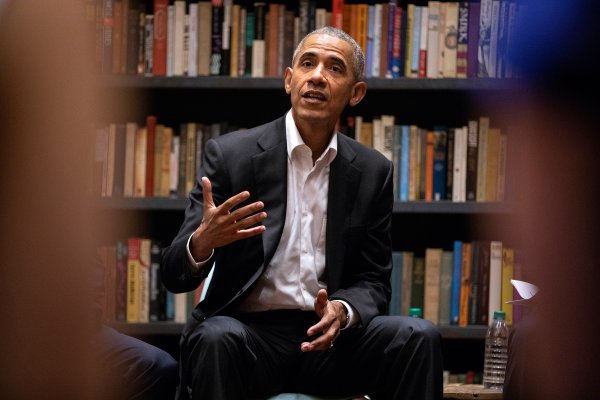 Barack Obama Shares His Five Favorite Books This Summer
Next Up: Editor's Pick