Why Were the Floods in India's Kerala State so Deadly?

Inside a modest, concrete house in a low-lying suburban area in India’s southwestern Kerala state, Rosanna Abrachan thought her family would be safe when the rains began. But then it just kept pouring.

About a week later, with water levels already knee-high, she was told it was time to flee. With her 28-day-old baby in her arms, Abrachan climbed into a rescue canoe and floated off to safety.

“We knew it would rain, like it does every year, but no one thought it would get this bad,” she tells TIME by phone from a relative’s house. “If we weren’t evacuated we would have been stranded.”

More than one million people, like this young mother, were displaced by the devastating floods that swept across the state in early August. At least 445 others have died, mostly due to falling debris, collapsed buildings and lack of food and water. This coastal strip wedged between the Arabian Sea and the Western Ghats mountain chain is prone to inundation, but this year’s unusually heavy monsoon rains brought the worst flooding the state had seen in nearly a century.

Kerala and Tamil Nadu Fire Force personnel carry children on their shoulders through flood waters during a rescue operation in Annamanada village in Thrissur District, in the south Indian state of Kerala, on Aug. 19, 2018.
Manjunath Kiran—AFP/Getty Images

Experts say the extent of the damage and the high death toll could have been mitigated by better water resource management, faster decision-making and a stronger regulatory framework for coastal development. The rainfall was, however, unprecedented, peaking first around July 20 and then returning in full force on Aug. 8. The first 20 days of August saw 164% more rain than normal, according to NASA statistics.

“Kerala was definitely not prepared for a disaster of such magnitude,” says Muralee Thummarakudy, chief of disaster risk reduction at the U.N. Environment Program in Geneva. All told, the floods caused roughly $2.5 billion in losses and damaged tens of thousands of homes in various parts of this state. As the slow work of rehabilitation begins, he says the government would do best not to repeat its mistakes. “There has to be a complete rethinking of land use in Kerala,” he tells TIME. “If we focus only on rebuilding and not smart rebuilding, we’re setting ourselves up for an even bigger disaster.”

People rest at a relief camp in Aluva in Kerala, India on Aug. 22, 2018.
Atul Loke—Getty Images

While such severe flooding had not befallen the state since 1924, officials were well aware that Kerala was at risk. A government-backed report on water management published in June found that the state was among the nation’s worst performers. An earlier report warned that mining and hydropower dams were not only threatening the ‘Ecologically Sensitive Area’ of the mountain range, which is recognized as an UNESCO World Heritage Site, but also making some areas more susceptible to disaster such as floods.

One of the authors of the latter report, ecologist and academic Madhav Gadgil, suggested that the disaster was “man-made,” according to the local news site India Today. As chairman of the Western Ghats Ecology Expert Panel, which produced the report for India’s central government in 2011, Gadgil made a number of bold recommendations that were largely ignored by Kerala state’s authorities and protested by locals who believed they would lose their land and jobs if environmental policies were implemented. Among those recommendations was an immediate moratorium on all hydropower dams being built in the area.

People are airlifted by Navy personnel during a rescue operation at a flooded area in Paravoor near Kochi, in the Indian state of Kerala on Aug. 18, 2018.
AFP/Getty Images

Amidst the torrential downpour last week, Kerala authorities opened the gates of 35 of the state’s 39 dams, which had reached dangerously high water levels. While this was cited as a necessary measure, experts have suggested that the reservoirs should have been drained gradually, and much sooner. In one of the worst-affected areas, Idukki district, water released from a nearby dam ravaged homes and businesses. Kerala state authorities declined to comment, citing the ongoing crisis.

“The rainfall was unusually high but if the dams were operated properly, the scale of the disaster could have been much less,” says Himanshu Thakkar, a water activist and coordinator at South Asia Network of Dams, Rivers and People, an informal network that works on issues related to water usage and water reservoirs. “The dams shouldn’t have been full in the first place.”

Read more: How India’s Conservationists Are Fighting to Save Half of the World’s Tigers

Known around the world for its paradisal beaches, swaying coconut palms and picturesque tea plantations, Kerala is also a popular tourist destination. Tourism accounts for roughly 10% of GDP in the state home to almost 35 million people. Dr. Parthasarathi Mukhopadhyay, a scientist at the Indian Institute of Tropical Meteorology, said that precisely because of its idyllic location, tucked away between the sea and landslide-prone hills, Kerala is one of the most vulnerable parts of India’s coastline and care must be taken to prevent future catastrophes.

“I wouldn’t call this a man-made disaster, but a lot of factors contributed to it,” Mukhopadhyay said. “The bottom line is that… if we don’t pay heed to the reports coming out regarding Kerala’s fragile ecology, we are putting the people of this state at risk.” 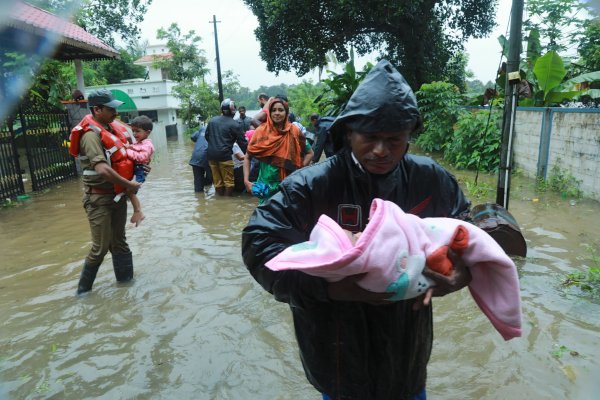 Devastating Floods in Kerala Kill at Least 164
Next Up: Editor's Pick