Saturday marks the first anniversary of one of the darkest events in Myanmar’s recent history: Aug. 25, the beginning of a military campaign of extrajudicial killings, sexual violence, and arson that drove more than 700,000 Rohingya Muslims from the country’s western Rakhine state. Top diplomats and U.N. officials have labeled the military’s crusade as ethnic cleansing and some have likened it to genocide.

Aung San Suu Kyi, the Nobel laureate who leads Myanmar’s civilian government, has repeatedly denied abuses in Rakhine and this week used a rare public address in Singapore to blame the crisis on Rohingya “terrorist activities.”

Her dispassion is unsurprising: the Rohingya face widespread hostility in Myanmar, where they are perceived as illegal interlopers from Bangladesh. In recent years, the maligned minority has been stripped of citizenship and voting rights; they have been denied freedom of movement, access to basic services, and are targeted by sporadic waves of violence.

Some 140,000 Rohingya remain interred in displacement camps in Rakhine, since they were expelled from the state capital Sittwe in 2012 in the aftermath of sectarian riots that claimed nearly 100 lives.

To many observers, the vigor of the military’s most recent campaign betrayed a wish to drive the Rohingya out of the country once and for all.

Human rights advocates are calling for Myanmar’s generals to face prosecution at the International Criminal Court (ICC). But for the Rohingya, the crisis is far from over: over 1 million refugees now languish in sprawling refugee camps in neighboring Bangladesh with no guarantee of a safe return to Myanmar.

Rohingya Muslim refugees disembark from a boat on the Bangladeshi side of Naf river in Teknaf on Sept. 13, 2017.
NurPhoto/Getty Images

What happened in August?

The assault was the second by the self-declared Arakan Rohingya Salvation Army (ARSA). In October 2016, ARSA, then known as Harakah al-Yaqin, killed nine police officers in an attack on border posts. Myanmar’s military, known as the Tatmadaw, responded with so-called “clearance operations” that were described by the U.N.’s human rights body as “devastating cruelty.” The violent reprisals displaced at least 92,000 Rohingya, who fled with credible reports of murder, rape and torture.

But that episode was just a preview.

In response to the Aug. 25 attacks, the Tatmadaw launched a ferocious counterinsurgency campaign that Rohingya survivors and rights watchdogs say made no effort to distinguish between civilians and insurgents. Villages were pillaged and burned, women and girls gang raped by soldiers, and fleeing civilians executed. At least 6,700 Rohingya were killed in one month, according to Médecins Sans Frontières (MSF), a number the group called both “staggering” and “an underestimation.”

The attacks sparked an unprecedented exodus, with entire Rohingya communities fleeing through the forests and mountain passes, and crossing the Naf River into Bangladesh. In total, more than 700,000 fled Myanmar, many of them carrying relatives too old, ill, or injured to walk.

A report by Bangkok-based Fortify Rights suggested the Myanmar military campaign was premeditated. The report documented military preparations for attacks on the Muslim minority months before ARSA struck, including depriving Rohingya villagers of food, confiscating household items that could be used as weapons, and training and arming local non-Rohingya communities.

An aerial view shows burned down villages once inhabited by the Rohingya seen from the Myanmar military helicopters that carried the U.N. envoys to northern Rakhine state, Myanmar, May 1, 2018.
Michelle Nichols—Reuters

What is the situation now?

For the Rohingya in Bangladesh, the past year has been one of insecurity.

According to the U.N., 919,000 people now reside in camps. The Kutupalong-Balukhali complex, home to over 609,000 people, is the largest refugee camp in the world.

Settlements have expanded over the past year, with schools, medical clinics, mosques, and internal governance attempting to piece communities back together. Refugees now have basics such as food, shelter, and healthcare, representatives of aid organizations working onsite tell TIME. But the perils are manifold, from disease and deprivation to labor and sex trafficking — 77% of recent arrivals are women and children — to illegal methamphetamine trade, which enlists refugees, barred from conventional work, as drug mules.

“The camps are desperately overcrowded and the population is almost entirely reliant on aid,” Fiona MacGregor, spokesperson for the International Organization for Migration (IOM) in Cox’s Bazar wrote to TIME. “Under such conditions, people are very vulnerable to traffickers seeking to exploit them with promises of jobs or other opportunities elsewhere.”

Seasonal monsoons have brought deadly flooding, mud and landslides, as well as risk of diseases. Most structures are made of plastic sheeting and bamboo, and conditions are “far” from meeting minimums for shelter or sanitation, according to International Federation of Red Cross and Red Crescent Societies (IFRC) operations manager Frank Kennedy.

“If we get to the end of this wet weather, without an outbreak of communicable disease, it will be enormous victory,” Kennedy tells TIME from Cox’s Bazar.

More than 24,000 Rohingya have been relocated to safer ground, according to UNHCR, but tens of thousands remain at risk, and a direct hit from a cyclone would be “catastrophic,” Kennedy says. “We are clear: we cannot protect these people where they are.”

A Rohingya refugee woman walks with a child in her lap in Balukhali refugee camp in the Bangladeshi district of Ukhia on Nov. 23, 2017.
MUNIR UZ ZAMAN—AFP/Getty Images

How is the world reacting?

One of the most damning responses has come from the U.N. Special Rapporteur for Human Rights Yanghee Lee, who said the army’s campaign bears “the hallmarks of genocide.” Similarly, the U.N. High Commissioner for Human Rights Zeid Ra’ad Al Hussein called it a “textbook example of ethnic cleansing” that contains “elements of genocide;” he has repeatedly urged the U.N. Security Council to refer Myanmar to the ICC.

Read more: The U.N. Isn’t Ruling Out ‘Elements of Genocide’ in Myanmar. Here’s What That Means

Yet Myanmar has remained staunchly unapologetic, denying allegations of atrocities and clearing its soldiers of wrongdoing in an internal probe last year. Instead, the government has launched a succession of toothless advisory commissions, the latest in July, that critics say are intended to defer responsibility.

Only seven Myanmar soldiers have been disciplined for the entire crackdown, sentenced to 10 years with hard labor for the execution of 10 Rohingya men discovered in a mass grave. Meanwhile, two Reuters reporters who investigated the incident face 14 years in prison for possessing “state secrets.”

What future do the Rohingya face?

International NGOs are calling on Myanmar and Bangladesh to resolve the crisis, but there is no political solution on the horizon.

Humanitarian groups and the Bangladeshi army are digging in to reinforce the camps by improving roads and bridges and laying concrete foundations for meeting halls and women’s shelters. They’re also replanting denuded land to reduce mudslides when next year’s rains arrive.

But the camps won’t be the Rohingya’s home forever. In June, U.N. agencies signed a long-awaited deal to begin repatriating the Rohingya to Myanmar, but rights groups have criticized its terms. As recently as this week, the U.N. complained they were still being blocked from northern Rakhine, as did MSF, which in the past had provided medical services after most international NGOs had been expelled.

Independent investigators and journalists have been barred as well, except on government-chaperoned excursions; a dedicated U.N. Fact-Finding Mission has been denied visas for over a year.

Rights groups warn that without independent monitoring, Rohingya face no guarantees of safety should they return to Rakhine, where as many as 600,000 Rohingya still remain.

Those concerns seemed validated this week when Human Rights Watch reported that six Rohingya who returned to Myanmar last year were arrested, interrogated, and tortured.

Meanwhile, UNICEF warned this week that a “lost generation” of Rohingya children is at risk of growing up in the camps without an education. The Joint Response Plan, a $950 million humanitarian initiative, is only one-third funded.

“The Rohingya refugees stand on the precipice of yet another tragedy,” IOM’s MacGregor says. “More support is desperately needed if another disaster is to be avoided.” 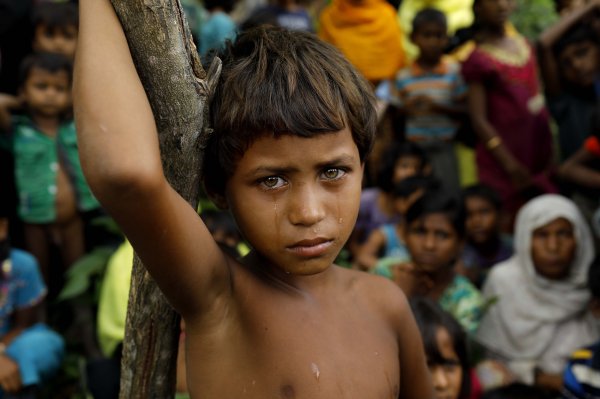 Facebook Is Failing to Curb Hate Speech in Myanmar: Report
Next Up: Editor's Pick