The Crowd Chanted 'Lock Her Up.' President Trump Didn't Mention His Own Team's Legal Troubles

Hours after his former campaign manager and longtime personal lawyer faced moments of reckoning in separate federal courtrooms, President Donald Trump stood at a campaign rally in West Virginia as his supporters chanted “drain the swamp” and “lock her up.”

It was the same day that Trump’s former lawyer, Michael Cohen, pleaded guilty to charges of tax evasion, bank fraud and campaign finance violations and Paul Manafort, Trump’s former campaign chairman, was convicted on eight counts of bank and tax fraud related to his work as a political consultant overseas.

Other than brief remarks on the tarmac that Manafort was a “good man” and that the investigation into his actions was “a disgrace,” Trump had nothing to say about him or Cohen during a long, wide-ranging speech in Charleston Tuesday night.

Instead, he talked about midterm elections, border security, nuclear weapons, social media “censorship,” protests by NFL players and the proposed Space Force. He riffed on his mother’s turkey and his “many much more beautiful homes.”

At one point, Trump lamented the “Russian witch hunt,” echoing comments he made to reporters earlier Tuesday, when he called the Manafort verdict “a very sad thing” and said it “has nothing to do with Russian collusion.”

“There is no allegation of any wrongdoing against the President in the government’s charges against Mr. Cohen,” Giuliani said in a statement Tuesday. “It is clear that, as the prosecutor noted, Mr. Cohen’s actions reflect a pattern of lies and dishonesty over a significant period of time.” 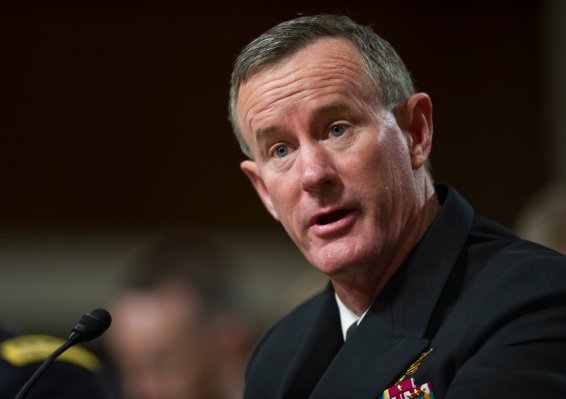 Adm. McRaven Tells Trump to Revoke His Security Clearance
Next Up: Editor's Pick