During Monday night’s 2018 MTV Video Music Awards in New York, just before presenting the Video of the Year Award, Madonna shared a lengthy anecdote about her start as a pop star, her struggle to find her place in show business and the debt she owed to Aretha Franklin, who passed away on Aug. 16.

In response, many critiqued Madonna’s approach to Franklin’s legacy, suggesting she had centered her own experience over that of Franklin’s achievements.

So on Tuesday, Madonna took to social media to clarify her intentions with her speech on the Radio City Music Hall stage, putting up an Instagram post that featured a selfie photo of her and Video of the Year winner Camila Cabello and making a pointed statement that her speech was not supposed to be a “tribute.”

“And just to clarify,” Madonna wrote in the accompanying caption, “I was asked to present video of the year by MTV! And then they asked me to share any anecdotes I had in my career connected to Aretha Franklin!” She continued:

The VMAs also featured performances from Jennifer Lopez, Nicki Minaj, Shawn Mendes, Ariana Grande and more, although many of music’s heavy-hitters — including Beyoncé and Jay-Z, Taylor Swift, Kendrick Lamar, The Weeknd, Bruno Mars and more — refrained from attending this year’s festivities. Madonna herself, who just celebrated her 60th birthday last week, has an illustrious history across the decades at the VMAs, winning the Video of the Year award back in 1998 for “Ray of Light.” 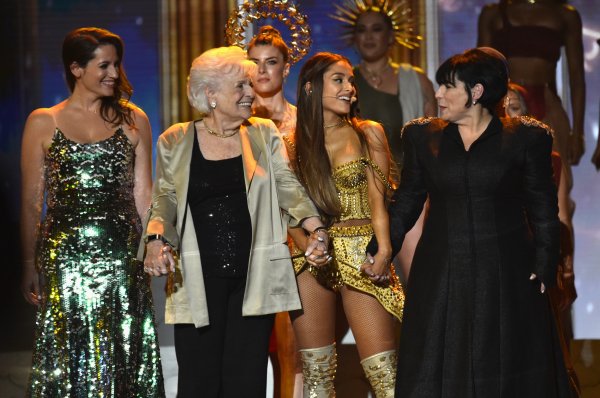 How Ariana Grande Turned Her VMAs Song Into a Family Affair
Next Up: Editor's Pick