President Barack Obama moved Tuesday to close the pay gap between male and female federal contract employees who do the same job, his latest play on the issue ahead of the midterm elections.

Obama signed two executive orders amid the Democrats’ focus on income inequality and specifically pay inequity for women in 2014. The new orders—which coincided with a fresh push to pass the Paycheck Fairness Act that has foundered twice in Congress but is set for another vote this week—forbid federal contractors from punishing workers who discuss salaries, and also require contractors to disclose more data about their wages.

“Pay secrecy fosters discrimination, and we should not tolerate it, in federal contracting or anywhere else,” Obama said at the White House, on a day activists have dubbed Equal Pay Day. Obama said the orders are designed to increase transparency in the workplace, but Republican critics are dismissing them as political pandering aimed at galvanizing female support for the midterm elections.

“Even though we know that when economists control for any number of important factors—such as college major, work experience, time spent out of the workplace—the pay gap shrinks to almost nothing, the president, Democratic lawmakers, and progressive activists continue to use this faulty statistic—and this faux holiday—to justify growing government in the name of protecting women,” Sabrina Schaeffer, who heads the Independent Women’s Forum, said in a statement. “That’s why it’s fitting that Senate Democrats have chosen this occasion to push the ‘Paycheck Fairness Act,; which is also misleadingly named, since it will do nothing to promote fairness and certainly won’t help more women get a paycheck.”

Obama was introduced by Lilly Ledbetter, the worker who sued for back wages after she found out her employer had paid her male colleagues more for doing the same job. Ledbetter, the namesake of a 2009 pay equity law, only found out about the wage disparity because of an anonymous note, and only after the statute of limitations for her to sue for backpay had lapsed. Obama said there needs to be more transparency so that women know whether or not they’re getting a fair deal.

“Some commentators are out there saying the pay gap doesn’t exist,” he said. “They say it’s a myth. But it’s not a myth, it’s math. I mean, Lily Ledbetter didn’t just make this up.”

Republicans say the wage gap is a trumped-up issue Democrats are using to bolster female support for the midterm elections. Some have criticized Obama as hypocritical after a conservative think tank study found that female White House staffers make 12% less than their male colleagues—a figure better than 77% national average but still one being seized upon.

“What I can tell you is that we have as an institution here have aggressively addressed this challenge, and obviously, though, at the 88 cents that you cite, that is not a hundred, but it is better than the national average,” White House Press Secretary Jay Carney said Monday. 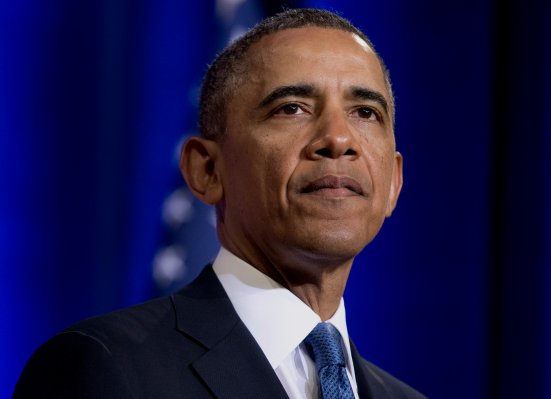 Obama Acts on Equal Pay
Next Up: Editor's Pick