World News Tonight's David Muir Wants to Earn Your Trust, One Broadcast at a Time

On ABC’s World News Tonight with David Muir, the nation’s best-liked anchorman could well be made of pixels, so effectively does the newscast approximate the digital vibrancy of a computer screen. But put the man on a New York City street at midday and his corporeal reality is affirmed by a steady stream of strangers, mostly women and mostly of a certain age.

“If I were younger …” says a grinning pedestrian approaching Muir at the corner of Central Park West and 66th Street, where he has arrived to have his photo taken for TIME.

“He’s even more handsome in person,” another calls out.

Television does not lack for measures of popularity, and the summer of 2018 finds Muir perched atop a bunch of them. According to Nielsen, World News has often drawn more viewers than any other nightly newscast, winning last season and topping the ratings for 26 straight weeks this year. Q Scores, a company that measures “emotional connection” with consumers, places Muir ahead of other big names in the world of TV news and information.

That makes the 70th anniversary of ABC’s nightly newscast a bit sweeter, and perhaps a bit more relevant. In an era when most news on television is something that’s already known and just being chewed over, there’s something reassuring in finding that the largest audience of the day chooses a program dedicated to simply presenting it. Muir embraces what, seven decades on, counts as a tradition.

“I was the kid who would excuse myself from the backyard and go in and watch Peter Jennings,” he says of his childhood in Syracuse, N.Y. “I was drawn to him. And I don’t think at 12 or 13 you can put into words why you’re drawn to a particular journalist, but Peter’s curiosity was infectious. He seemed to be the one who was having a conversation with America every night.”

Muir gives it a beat. “I think now, in the age that we’re in, it’s more of a two-way conversation.”

The anchor, 44, has been sitting in Jennings’ old chair for nearly four years now. On a wall in his office, sunlit by the giant window that vibrates with the noise of a construction site across the street, is the American flag that flew over the U.S. Capitol the day of his first broadcast, Labor Day 2014. Next to it is a blowup of a photograph Muir took of a taxi door in Cairo during the Arab Spring. And beside that is a group photo from Somalia, where he came under fire while reporting on famine. Then there’s a shot from Hurricane Katrina.

Muir raised himself to the position of anchor by reading the news from a cardboard box in his living room, then from behind desks at local stations in Syracuse and Boston before ABC hired him in 2003. But he likes to be out in the world, “globetrotting” like Jennings. In his phone Muir keeps photos of a Syrian boy, Rami, whom he had reported on in Beirut. When Muir returned a few years later, he spent an entire afternoon tracking Rami down. If one of the pleasures of foreign reporting is going to new places, another is returning to a place you’ve been before.

“My biggest challenge is that people do actually expect you to be there at 6:30, Monday through Friday, at that desk,” Muir says. “So in order to carve out some of the reporting that fuels me, that generally means squeezing in a weekend here or there where I can take off and pick up a story and get back in time for Monday’s broadcast.” These days, it’s possible to take the show on the road with just three other people. But you can’t do that lightly. Anchoring from the scene of a breaking story changes the perception of that story. And perception is something the wise news outlet gauges carefully and constantly.

“I think that in this era, where people are really hungry for someone that they can trust and a team they can trust, that it’s just something they sense in their gut,” Muir says. “And we go out there and try to earn that trust every single night. And we’re not perfect. One of the great gifts of this job is that you can go out the next night and give it your best shot again. But we never forget that we’re reporting to a divided country.”

The challenge, he says, when “half the country is saying give the guy a break and the other half of the country is still saying how on earth could this happen and how much longer will it last,” is to hear both sides without being identified with either. “We do this balancing act every night of trying to signal to an audience we hear you, we’re asking questions for you.”

The tricky part, especially with Donald Trump, is how often the questions are critical. Muir got the first TV interview with Trump in the White House and made news by challenging the new President’s contention that a think-tank study found widespread voter fraud. “Take a look at the Pew reports,” Trump said. “I called the author of the Pew report last night,” Muir answered. “And he told me that they found no evidence of voter fraud.”

“Really?” Trump said, visibly taken aback. “Then why did he write the report?”

Before mainstream media became an epithet, nightly newscasts helped define the nation that gathered to watch them. Muir senses that they still can, judging by the reaction to segments of his show like “America Strong.”

“It basically just puts a spotlight on ordinary people doing extraordinary things,” he says. “And I can’t tell you how often I hear from people who say that moment is for them right now the most important part of the newscast. And I think what it means is that they’re hearing us at the end of the news essentially say, You know, we’re all in this together, and we’ll tackle it again tomorrow. And there’s actually quite a bit that unites us still in this country.”

Muir still reads newspapers. On a Tuesday in early August, the New York Times is spread out on his glass-topped desk and others are stacked on the carpet below. He starts his day with a call from the show’s executive producer. Then he hits the gym before riding the subway from his West Village home to ABC Studios on the Upper West Side, located on a block dubbed Peter Jennings Way. When Muir landed his first job at ABC, he was photographed leaning against a bus stop with an ad featuring Jennings. Now it’s his own picture in the lobby. “It’s a weird thing to walk by it,” he says.

Since Trump entered politics, the news has been especially difficult to predict. The top story is apt to change minutes before broadcast, which may account for Muir’s coiled-spring position at his desk. And the day that officially starts at about 10:30 a.m. doesn’t end with the broadcast. There’s an in-house critique and a rough plan laid out for the next day. Sometimes even that’s not the end.

“I often clean out my inbox on the way home,” Muir says, “and one night I looked up, and there’s a gentleman who says, ‘Are you?’ And I said, ‘Well, yeah,’ and he said, ‘Well, what happened today?’ So I found myself doing the newscast all over again on the subway.” 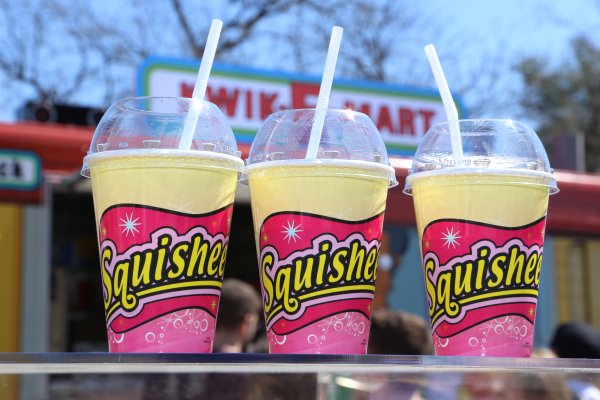 'The Simpsons' Kwik-E-Mart Store Has Opened in Real Life
Next Up: Editor's Pick