Turkey’s Erdogan Is in a No-Win Situation With Washington

People are reflected on the street as they pass a currency exchange office on August 13, 2018 in Istanbul, Turkey. The lira hit another record low overnight forcing Turkey's Central Bank to act to curb the lira's collapse, however the action was not enough to subdue investors fears over the countries financial crisis.
Chris McGrath—Getty Images
By Ian Bremmer

Recep Tayyip Erdogan is having a very bad August. Turkey’s President finds himself locked in a confrontation with a belligerent Donald Trump, and the U.S. President has again shown himself willing to use economic weapons that can inflict real pain. In response to a diplomatic standoff over a U.S. citizen detained in Turkey, the U.S. Treasury Department sanctioned Turkey’s Justice and Interior ministers. Trump then announced plans to impose 20% tariffs on Turkey’s aluminum and 50% on its steel. In response, the lira lost nearly one-third of its value in three days. Turkish equity markets fell 17% on fears that Turkish companies won’t be able to pay debt denominated in euros or dollars.

Turkey’s economy is in deep trouble, but the broader problem has less to do with Trump’s sanctions and tariffs than with Erdogan’s economic mismanagement. He has repeatedly intervened to prevent Turkey’s central bank from raising interest rates, because he fears a reduction in the money supply will slow growth and damage his popularity. Rate hikes are needed, because inflation climbed to nearly 16% in July, three times the central bank target. The value of the lira was already at historic lows against the dollar even before sanctions. And Erdogan’s decision to name his son-in-law as Finance Minister hasn’t exactly cheered investors.

These missteps left Turkey’s economy vulnerable. All Trump had to do was provide a shock to set the dominoes tumbling.

Why is all this happening? Trump has demanded that Turkey release Andrew Brunson, a U.S. evangelical pastor who has been held in Turkey for the past two years. Turkish prosecutors say Brunson has ties to the Kurdistan Workers’ Party, which the Turkish government considers a terrorist group, and that Brunson aided the planners of the failed coup against Erdogan in 2016. The U.S. government says Brunson is innocent and wants him to come home.

Trump reportedly believed Erdogan agreed in July to a prisoner swap: he would ask Israel to release a Turkish national accused of spying, in exchange for Brunson. Israel released the Turkish prisoner, but Erdogan, who denies that was the deal, ordered only that Brunson be moved from prison to house arrest. An infuriated Trump responded by unleashing the sanctions and tariffs.

Whatever the deal was or wasn’t, Turkey’s economy is suffering for it. So far, Erdogan has responded with angry threats and trademark conspiracy theories. He has ordered that assets of the U.S. Justice and Interior ministers be frozen, though it’s unclear how much U.S. Attorney General Jeff Sessions and Interior Secretary Ryan Zinke might have invested in Turkey. He has put his own tariffs on U.S. imports of cars, tobacco and alcoholic drinks.

For Erdogan’s next move, it’s instructive to look back at his confrontation with Russia’s Vladimir Putin just over two years ago. After Turkey shot down a Russian warplane it said had strayed into Turkish airspace, Erdogan staged a show of defiance against Putin’s threats. But when Russia imposed sanctions on Turkey’s tourism, construction and food sectors, Erdogan quickly backed down. He’ll eventually have to do the same with Trump, who, like Putin, has all the leverage. Someday, Erdogan will learn to avoid unwinnable fights.

If Turkey’s economy is to recover, Erdogan must do more than solve the Trump problem. Conspiracy theories and threats may help win elections, but they don’t convince investors that your economy stands on solid ground. 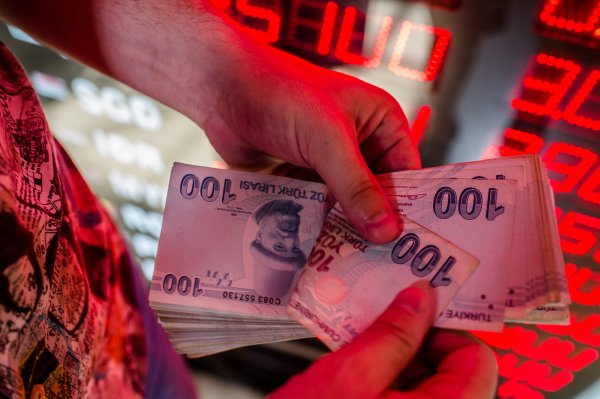 U.S. Says Tariffs to Stay as Qatar Aids Turkey
Next Up: Editor's Pick