3 Essential Books for Women Who’d Rather Go It Alone

In 1936, a woman named Marjorie Hillis wrote a book, a best seller in its time and republished in 2005, called Live Alone and Like It, a guide for the woman who, for whatever reason, finds herself going solo. Hillis, a career woman who did end up marrying, wasn’t saying that single life was for everyone. “But,” she wrote, “the chances are that at some time in your life, possibly only now and then between husbands, you will find yourself settling down to a solitary existence.”

The idea of a woman living on her own may have been more of a novelty in 1936 than it is today. Yet even in 2018, a woman who isn’t married by a certain age or who has chosen not to have children–or who, perhaps, has been unable to conceive and has decided to channel her energy elsewhere–is still an object of some curiosity. Even today, the assumption isn’t necessarily that she made a choice; often, it’s that she was somehow left behind.

But the dirty little secret of women who live on their own, whether they’re between partners or simply choose not to have one, is that … it’s kind of awesome. We all like to think we’re in control of our lives. But sometimes the life you’re supposed to live chooses you, and it’s for the best in ways you can’t foresee: children don’t arrive as you thought they would, but your career takes a shape you couldn’t have imagined. A broken marriage or love affair or the death of a spouse leaves you in despair, even as it opens a space for a self you didn’t know you could grow to be. One life can contain so many selves: we never know in advance which ones we’ll end up with, so it’s best to be prepared for anything. In one way or another, three of this summer’s books tackle the idea of living life on your own terms, even when deciding what those terms are seems daunting. The footnote that comes attached to all this self-knowledge is that no one ever said it would be easy.

Loneliness always feels bad, but solitude often feels good, and if there is a little of one in the other, the balance can be its own source of sustenance. That’s something Stephanie Rosenbloom captures in her evocative, observant new book, Alone Time: Four Seasons, Four Cities, and the Pleasures of Solitude, which was published in June and is really about being alone–though that is, after all, much of what living alone means. Rosenbloom, a New York Times travel columnist, recounts her experiences as a solo wanderer in Paris, Istanbul, Florence and her hometown of New York City, capturing the joy of making a plan and having the freedom not to stick to it.

She also tackles the great bugaboo of so many people: eating alone in public. In her view, it’s an invitation to savor all that’s before you, whether that’s food or a street view or both. She also notes that for women, eating alone is a fairly recent hard-won right (and is still unacceptable in certain cultures), so they should flex it. Rosenbloom recounts snooty joints that were disappointing and modest ones that brought delight, and she doesn’t scoff at McDonald’s: “You can learn a thing or two about a city by observing the goings-on there.” When she turns up at the one on the Champs-Élysées, she notices the invitation–Savourez–printed on her Filet-O-Fish container. “And I did.”

Because being alone so often involves pushing outside yourself, it’s less a way of retreating from the world than an invocation to join it in a more meaningful way. Glynnis MacNicol’s thoughtful memoir No One Tells You This is an account of her 41st year, one of those soul-shattering epochs we all have, when too much hits at once. By the time MacNicol turned 40, she had launched a solid writing career in New York City and co-founded a networking platform for women, The Li.st. Just as she might have been figuring out some of her own personal, approaching-middle-age issues, everyone around her suddenly needed her: her sister, already the mother of two, was about to give birth–and had just split from her husband. Their mother was suffering the devastating effects of Parkinson’s disease. MacNicol’s network of friends in New York needed her too. She tells a harrowing story of accompanying one friend to the hospital, where the woman gave birth to a stillborn baby. How do you walk a friend through a time when yesterday there was a baby and today there is not? Especially as a 40ish woman trying to decide whether you want to be a mother yourself.

No One Tells You This is the story of how MacNicol made peace with her decision to forge ahead on her own, without children–though “making peace” is a misnomer, because these choices are anything but peaceful. And MacNicol knows that a choice isn’t an ending; it’s just another door to “What next?” How, she asks, does “one commit to the idea of not committing? Or was this it? A rolling interrogation of myself. Living in a constant state of reinvention.”

Along with books like Rebecca Traister’s All the Single Ladies and Kate Bolick’s Spinster: Making a Life of One’s Own, MacNicol’s No One Tells You This is part of a trend in recent years of examinations of the possibilities that are now open to women, who have more freedom than ever before. But most of these books have been written by women in their 30s and 40s. What do women 50 and over, who made similar choices years ago, have to say about the experience? I have my own answer: the great and terrible thing about being young is that there are so many possibilities. As you age, the possibilities drain away. That’s depressing in some ways, but it’s also a relief–there’s so much less to want. And the reality is that living alone–like living any life–is often ridiculous. Stupid stuff, sometimes terrible stuff, happens. How you deal with it says a lot about you.

TAKE THE TIME Parker Posey’s pants fell down as she was walking on Fifth Avenue. They were harem pants, and Posey–the actor who made her name in ’90s indie hits like Party Girl, and who now appears as Dr. Smith on Netflix’s Lost in Space–hadn’t tied them on tightly enough. As she recounts in her gloriously woolly memoir You’re on an Airplane, Posey tried to turn the event into street comedy, hoping to enlist “a stranger to help my shame” and share a laugh. “My pants fell down,” she said to a woman passing by, a stylish-looking lady in her 80s. The woman grimaced and walked away, fast.

“When I’m asked, ‘What’s it like being an actress?’ I always say, ‘It’s like walking around with your pants down and around your ankles,'” Posey writes, though you don’t have to be an actor to share that feeling. Posey has a lot to say in You’re on an Airplane–she jumps from one idea to the next like a hamster exploring a new activity palace. Her style may seem dotty, but it’s actually searingly direct. She tackles personal challenges that must have been painful–like having to sell an apartment she couldn’t afford, followed by a move into a more cost-efficient rental–but still manages to find some loopy joy in the experience.

Posey does not have children, but she does have a bichon-frise-poodle-Maltese mix, Gracie, whom she loves dearly. She writes about what it’s like to be an actor “of a certain age,” when the roles start to dry up if you’re a woman. She writes, jauntily, about her insecurities–her candor might even make you feel jaunty about your own.

You’re on an Airplane also includes such single-life enhancers as instructions for yoga breathing exercises, a primer on making clay pots (one of Posey’s hobbies) and a few special recipes, including her grandmother Nonnie’s fireball cocktail, which calls for an actual Atomic Fireball candy. The book ends with a Posey flourish: “Cheers to our lineage and being able to live on the planet at this time, and don’t forget that resentment is poison. And good luck with your regrets; they’ll leave you lonely and you can’t dance with them.” In other words, whatever choice you make, there’s dancing on the other side, as long as you leave room for it. 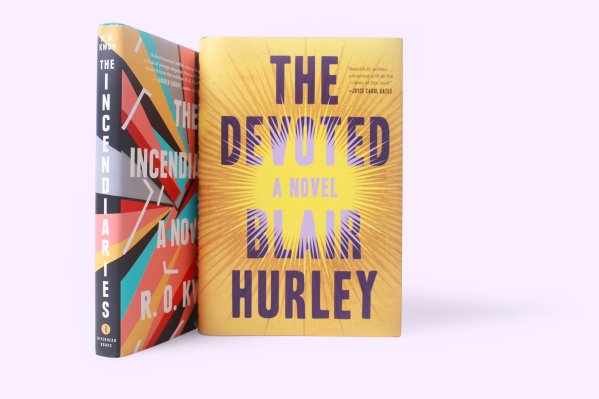