Torrential rains continue to batter the southern Indian state of Kerala for the seventh day in a row, causing widespread flooding and landslides that have led to the deaths of more than 100 people.

As water levels continue to rise, a red alert has been sounded across all districts in the state, which is a popular tourist destination. A red alert warns of extremely bad weather that could cause widespread damage and risk to life, according to the Indian Meteorological Department.

For the first time ever, the state government opened 35 of its 39 dams that had dangerously breached their water levels, adding to the flooding, the Indian Express reports. Officials said 1,568 relief camps have been set up across Kerala, which is home to 33 million people. A major airport has been shut and trains have been disrupted, leaving several hundreds stranded.

Monsoons usually bring heavy rainfall to Kerala every year. But this year’s downpour and subsequent flooding have been cited as the worst in the state in nearly a century. The last time such a deluge ravaged the state was in 1924, when rains lasted for three weeks and submerged several major cities in Kerala.

Indian residents look at the Shiva Temple submerged after the release of water from Idamalayar dam following heavy rains in Kochi on Aug. 9, 2018.
AFP/Getty Images

As incessant rains continue, Indian military and naval forces have been deployed across the state. Many of those stranded in their homes have been airlifted and taken to relief camps. Indian Prime Minister Narendra Modi has also urged the country’s Defense Ministry to step up rescue operations.

Speaking at a press conference Wednesday, Kerala Chief Minister Pinarayi Vijayan said, “Almost all dams are opened, most of our water treatment plants are submerged. As we keep this in mind, our priority is to get food and drinking water to the people.”

Three districts have been rendered inaccessible, making it difficult for those trying to get aid to the those affected. “Most of the roads and highways have disappeared under water or have been destroyed by landslides,” says Radhakrishnan Nair, who has been volunteering with rescue operations in the northern district of Palakkad. Nair says some people, once reached, are reluctant to leave their homes and belongings behind. “The psychologist in our team had to convince them and make them realize the magnitude of the situation before they agreed to leave,” he said.

Shortage of food and potable water remains a primary concern.

“All shops are flooded and closed and we don’t know where to buy food from,” A. Vijayan, a resident of Kerala’s capital, Thiruvananthapuram tells TIME. Vijayan, whose house was submerged following the rains had to wade through chest-deep water to get to safety. He has been living at his workplace since Wednesday while his daughter, accompanied by his sister and family, lives in a relief camp set up by members of a local political party. “My house sustained a lot of destruction and we lost most of our belongings as well.”

According to an early government assessment, 20,000 houses and nearly 6,000 miles of roads have been completely damaged, adding up to a total preliminary loss of almost $1 billion. These figures are likely to increase as the state braces for more rain in the coming days. According to the Indian Meteorological Department, very heavy rainfall is forecast for the next two days. The rains are expected to subside by early next week.

Those involved in rescue operations say rehabilitation efforts after the rain stops would pose a major challenge. “It’s only when these people return home that they will realize the impact of the damage,” says Rina Tripathi, Advisor at Indian Red Cross Society. Speaking to TIME, she said that the group is actively involved in operations on the ground but are facing difficulties owing to continuing rain and lack of connectivity. “We are sending a second batch of relief material so that we can help bring back a semblance of normalcy to those affected.” 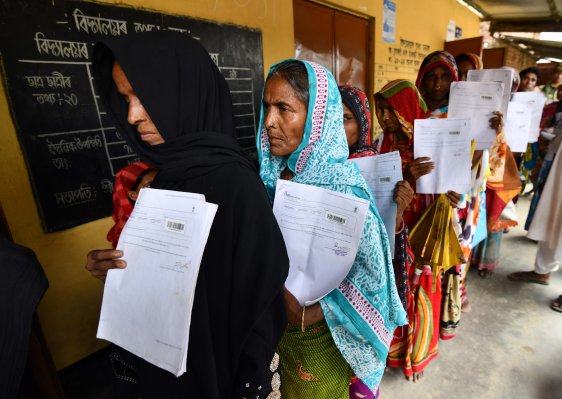