The U.S. announced new visa restrictions against Cambodian officials responsible for “anti-democratic” actions taken in the run-up to the country’s election last month, which was widely condemned by rights groups and international observers as flawed and illegitimate.

The State Department said Wednesday that it was extending a previous round of travel bans passed against an undisclosed number of Cambodia officials in December. The sanctions came amid a crackdown on dissent that disbanded the country’s chief opposition party and left domestic media and independent institutions in tatters ahead of the July 29 national election. In a statement, the White House said the poll was “neither free nor fair and failed to represent the will of the Cambodian people.”

The new visa restrictions will pick out individuals “both within and outside the Cambodian government” responsible for “the most notable anti-democratic actions taken in the run-up to the flawed July 29 election,” State Department spokesperson Heather Nauert said in a press briefing on Wednesday.

The number and identities of those included in the State Department’s new round of visa bans were not released. The Cambodia Democracy Act of 2018, which the U.S. House passed last month, identified 17 figures as potential sanctions targets, including Hun Sen and two of his children, as well as five state ministers and the country’s anti-corruption chief. 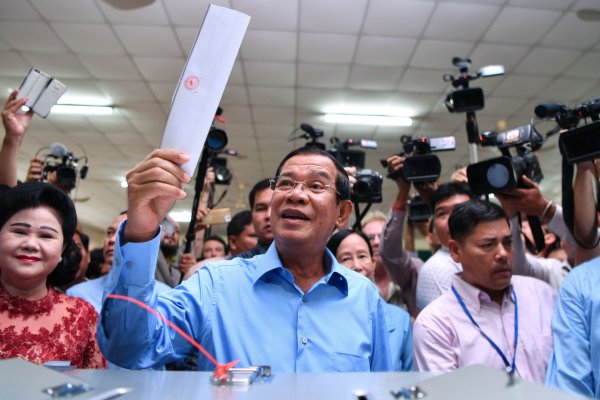 Cambodia's 'Illegitimate' Election Rejected by Opposition
Next Up: Editor's Pick