Closing Arguments Were High Stakes for Manafort's Defense Team. They May Be Higher for Robert Mueller

By Tessa Berenson in Alexandria, Virginia

On the final day of arguments in Paul Manafort’s trial, Judge T.S. Ellis referenced media reports about the instances of him yelling at prosecutors throughout the case. “If you read the newspapers,” the Eastern District of Virginia judge told Justice Department prosecutors, “they win everything, you lose everything.”

It was a lighthearted response—met with laughter in the courtroom— on a day with particularly high stakes for both the defense and the prosecution. Over the past 11 days, the government called 27 witnesses and admitted more than 300 documents into evidence in an effort to prove that Manafort, a longtime political operative and President Donald Trump’s former campaign chairman, committed tax and bank fraud, hiding millions of dollars in overseas accounts and providing false information to banks when he applied for loans.

But Manafort’s defense team made a gamble that is somewhat common in criminal cases: they decided not to call any witnesses of their own. That meant the bulk of their strategy relied on emphasizing the burden of proof to jurors on the final day on Wednesday. When a defense team calls witnesses, it can be tempting for jurors to see two competing stories, with each side needing to prove its version is true. Not calling defense witnesses can help highlight to jurors that the full burden of proof is on the prosecution.

“We believe,” defense attorney Richard Westling explained of why they didn’t call any witnesses, “the government has not met that burden.”

For government prosecutors, the closing statement carried more than just the weight of the case against Manafort. This trial may not be directly related to Trump or Russian meddling in the 2016 election, but it is still the first to result from special counsel Robert Mueller’s investigation. As the President continues to refer to the investigation as “rigged” and a “witch hunt,” a conviction in its first major case could help the investigators prove its legitimacy to a skeptical public.

“When you follow the trail of Mr. Manafort’s money,” said prosecutor Greg Andres, “it is littered with lies.”

Downing, who cross examined Gates, said that Gates “fell apart, and he was seen for who he is” during his testimony. Downing sneered that Gates “came in here trying to look all clean-shaven” (Gates had recently been sporting a beard, but shaved before his appearance in court) and alleged that Gates lied to the jury. “Once you discredit Mr. Gates,” Downing said, “then the government has had a major failing in here.”

The defense tried to sow doubt in jurors’ minds about the government’s motives: Westling noted that it wasn’t “until the special counsel showed up and started asking questions” that any banks came forward with fraud concerns, and that the government was “stacking” charges against Manafort “to give you a sense that everything is so overwhelming that there is only one conclusion.” Downing said the government is “desperate” to make a case against Manafort.

Defense lawyers even argued that the sheer volume of evidence the government mounted proves that Manafort was not engaged in fraud. “Fraud is about secrecy at its very core,” said Westling. If there was a scheme to conceal foreign accounts, Downing continued, “You would have to believe Mr. Manafort was trying to hide stuff from the government.” Yet there is “a clear trail,” according to Downing, back to his Cypriot bank accounts.

Prosecutors got the final word. In a 20-minute rebuttal, Andres was visibly more heated than he had appeared during his nearly two-hour closing argument Wednesday morning, and speaking faster to fit into the time Judge Ellis had allotted him. Andres brought jurors again through some of the prosecution’s key evidence in the case, trying to use the “clear trail” of documents, as Downing called it, to his advantage to tell a cohesive story.

“The defense,” Andres said, “is asking you to ignore your own common sense.”

Now it’s up to the jury to decide. 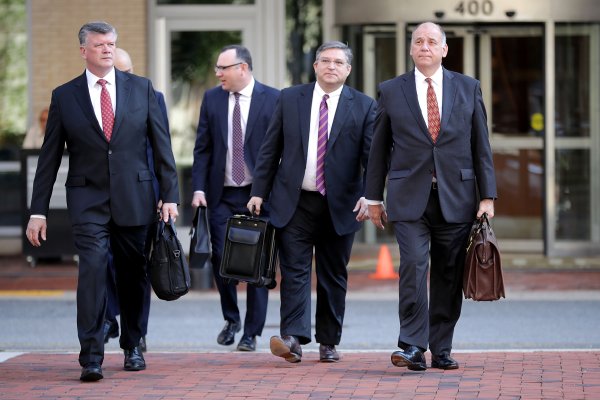 Manafort's Defense Rests Without Calling Witnesses
Next Up: Editor's Pick