He Almost Died Doing One of the Riskiest Jobs in Firefighting. Inside the Lives of California's Wildfire Bulldozer Operators

Bulldozers clear a fire break in Kelso Valley, at the head of the wildfire, near Lake Isabella, Calif., on June 24, 2016.
Marcus Yam—LA Times via Getty Images
By Jennifer Calfas

Perched on a ridge in the Angeles National Forest in Southern California just hours after the Creek fire sparked on Dec. 5, 2017, the veteran firefighter parked the bulldozer he was operating to build a strong containment line to stop the fire’s path. Gusts of wind brought in smoke and haze from the fresh inferno, and, within seconds, he couldn’t see anything through the window of his bulldozer.

But, while parked, his bulldozer shifted in what he initially thought was an optical illusion. Suddenly he and his 30,000-pound machine were tumbling more than 180 feet down a vertical drop. Somehow, Carter recalls, he was able to escape the bulldozer when it landed in a dry riverbed, far from where his fellow firefighters worked in the early hours of the fire that went on to destroy more than 100 homes and buildings. He radioed his colleagues who pulled him out and saved his life just minutes before the fire spread to the area and burned it over.

Carter, who at 43 years old has been operating bulldozers on fires for more than 13 years, survived. Covered in bruises, he stayed in the hospital for three days, got 20 stitches on his forehead and was treated for internal swelling and a tear in his shoulder. He didn’t return to his job as a heavy fire equipment operator for six months.

“It’s a little overwhelming,” Carter, who is now back to work at the Los Angeles City Fire Department, tells TIME. “I’ve always known the dangers of it. But to have this happen to me is an eye opener.”

Some of his colleagues have not been so lucky. Two bulldozer operators have died this year while fighting fires in California — marking the first deaths in the profession in two years, and what could be the first time two dozer operators died in one season.

Braden Varney, a 36-year-old heavy equipment operator, and Don Ray Smith, an 81-year-old private contract operator, both died in July while working to contain two different fires. Varney was working to contain the massive Ferguson fire burning in a remote area near Yosemite National Park when his 42,320-pound bulldozer slipped three times before tumbling down a 220-foot slope, killing Varney, according to Cal Fire’s report. The area was so remote, officials said, it took three days to remove his body from the site.

Carter, who survived a similar altercation eight months earlier, felt like he had the wind knocked out of him when he heard of Varney’s death. (The two of them completed the bulldozer training academy together.) “It was hard to look back and realize how easily that could’ve been me,” says Carter.

“I hate to say we’re getting used to going to funerals, but I’ve been to quite a few,” says Scott Price, a dozer operator with the Ventura County Fire Department in Southern California. “It’s like we’re soldiers, and these are our war buddies getting shot. But now we still have to do our business.”

The deaths — and near-deaths — of these bulldozer operators expose the heightened dangers they face when operating tens of thousands of pounds of equipment near a burning fire — especially as more intense fire seasons make their jobs more precarious and unpredictable. Among the thousands of firefighters across the state, there are less than 200 bulldozer operators who use their vehicles to create containment lines on the state’s biggest and fastest-moving fires. Now, dozens bulldozer operators are being deployed to help fight three aggressive, fast-moving infernos that scorched tens of thousands of acres across the state this week and killed at least five people. A bulldozer was even used to clear abandoned cars out of the way of a Butte County area hospital in Paradise, Calif., to help rescuers evacuate patients Thursday.

Operators use the blades attached to their bulldozers to create a hefty, dirt path — removing flammable brush, grass and trees directly alongside a burning fire, that, in theory, will stop the fire from spreading. Firefighters use tools to build containment lines on foot as well, but the bulldozers build them faster and more efficiently — serving as a vital mechanism especially when resources and personnel are limited.

“(Bulldozer operators) are of immense value where you can deploy them,” says J. Keith Gilless, a professor of forest economics at the University of California, Berkeley. “They’re a force multiplier.”

Sometimes alone and at night, operators navigate tricky terrain — from rocky, steep surfaces to soft, loose sand that easily breaks loose and could prompt the vehicle to tumble over — all while a hot, aggressive fire burns next to them. And bulldozer operators have experienced harsher conditions in recent years.

The lingering effects of a six-year drought, bone-dry vegetation and record-setting temperatures across California have made fires more aggressive, faster moving and larger than ever before. That makes it difficult for firefighters and these dozer operators to keep up when building containment lines. Like their companions working more traditional firefighting jobs, these operators work anywhere from 16-hour to 24-hour shifts, often away from home for weeks at a time fighting fire after fire.

Following the recent deaths and injuries, some bulldozer operators are calling for better safety measures to prevent further losses among their ranks. State and county fire agencies have long held the belief that the safety of these operators is paramount — but what exactly is required for bulldozer operators is up for debate within the community, with some operators rejecting the use of safety equipment like helmets citing decades of tradition in the profession.

“We’re not invincible,” says Douglas Dolezel, who has operated bulldozers for the Sacramento Fire District for more than 20 years. “We need to pay attention to what we’re doing. What are we trying to save, and will what we’re doing now make it better?”

Standard protocols are a bit different for which agency an operator works for — some are employed by the state’s Department of Forestry and Fire Protection, some by county fire departments and others through private contract work. Typically, operators are advised to wear a Nomex suit, helmet, goggles and gloves, and drive a dozer equipped with a seatbelt, protective curtains, a shovel or axe, a fire extinguisher and backup alarm, among other necessities. Operators often carry radios, too, to be able to communicate with their colleagues for logistical reasons — or in emergencies.

Carter, who survived when his bulldozer rolled over last December, credits his helmet and radio with saving his life. Without his helmet, he says doctors warned he would have suffered five to six cracks in his skull. Without his radio, he would not have been able to quickly contact his colleagues to come rescue him.

Following his brush with death, Carter says he was inspired to push for greater safety efforts within his profession like encouraging more departments to require helmets. He has received pushback from some due to their hefty cost — they’re about $2,000 a pop — but requiring them should be a no-brainer, he says.

No matter the agency they work for, dozer operators from all over the state communicate with each other regularly, whether that be through discussions in private Facebook groups or the more official California Dozer Operator Group, which meets once a year to discuss safety precautions and the ever-changing fire season. Their constant communication can serve as a kind of “therapy,” Carter says. In the days after his near-death experience, he shared vivid photos of his injuries and the crash itself in a private Facebook group — and was greeted with more than 100 messages from colleagues wishing him well.

“We understand that our bodies are going to get beat up. There’s a chance of becoming maimed, badly scarred or not making it. It’s one of those things that we took on,” says Dolezel, the operator from Sacramento. “But when the end comes, and you’ve saved somebody’s house or saved someone’s farmland or helped a citizen, that’s what it really comes down to. It’s just about helping your fellow human.”

The original version of this story misstated Braden Varney’s first name. It is Braden, not Brandon. 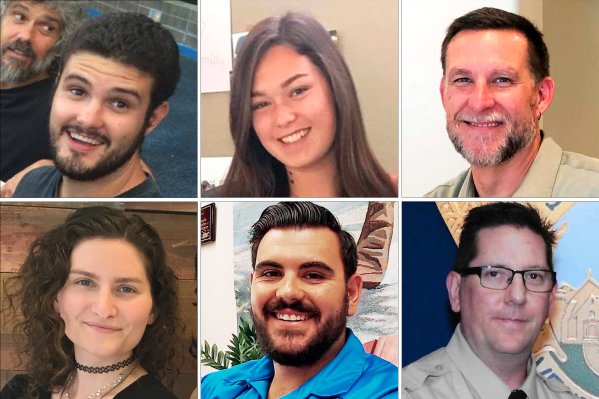