As a child, Monica Lau rarely had problems falling asleep. So at 57, and after two decades of practicing Buddhist meditation, loud noise, cramped space, and bright lights don’t faze her, she says. The latter actually make it easier to nod off in a local 24-hour McDonald’s restaurant, knowing people won’t steal her stuff.

Shortly after midnight on a recent Thursday, Lau and her wheelie bag occupied a table and chair set beneath a poster that advertised taro McFlurries. The McDonald’s restaurant in Hong Kong’s working class To Kwa Wan neighborhood—replete with red foam accents, mirrored pillars and a ceiling latticed with spotlights—seemed a jittery place to pass the night. “I’m not a light sleeper,” Lau says. There’s air conditioning. She uses the free WiFi to watch videos, play mobile phone games, and chat with friends, “then I’ll end up dozing off.”

Lau’s forbearance is exceptional, but her circumstances are not. In fact, people who sleep in fast food restaurants in some of the world’s richest cities are common enough to have their own sobriquet—McRefugees. What’s surprising about her predicament is that, like more than 70% of Hong Kong McRefugees interviewed for a new survey on the issue, Lau is not technically homeless.

So called McRefugees gained brief notoriety in 2015 when CCTV footage revealed that an elderly woman had lain dead in a Hong Kong restaurant for hours as oblivious diners munched on their fries; similar situations are present in other Asian metropolises like Beijing and Tokyo—where some 4,000 people without stable residences also take shelter in gaming or Internet cafes. But while there has been a sharp increase in Hong Kong’s homeless (up 22% in the last year and more than 50% on 2013/2014 by government numbers), and while charity workers found that homelessness contributed to many people spending the night in McDondalds, many respondents’ domestic situations were simply so dismal as to make a night under the golden arches more appealing. Other reasons for bedding down beneath the Golden Arches include family estrangement and mental health issues.

Local non-profit Junior Chambers International Tai Ping Shan (JCI) counted 334 people spending the night in Hong Kong’s 116 24-hour McDonald’s restaurants in June and July—that’s an almost six-fold increase on a similar survey conducted in 2013, which counted 57, the survey’s chairwoman Jennifer Hung tells TIME. JCI’s volunteers were able to conduct in-depth interviews with 53 of the people they counted and found that not only did most have a home but more than half had “either full time, part time, or self-employed work,” she says.

A 'McRefugee' sleeps in a restaurant in Hong Kong.
Aria Chen

A few booths down from Lau in the same To Kwa Wan McDonald’s, Pilee Liu pored over a newspaper near a man laid up on a Formica bench.

Gaunt under a checkered shirt and thick-framed glasses, Liu tells TIME that he does not stay until morning because sleeping here is “not elegant” but he comes in for a couple of hours on hot nights and might “close [his] eyes for a few moments.”

Like Lau, 55-year-old Liu is not technically homeless. He receives welfare and hangs out at a public library where he reads magazines and books about investment—but he does odd jobs and janitorial work. That earns him enough to rents a 6ft by 7ft cubbyhole in a nearby building for 1,300 Hong Kong dollars ($166). On summer nights, though, he has no choice but to get out.

“I can’t sleep at all because my room has no windows and no air conditioning,” he says. “There are cockroaches, mosquitoes. Bed bugs, once in a while. I wish I could transfer to another house but I can’t afford it.”

Around 210,000 Hongkongers live in subdivided homes like Liu’s, according to government statistics. Chan Chung Yin, a homelessness expert at local Society for Community Organization (SOCO) tells TIME that many McRefugees’ homes do not have air-conditioning through Hong Kong’s sweltering, humid summers. “In their house it is maybe over 36C (97F) or 38C (100F), so they face a lot of difficulties,” he says. Vermin and grime also conspire to make snatching even a few hours sleep impossible.

Though the amount he pays for his home in To Kwa Wan is a steal by local standards, that Liu cannot afford to move is unsurprising. Even smaller bed spaces in subdivided flats—colloquially termed coffin homes—tend to cost between 2,200 and 2,500 Hong Kong dollars ($280 to $318) for a top berth, rising as high as $2,800 ($357) for a bottom berth, Chan says. A 500-600 square foot unit might accommodate 16 to 20 people, he adds.

Read more: In the World’s Most Expensive City, 1 in 10 Maids Sleeps in a Kitchen, Toilet, or Corner of the Living Room

“The rooms become smaller and smaller but people have to pay higher and higher rent,” Wong Hung an associate professor at the Chinese University of Hong Kong’s department of social work tells TIME. “Although rent is also very high in cities like Singapore and Tokyo, eligible flats there are much larger.”

Hong Kong’s stratospheric rents are propelled by what Hung calls the “rocket rate” increase of house prices, driven in part by an influx of hot money from the mainland. “There are a lot of government policies to try to deter the rising price, but every policy has failed,” Hung says.

Anti-establishment lawmaker and social activist Eddie Chu is blunter: “The Hong Kong government is the landlord of this place,” he says, “all of the land is given to developers by lease hold, so the government has the power to take whatever land they want back and to turn it into affordable housing. ”

Superlatively priced apartments are perennial headline makers in the city: in 2016, a one-bedroom apartment—situated, ironically, on Welfare Road—went on the market for $2.8 million. In 2017, TIME reported on a four-bedroom property that boasted of comely but hardly palatial features such as “large windows” and “a nicely fitted out walk-in closet” went on sale for $87.3million—or $21,190 per square foot. And in April this year, another four-bedroom house became Asia’s second most expensive in square foot terms, selling for $177.3 million, according the South China Morning Post.

For most young people, home ownership has become a whimsical idea. Hong Kong has been the world’s most unaffordable housing market for eight years running according to U.S. planning consultancy Demographia, which found that the median property price in the city was 19.4 times the median annual income in 2017, up from 18.1 times the median income the year before. In the public sector it’s no better: families can face a five-year wait for public housing, according to SOCO, and a 40-year-old singleton can wait more than 25 years.

A 'McRefugee' sleeps in a restaurant in Hong Kong
Aria Chen

‘We welcome all walks of life’

Monica Lau had been an accountant for 20 years, when a hot cooking pot fell on her foot in 2008 and forced her to stop work. On a waiting list for public housing, Lau now volunteers at a Buddhist temple and sleeps in McDonald’s. But she still pays 8000 Hong Kong dollars ($1,020) per month for a windowless room behind a fishmonger’s. When she moved in five years ago, the rent was a more manageable $2,500 ($320). It has more than tripled since a planned railway extension put the building on a list to be demolished. Lau is set to receive compensation from the government if she can stick it out. “I’m counting on this,” she says, “if I leave I won’t be able to get the public allowance.”

By early Thursday morning, TIME had counted more than a dozen other people either asleep or preparing to bed down across three 24-hour McDonald’s known for having McRefugees. In two, staff had turned off some of the restaurant’s lights to create a more restful environment. In a statement, a spokeswoman for McDonald’s Hong Kong told TIME the restaurant is “committed to providing a pleasant dining environment to our customers and we welcome all walks of life to visit our restaurants at any time.”

“We would basically not disturb our customers but would be attentive to customer requests and promptly deliver our service when needed,” the statement also said.

In To Kwa Wan, Lau, like 65% of McRefugees JCI volunteers interviewed, says her interactions with restaurant staffers have been positive. In fact, it’s other customers who are more likely to be a nuisance. On one occasion, she remembers, staff turned the AC on full blast to deter a rowdy group from staying. “It was like the North Pole,” she says. “When I woke up all the other guys were gone but I was fine because I had a jacket.”

Then Lau falls silent. The only other sounds are the hum of an air-conditioner and the somnolent breath of a man face down at a nearby table. 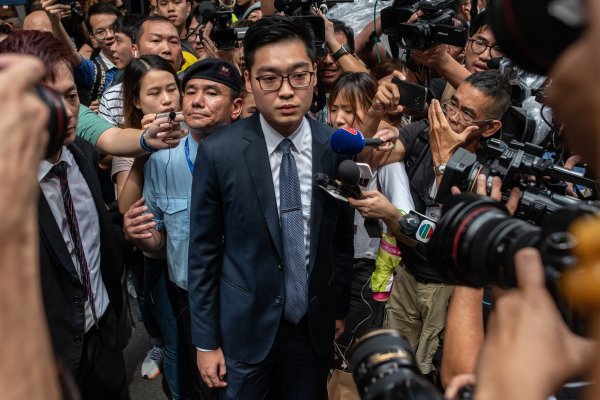