Jeremy Corbyn, the leader of the U.K.’s main opposition party, has been accused of laying a wreath on the graves of Palestinian terrorists who masterminded the 1972 Munich massacre, as his party is embroiled in a deepening anti-semitism dispute.

Photographs published in right-wing tabloid newspaper the Daily Mail purport to show Corbyn in 2014, before he became leader of the left-leaning Labour Party, standing in front of a commemorative plaque at the graves of four Palestinians involved in the Munich attack.

Eleven Israelis were killed in Munich in 1972, when Palestinian militants took Israeli Olympic team members hostage at a hotel in an attack which played out over live television. The Mail’s revelations seemed to be supported by Corbyn’s own writings from soon after the visit. “Wreaths were laid at the graves of those who died on that day and on the graves of others killed by Mossad agents in Paris in 1991,” he wrote in the Morning Star socialist newspaper.

Corbyn later claimed that the ceremony, held in 2014, was to commemorate those who died in an Israeli air strike on the Palestinian Liberation Organization (PLO) headquarters in Tunis in 1985. But the newspaper said those graves were 15 yards away from the site in the photograph.

“There appears to be no record of Mossad having carried out an assassination in Paris in 1991,” the Mail says, in reference to Corbyn’s article. However, Atef Bseiso – one of the four terrorists buried at the cemetery – is alleged to have been killed in Paris by Mossad in 1992.

Although the Labour Party initially released a statement denying the reports, Corbyn admitted on Monday that he had been at the ceremony. “I was present at that wreath-laying, I don’t think I was actually involved in it,” he said. “I was there because I wanted to see a fitting memorial to everyone who has died in every terrorist incident everywhere. Because we have to end it. You cannot pursue peace by a cycle of violence, the only way you can pursue peace [is] by a cycle of dialogue.”

The U.K’s interior minister Sajid Javid suggested in a tweet that Corbyn should resign. “If this was the leader of any other major political party, he or she would be gone by now,” he wrote on Sunday.

The controversy over the photograph comes as the Labour Party leadership has been criticized by lawmakers and Jewish civil society groups for not doing enough to stamp out antisemitism within the party.

Corbyn was opposed to Labour adopting a definition of antisemitism which would make comparing current Israeli policy to that of Nazi Germany ‘antisemitic.’ The party’s current stance on antisemitism includes the following statement: “Discourse about international politics often employs metaphors drawn from examples of historic misconduct. It is not antisemitism to criticise the conduct or policies of the Israeli state by reference to such examples unless there is evidence of antisemitic intent.”

But the U.K.’s Chief Rabbi Ephraim Mirvis said those guidelines show an “unprecedented contempt” for British Jews. “It is astonishing that the Labour Party presumes that it is more qualified than […] the Jewish community, to define antisemitism,” Mirvis said.

The dispute over the memorial carries echoes of the Bitburg controversy, when U.S. President Ronald Reagan visited a German graveyard found to contain the remains of SS soldiers.

In remarks that caused controversy afterwards, Reagan said: “These [SS troops] were the villains, as we know, that conducted the persecutions and all. But there are 2,000 graves there, and most of those, the average age is about 18. I think that there’s nothing wrong with visiting that cemetery where those young men are victims of Nazism also, even though they were fighting in the German uniform, drafted into service to carry out the hateful wishes of the Nazis. They were victims, just as surely as the victims in the concentration camps.” 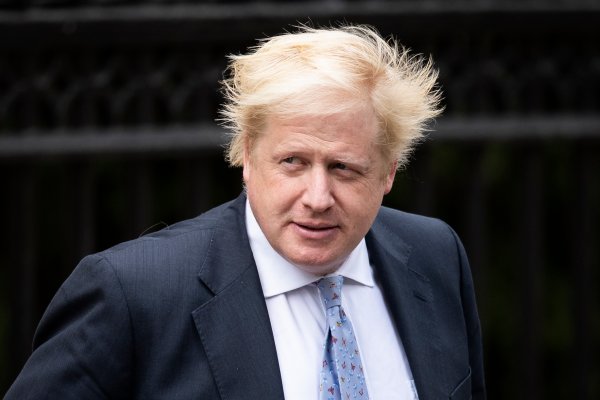 Boris Johnson Has Caused a Political Firestorm After Offending British Muslims. Here's What to Know
Next Up: Editor's Pick