The Era of the Swing Justice Is Over. Here's How Democrats May Adapt

When Supreme Court Justice Anthony Kennedy announced his retirement in June, Avery Gardiner began saying “No, no, no” at her desk so loudly that she interrupted a meeting in a conference room next door.

The co-president of the Brady Campaign to Prevent Gun Violence knew then that Kennedy, who has historically been a swing vote for the Court — occasionally siding with liberals on a few key cases — would likely be replaced by a more consistent and stalwart conservative. Although Kennedy joined with the conservative majority on pro-gun rights decisions, the Court has passed up every opportunity to hear a Second Amendment case since 2010. Gardiner and other liberals worry that could change without Kennedy’s moderating presence on the court.

“It was immediately obvious that Justice Kennedy’s retirement was a terrible development for those of us who care about gun violence prevention,” she said.

It isn’t just gun control groups who are worried about a newly emboldened conservative bloc on the Supreme Court if Trump’s nominee to replace Kennedy, Brett Kavanaugh, is confirmed. Advocates for everything from abortion to same-sex marriage to affirmative action are concerned that the court will not only rule more consistently against them, but also take on issues it has avoided in recent years.

At the same time, some see an opportunity for liberals to begin building a counterweight to the powerful conservative legal machine that helped elect Trump and gave him the opportunity to name two originalist justices to the nation’s highest court.

Colin Strother, a Democratic strategist based in Texas, is urging his party to adapt.

“We’re going to have to figure out how to talk about Supreme Court issues in a way that resonates with voters. It’s not something that we’ve really done in the past,” he said. “It’s a skill we need to acquire quickly and get good at fast.”

The era of the swing justice is ending

For now, many progressive groups are primarily focused on trying to block Kavanaugh’s confirmation. Republicans have a 51-person majority in the Senate, but with Sen. John McCain fighting brain cancer and unlikely to vote, they can afford only one defection. Liberal activists are targeting GOP senators such as Susan Collins of Maine and Lisa Murkowski of Alaska, while trying to ensure they don’t lose any red-state Democrats who are up for re-election, including Heidi Heitkamp of North Dakota, Joe Donnelly of Indiana, and Joe Manchin of West Virginia.

“We have the fight that’s directly in front of us, and that is to stop Kavanaugh,” said Tim Hogan, who is a spokesman for Health Care Voter, an organization that supports the Affordable Care Act. “I think that is where all of our energy is focused.”

But court watchers say that’s an uphill battle. Josh Chafetz, a law professor at Cornell, said that Kavanaugh will likely be confirmed in these political circumstances due to his credentials as a federal judge. And, in the event that he is blocked, Democrats would have to regain control of the Senate in the midterm elections to leverage Trump to nominate a more moderate candidate.

“But overall, that seems really unlikely because it relies on both of two fairly unlikely things happening,” he said.

Even then, Senate Republicans could still confirm a justice during the lame-duck session before the new Congress takes office, and Trump has pledged to only nominate judges from a list of conservatives that he put out during the campaign.

In short, as some pundits say, the era of the swing justice may be coming to an end at the Supreme Court for the foreseeable future.

The justices on Trump’s list are more reliably conservative than Kennedy, who had a reputation for being a swing justice. Although Kennedy leaned conservative on 71% of close cases with a five-justice majority, he joined liberals to cast deciding votes on key social issues — legalizing gay marriage, reaffirming Roe v. Wade and upholding affirmative action practices.

David Fontana, a law professor at George Washington University, said that the court is much more likely to be polarized along partisan lines than it has been in recent years, noting that there are two kinds of swing vote.

He said that Chief Justice John Roberts would now the be Court’s median justice. Roberts has historically been a more consistently conservative vote than Kennedy, but Fontana notes he may be weighting the court’s reputation and legitimacy more heavily in the future. “If the court has your name on it, you have a different set of interests,” he explained.

Chafetz agreed that, for that reason, the court’s ideological change may not be as drastic as people expect. However, he does expect some kind of shift. Trump’s nominee “would push it [the court] a little bit more to the right,” he said.

It took years for conservatives to get to this point.

Because seats on the Supreme Court open up only when a justice retires or dies, it’s very hard for a political party to ensure that it fills an opening. The last four presidents — both Bushes, Clinton and Obama — each confirmed two justices to the Court, while Jimmy Carter named none.

Some Republican appointees, such as retired Justice David Souter, turned out to be more moderate than conservatives had hoped, while others, such as Kennedy and retired Justice Sandra Day O’Connor, sided with liberals on some high-profile issues.

“I think the Federalist Society has basically become a legal arm of the Republican party establishment,” said Chafetz.

At the same time, Republicans running for office mobilized voters against the landmark Roe v. Wade decision affirming a constitutional right to abortion. “Of course, Roe v. Wade lives large in the minds of the Republican party,” said Justin Driver, a professor at the University of Chicago’s law school. “We are now 45 years away from Roe v. Wade. It is unusually durable as a controversial decision.”

The Republican Party has capitalized on anti-abortion rallying cries to help turn out the vote. In 2016, Senate Majority Leader Mitch McConnell refused to hold a vote on an Obama appointee to the Supreme Court, paving the way for Trump to name Neil Gorsuch after the election.

Political strategists say that overall, Republicans have recently done a better job of mobilizing their party around the Court. Exit polls show that the Supreme Court vacancy mattered more to Trump voters than it did to Clinton voters.

Rodell Mollineau, a Democratic strategist at Rokk Solutions, cited the 2016 election as a failure on Democrats’ part to prioritize Supreme Court messaging.

“Hindsight is twenty-twenty but we certainly had some motivation problems on our side, I think, in 2016,” he said. “Perhaps if we had a message on gaining the Presidency would mean this for the court … that could have been a motivating factor to get some other people to vote.”

Now, some liberal strategists think it’s past time for Democrats to adopt these conservative strategies.

“I think we can take a page from their playbook and look at how they went about educating people on Supreme Court rulings and then use those tools to educate our own voters about what they can do to protect their rights,” said Strother.

Jesse Ferguson, a Democratic strategist and former deputy national press secretary for Hillary Clinton’s presidential campaign, points to already-existing Democratic energy around the Citizens United decision allowing companies to donate to campaigns. “If the court takes that kind of a turn on issues like overturning Roe or overturning healthcare, we can expect that fight to be even more central,” he said.

“I think it will be more of a voting issue for those Democrats and independents if a Republican court tries to take away protections and rights that the majority of the country expect to maintain,” he added.

If the court does end up without an impactful swing justice, it would not be the first time.

In the 1930s, President Franklin Delano Roosevelt was frustrated by a Supreme Court that was hostile to central parts of the New Deal. He floated an ultimately unsuccessful plan to increase the number of justices on the bench — essentially packing the court — until the court eventually backed down. When vacancies opened up later during his presidency, he filled the bench with justices who were more aligned with him.

Though the court-packing proposal is generally considered one of FDR’s failures, some experts see it as a lesson on how a liberal president could use public opinion against a conservative court.

“What FDR did, essentially, is he went public,” said Chafetz. “He gives a series of speeches attacking the Supreme Court and then threatens to pack the court — to increase the size of the court to get a majority. There’s a backlash to that, so he doesn’t get court packing through, but he does ultimately win the political fight.”

He said if the court does become solidly conservative, it could drive liberal politicians to adopt the tactics of Roosevelt and Nixon.

Even if they don’t target the court directly, some Democratic strategists think that the party will have to adapt politically, playing the long-game to accomplish their liberal agenda.

Marj Halperin, a Democratic analyst at WGN-TV, says that congressional Democrats will have to be strategic about the way they frame their policy solutions. “I think the approach is to pass legislation we think has the best chance of surviving a court challenge based on the makeup of the Supreme Court as we know it,” she said.

If that doesn’t work, Ferguson says the party could rely more heavily on state and local governments to drive their agenda. “It’s why these gubernatorial and state legislative elections are so vitally important,” he said. “Because the first firewall against Trump’s agenda would be Democrats controlling Congress. But the second firewall, and one that may be more indelible, is Democratic strength in states and local governments.”

Either way, a conservative Court is going to be an ongoing challenge that Democrats may grapple with for decades. 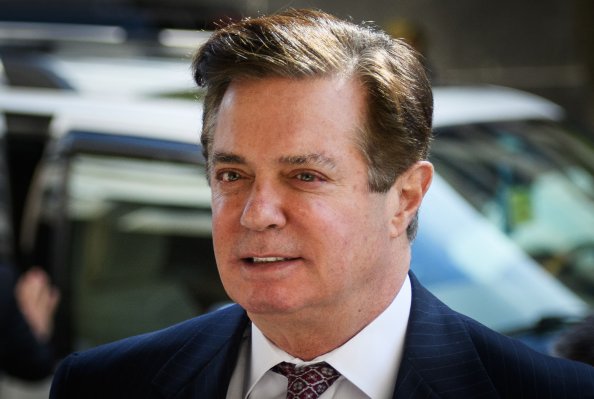 Manafort's Lavish Life on Trial
Next Up: Editor's Pick