Vice President Mike Pence presented the plan for Space Force, the newly proposed space-based branch of the military, at the Pentagon on Thursday and Stephen Colbert had a jab about his selection for the job. “Pence is a huge fan of space,” Colbert said on The Late Show. “It is the farthest you can get from being alone with a human woman.”

“We don’t need Space Force,” he added. “Please wait until NASA finds life before you try to kill it.”

Colbert also skewered Trump’s enthusiastic tweet that read: “Space Force all the way!” “Space Force, you know I love it,” Colbert said in his Trump impersonation. “I of course would join, but I have space spurs, I can’t do it.”

Colbert was also inspired by an email was sent out to Trump supporters on Thursday afternoon, asking them to vote for their favorite Space Force insignia, even though “the final choice will be made by the Electoral Space College,” Colbert joked. Trump supporters had six designs to choose from but Colbert had a few more ideas to add to the mix, including a special U.S.-Russia logo that read, “In space, no one can hear you collude.”

Watch Stephen Colbert spoof Space Force in the video below. 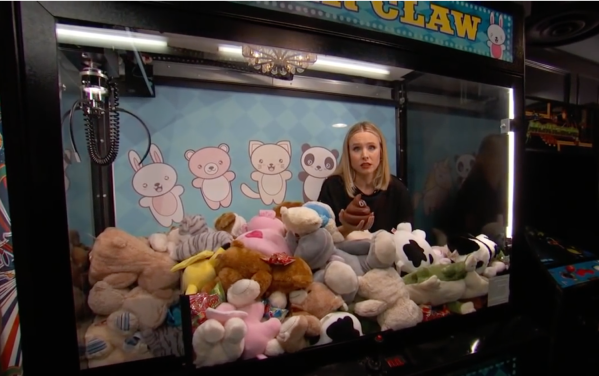 Only Kristen Bell Could Make Getting Trapped in a Claw Machine Look This Awesome
Next Up: Editor's Pick